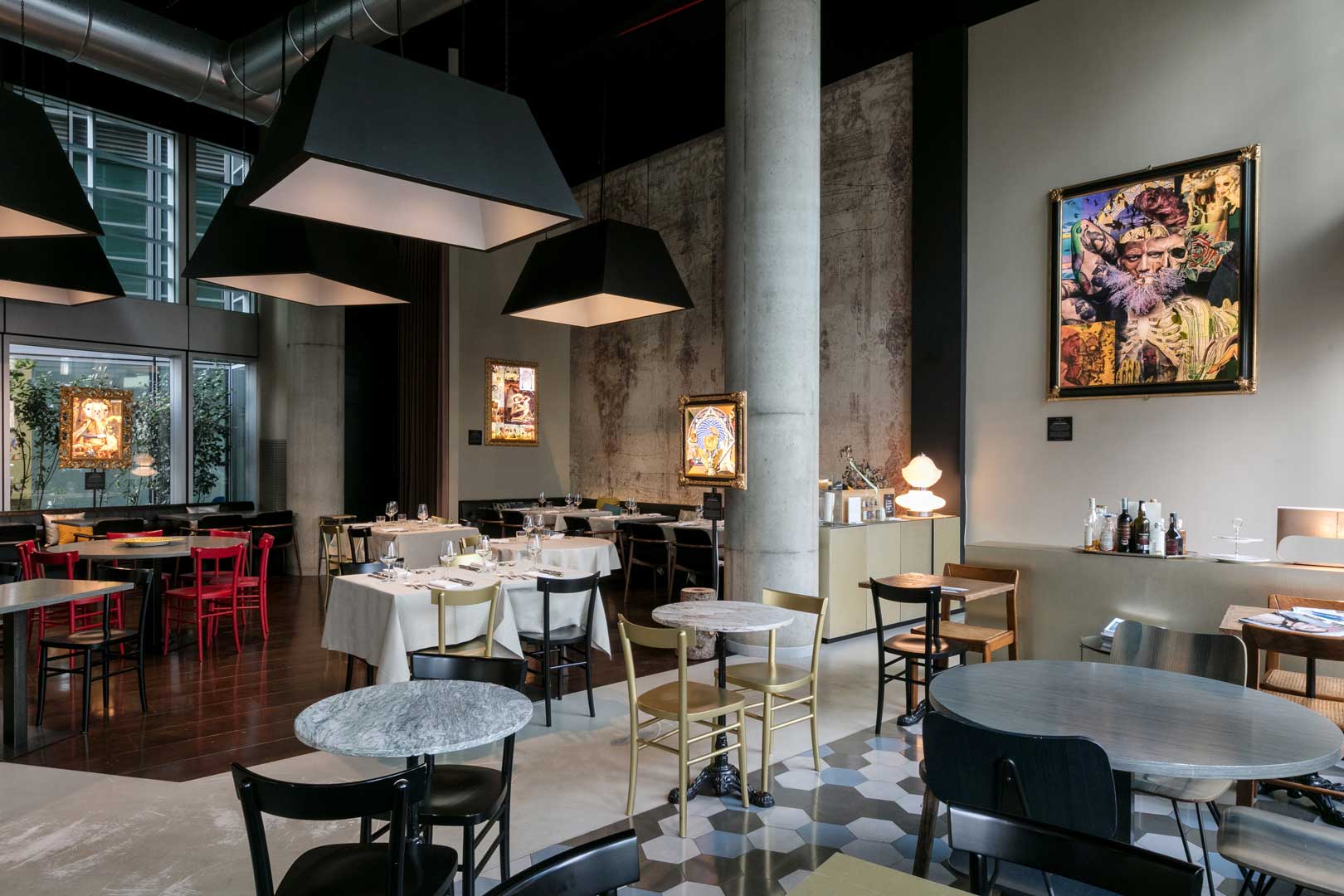 When art and gastronomy meet

It defines itself as a modern bistro even in its name, but Il Santa, at Palazzo Lombardia, is much, much more than that. Those who enter immediately perceive that it isn’t a restaurant like the others: its architecture dialogues and breathes side by side with that of the colossal Palazzo della Regione and shares with it its windows, high ceilings and daring views. This constant dialogue, this symbiosis and transpiration between the two worlds, that of gastronomy and that of design, is felt and seen from the furnishings of the room to the last of the dishes on the menu. 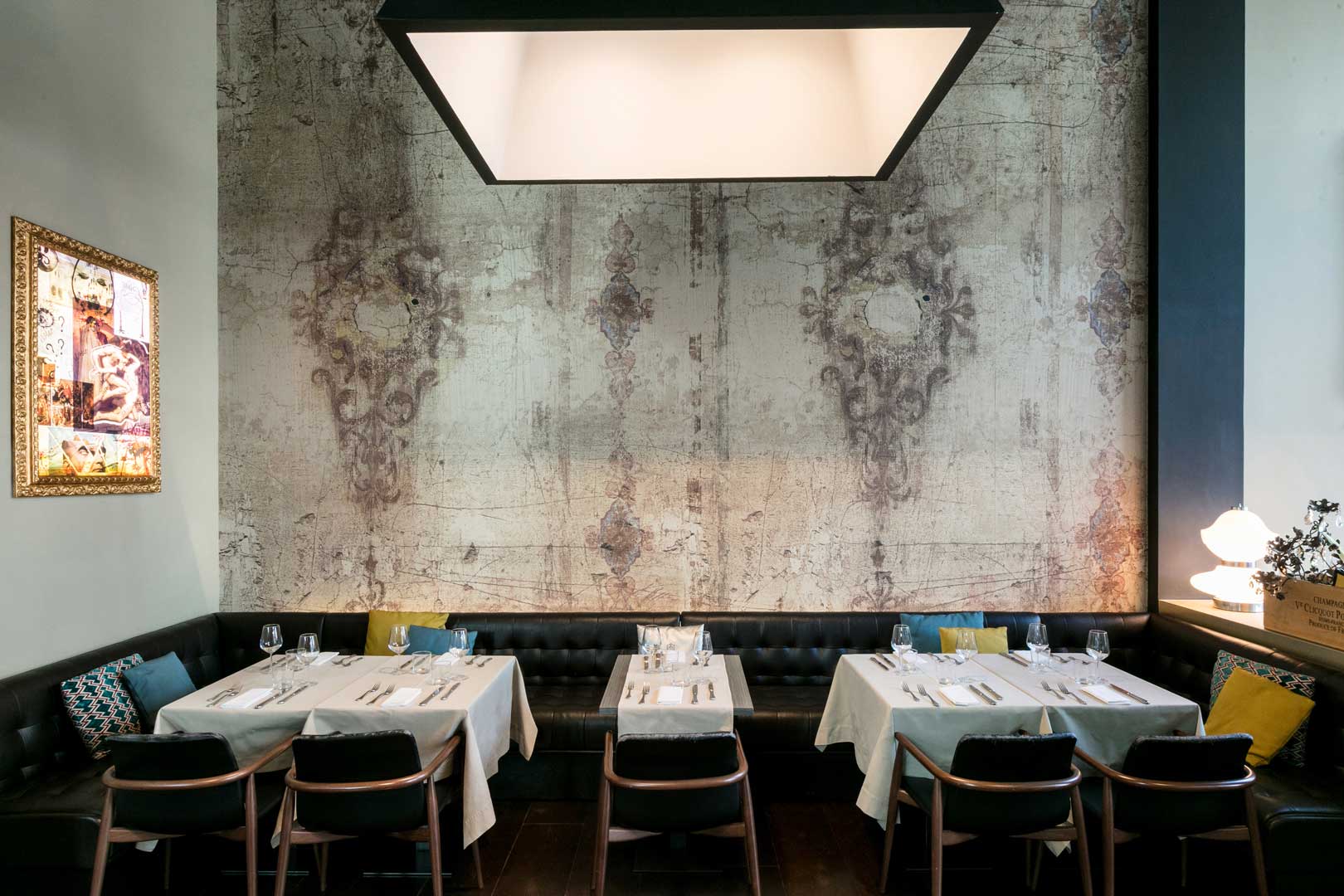 It’s clear that this mutual exchange, or better still, this fusion between the art of food and that of design couldn’t take place without a mind, a personality, a central soul that organizes around itself this microcosm of lines and flavors, of decor and sensations, as the nucleus of an atom organizes around itself the electrons that surround it. This central core is chef Stefano Grandi, always at work in the kitchen and in his mind, constantly looking for the last frontier to be conquered. 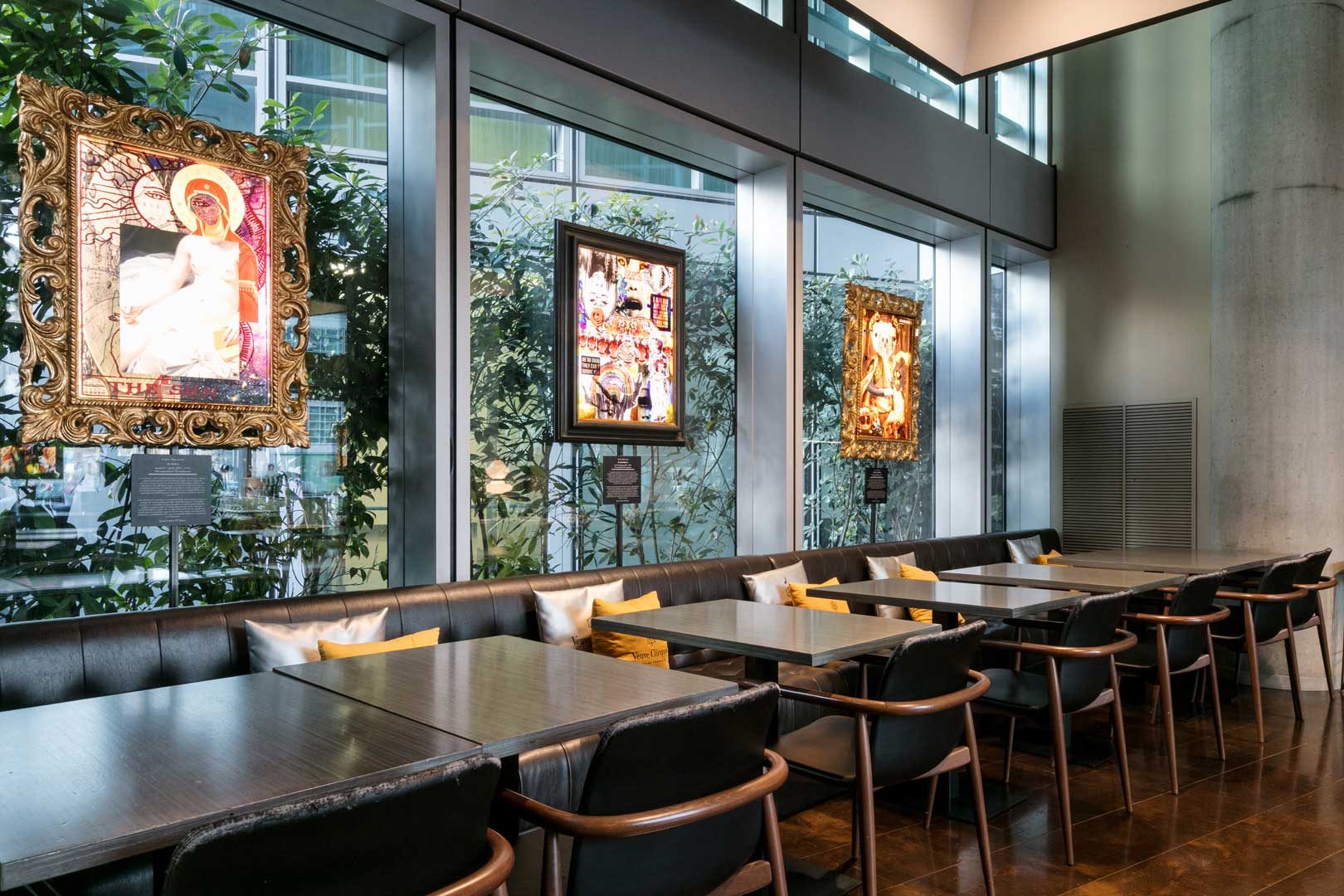 His personality and vision saturate every corner of Il Santa, making this restaurant a living organism, a crossroads for the trends that circulate in the blood of Milan itself. Impossible, then, to be surprised knowing that for the next Design Week, from Tuesday April 17th to Sunday 22nd, the restaurant will become a place of exchange and dialogue with the world of art and design thanks to JOY DESIGN. Two established artists and designers, Margherita Premuroso and Stefano Rossetti, will present their works and installations both inside and outside the restaurant of chef Grandi. The “OrtodiSegni” works by Margherita Premuroso are recognizable by their mixture of traditional and modern techniques, while Stefano Rossetti’s installations reflect on the integration of different cultures. 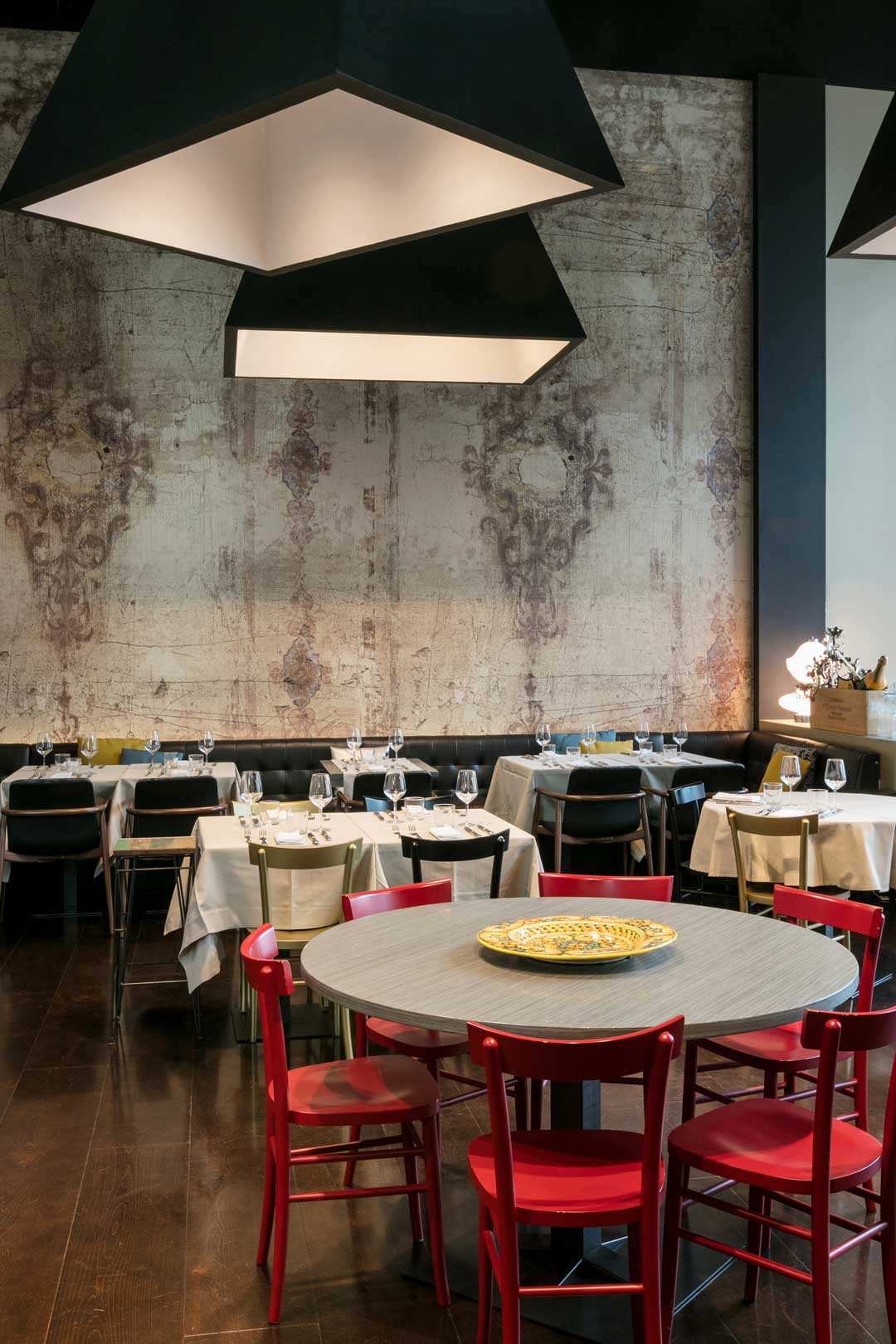 Two characteristics, the mixture of techniques and the union of separate cultures, which are reflected in the gastronomic philosophy of the chef and patron of Il Santa, creating an all-encompassing experience that will involve everything: from the customers’ senses, to the works of art on display, to the food and the architecture of the place itself. A series of concentric waves that will spread all around to celebrate the excellence of a Milan that, in this week as never before, is in the spotlight of the world. 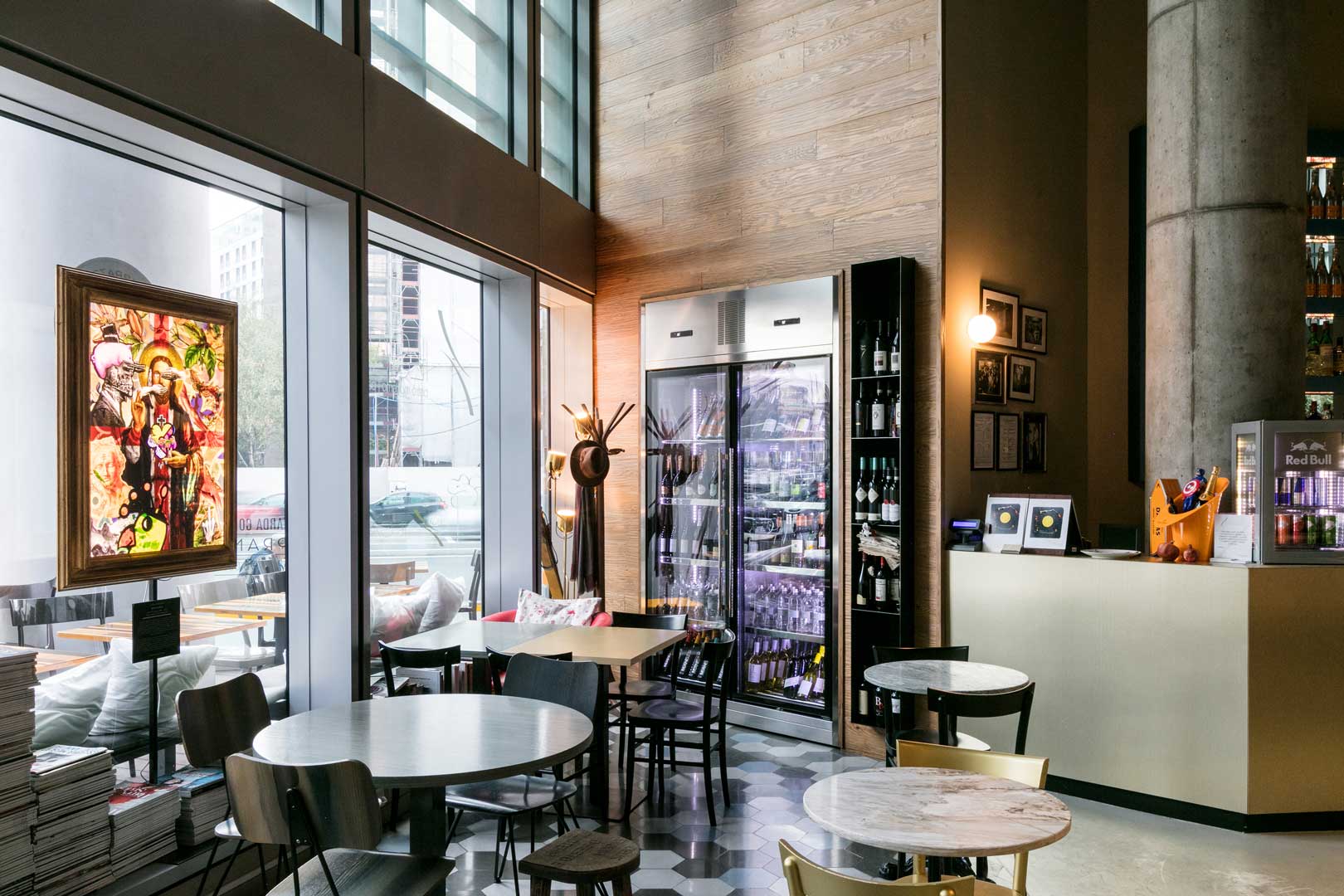 The program will be simple but rich: on Tuesday evening the inaugural vernissage will be held by invitation followed by a gourmet aperitif and dinner. The aperitif and dinner will be repeated every evening, enriched on Thursday by live music and DJ sets, culminating in the weekend with the addition of #joydesign brunch. For dinner, the chef Grandi will offer a tribute menu to the beauty of Milan, with a fixed price of € 35 per person: polenta flour cannoli in a salmon trout mousse and his tartare with sprouts, a yellow Milan risotto with quail egg and cedar peel and finally a mascarpone ice cream with iced-coffee. 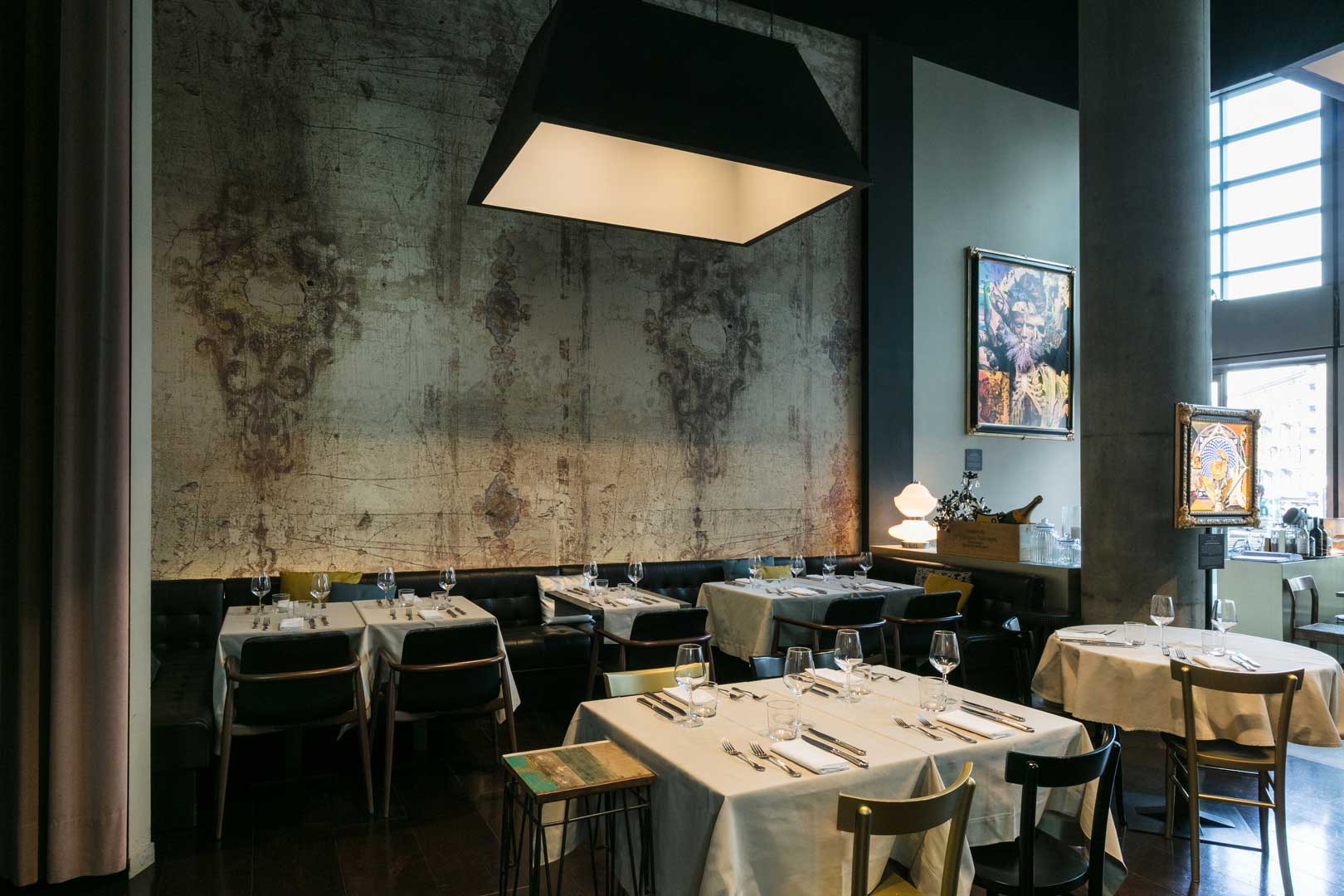 Modernity and tradition, a convergence of close and distant cultures. Everything coexisting in the same space, replicated in every detail, multiplied by the association of these artists of cuisine, design and urban art thanks to the collaboration with Inrete, a company specialized in integrated communication, and which will fill the calendar with a richl and unmissable program of events at the Isola Design District.

Editor’s note: This article is proudly sponsored by Santa Group S.r.l. and promoted by Flawless Milano. Thank you for supporting the sponsors who make Flawless Milano possible.