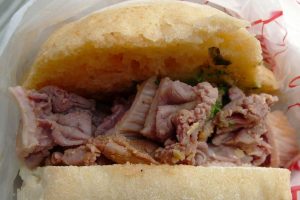 You're never wrong with the Trippaio of San Frediano

The eponymous Simone, who is always in the front row of his kiosk in Piazza de ‘Nerli, with one of his tools at hand, intent on preparing meat, toasting bread and chatting with customers, has found the best possible nickname: the Trippaio di San Frediano. It’s beautiful that the article “The” is used, almost to signify his and his Buticche di’ Lampredotto’s uniqueness. Each Italian region has its own version of street food, and each of these versions is older than the concept of street food itself. This is the case of lampredotto, one of the most typical Florentine products, mentioned even in the chronicles of the fifteenth century. In Florence the lampredotto is something legendary, an almost sacred food, one of the pillars of the Tuscan popular gastronomy.

Simone’s kiosk is located in Oltrarno, near San Frediano. The work is incessant: since early in the morning meat is cut, cooked, grilled at the Kiosk. The culmination is reached during lunch breaks, when the hungry Florentines stop for one of its mythical sandwiches. The sandwiches you’ll find here are all the traditional ones. The one with the lampredotto is obligatory, with many different seasonings. Then the sandwich with Florentine tripe, the one with the tongue, with the cow’s tea and then the more traditional ones with the hamburger, the sausage and even hot dogs. If you’re not looking for a sandwhich, don’t miss the traditional first and second courses based on lampredotto and cold dishes of offal.

The kiosk also has a covered area that guarantees its activity even in the rainy days. The mood that you will find beyond the edges of its tent is the classic Florentine one: always cheerful, always salacious and with a hint of humor that is almost more tasty than the sandwiches it serves. Already from the name of the kiosk, which jokingly deforms an abused term as “boutique”, one understands all the cheerful spirit that dominates those few square meters in Piazza de ‘Nerli.

If you are around the beautiful corners of San Frediano to breathe the air of the real, everyday Florence, you can’t miss a quick lunch at the Buticche di ‘Lampredotto di Simone. You will not regret it!