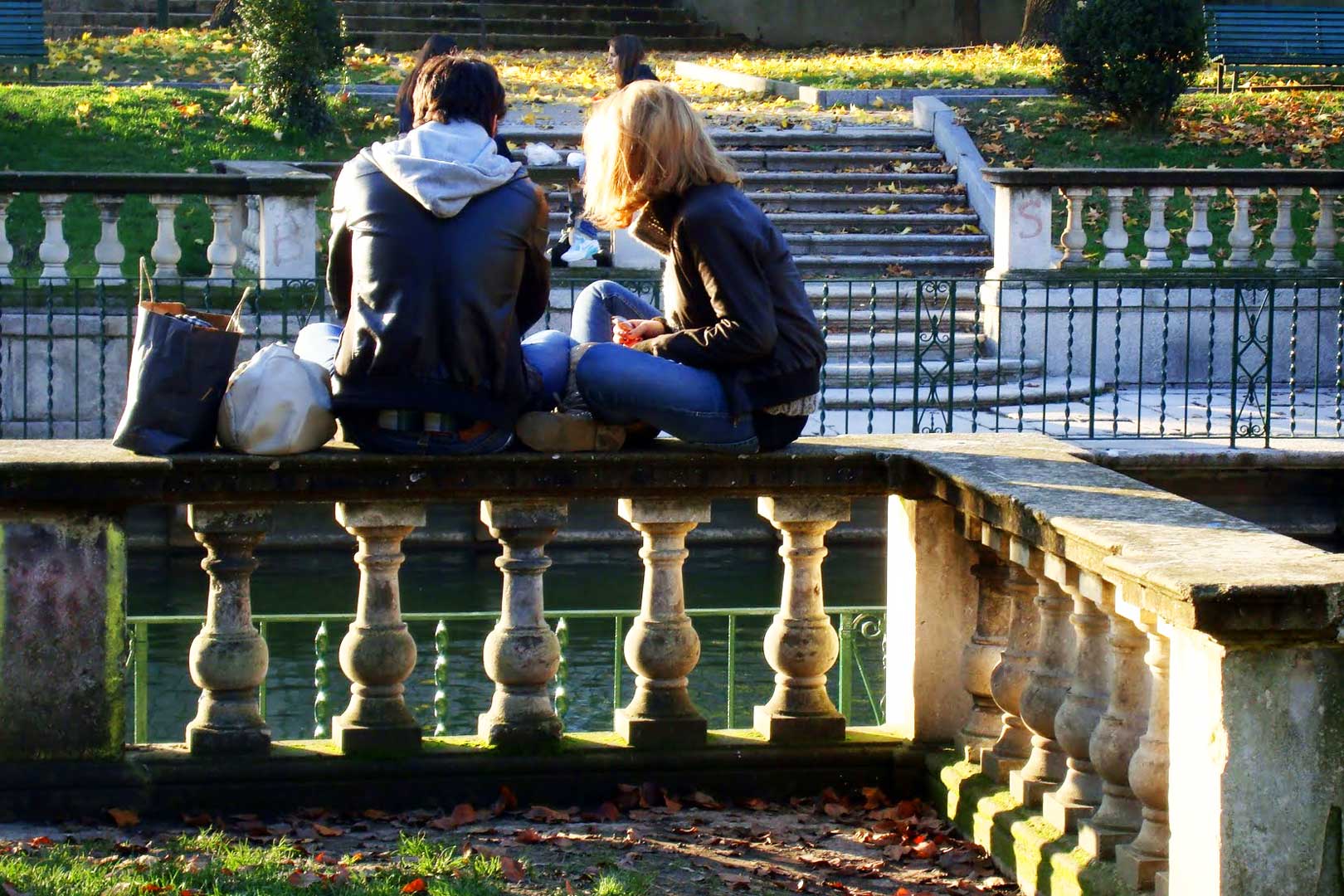 10 of the city's most romantic spots for you, along with a few anecdotes to impress your sweetheart

A beautiful song from way back says it like this: “If only you knew how strange it is to fall in love in Milan.” Not so strange, after all, if you consider that this city, along with its hectic pace, boasts canals like Venice and cathedrals like Paris. I’ve picked 10 of the city’s most romantic spots for you, along with a few anecdotes to impress your sweetheart.

1) The Terraces of the Duomo (Milan Cathedral) 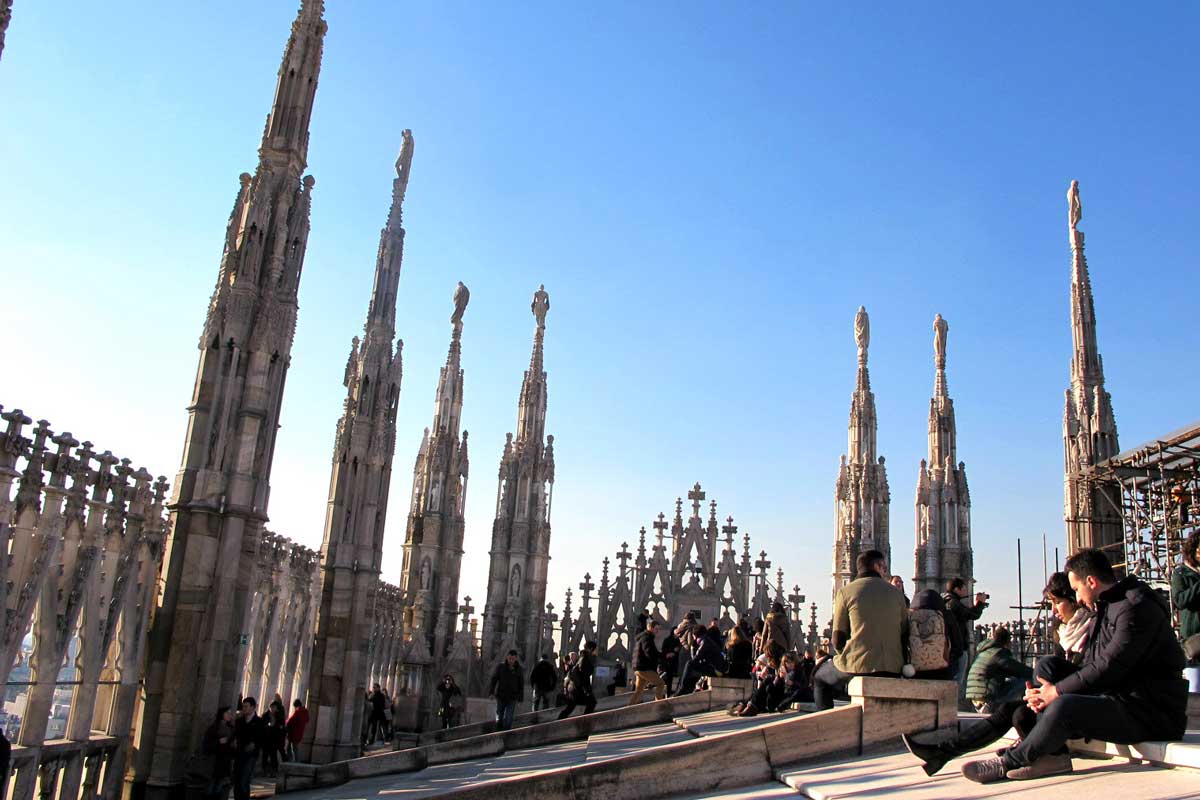 If you want to take your sweetheart somewhere that looks a little like the top of the world (or at least the top of Milan), then this is certainly one of the most picturesque and characteristic spots. From its altitude of 70 meters, the Duomo offers an unmatched view, framed by the majesty of its 135 spires. The Terraces cover 8,000 square meters, completely visible as you stroll through broad spaces and corridors. You can get there by stairs or by elevator, with the last entry around sunset. Idyllic. 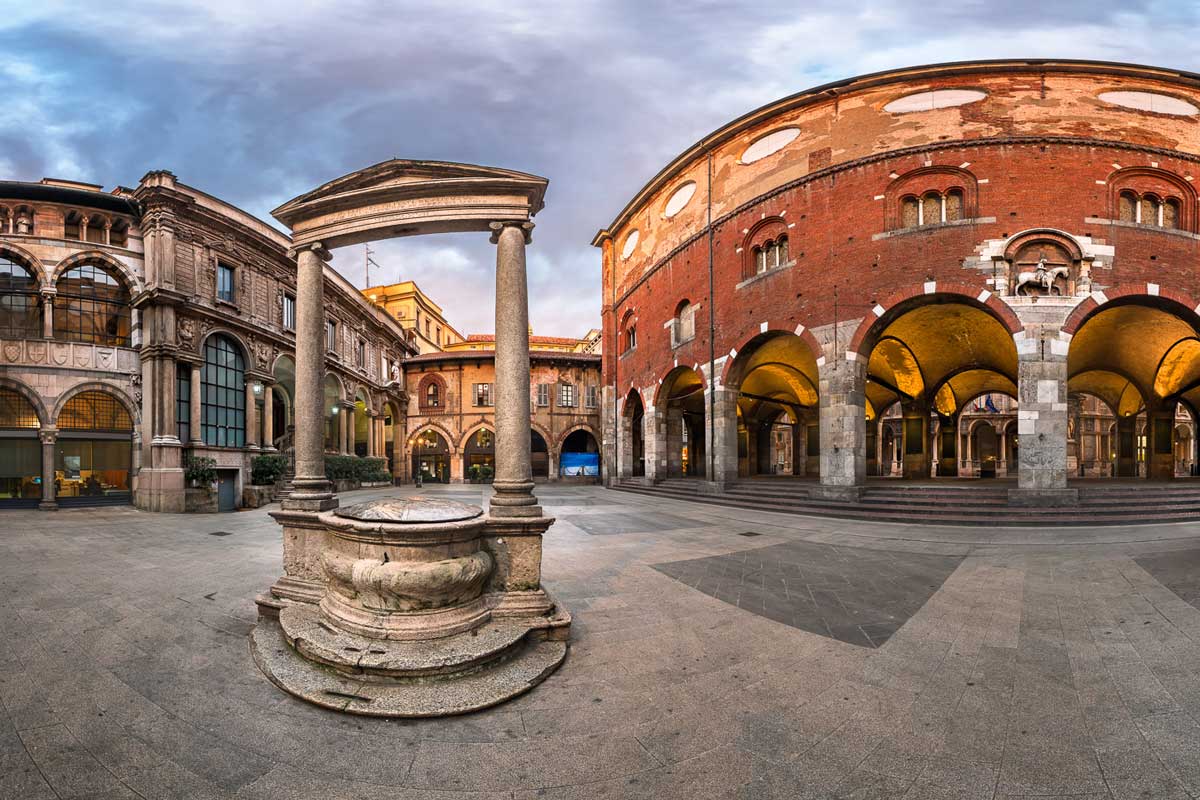 In the exact center of the city you can catch a glimpse of the Middle Ages in a spot worthy of Romeo and Juliet, certainly one of the most romantic spots in the city. This piazza, with its rectangular layout, originated toward the middle of the 12th century. At that time the various arts and crafts guilds were born and grew, and the adjacent streets still bear their names: Armorari (armourers), Spadari (swordsmiths), Cappellari (hatmakers), Orefici (goldsmiths), Speronari (spur makers), Fustagnari (moleskin artisans). Four palaces mark the boundaries of the piazza: The Palazzo della Ragione, the Loggia degli Osii, the Scuole Palatine and the Casa della Panigarola. A beautiful pit occupies the center of the square. The piazza quickly became the hub of Milanese life and the beating heart of the city’s progress. The portico’s arches are characterized by a particular acoustic phenomenon: stand in the corner of the loggia and speak facing the columns. You’ll discover that the person standing in the opposite angle can clearly hear every word you say. It seems this was how the merchants exchanged information. If you’re shy and can’t find the courage to tell your sweetheart exactly how you feel, this is the perfect spot!

3) The narrowest street in the city

It’s not easy to find – hidden in the heart of the city, between Via Santa Marta and Via Nerino there’s a minuscule alley, short and narrow, that to all effects is really the narrowest in the whole city, called via Bagnera. It was actually known as “Stretta” (Narrow), while the name Bagnera was derived from the public baths that were located there during Roman times. The alley is also infamous for having been the scene of murders carried out by the city’s first serial killer – The Monster of Milan – back in the mid-1800s. A tight alleyway and a few shivers down your spine: the perfect recipe for stealing a furtive kiss from your sweetheart!

4) The Navigli (canals) and the Vicolo dei Lavandai 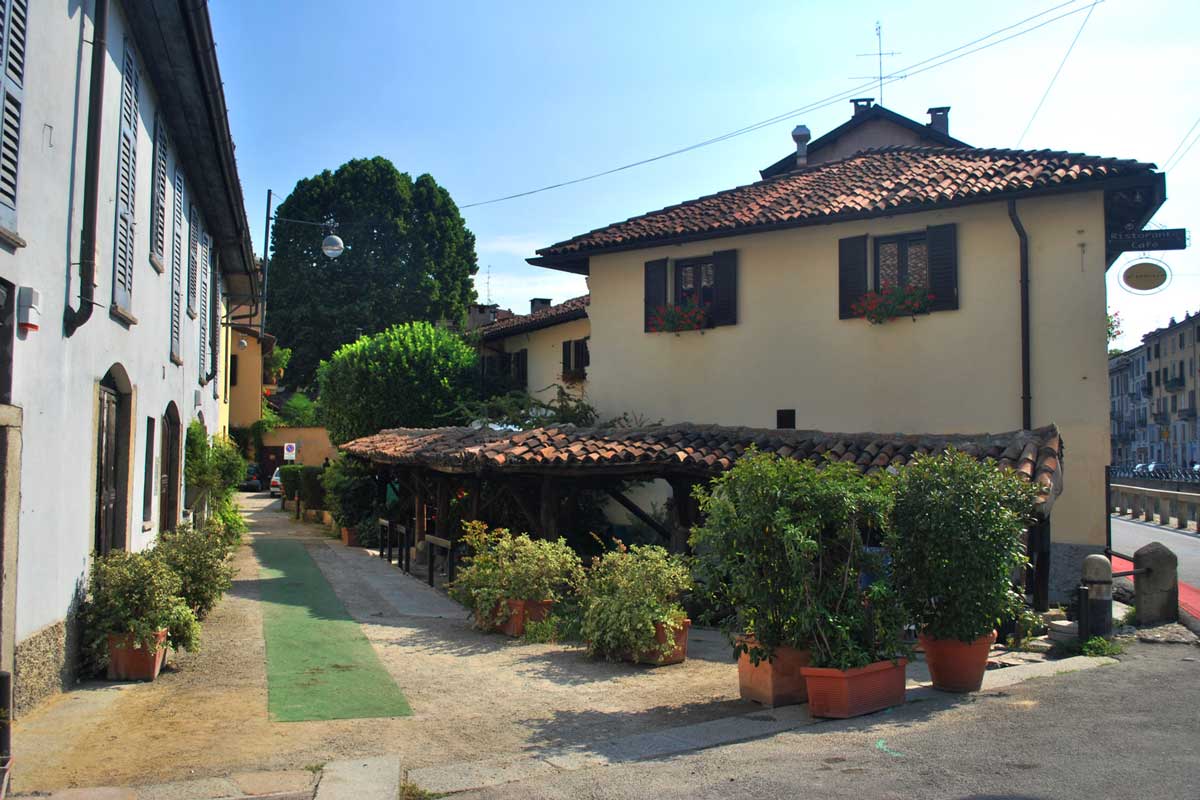 What could be better than a stroll along the Navigli, one of the most distinctive places in the city? Go on a beautiful sunny day, or a foggy, hazy day, or even at night when it’s all lit up, and pause in the vicolo dei Lavandai to declare your never-ending love to your guy/girl. This alley has become a national monument and here you still find antique washtubs covered by a wooden structure. Washermen (yes, you read that correctly, washerMEN, not women) used to wash clothes by scrubbing them on a “brellin” – a wooden crate with a handle – from which the restaurant on the corner takes it name. Once upon a time it was the grocery store that supplied the washermen with hot water and soap. Like I said, in the 1800s men took care of the laundry service, and they even organized a proper association or guild – the brotherhood of washermen dates back to 1700. St. Anthony of Padua is their patron saint and an alter of the church of Santa Maria delle Grazie of Naviglio, 100 meters further down the way, is dedicated to him. Among other things, St. Anthony is also the saint you turn to in order to find a good husband, which lends an extra touch of romanticism. Since we’re already on the subject, why not take the opportunity to investigate your future spousal candidate’s domesticity with the art of doing laundry?

5) The columns of San Lorenzo 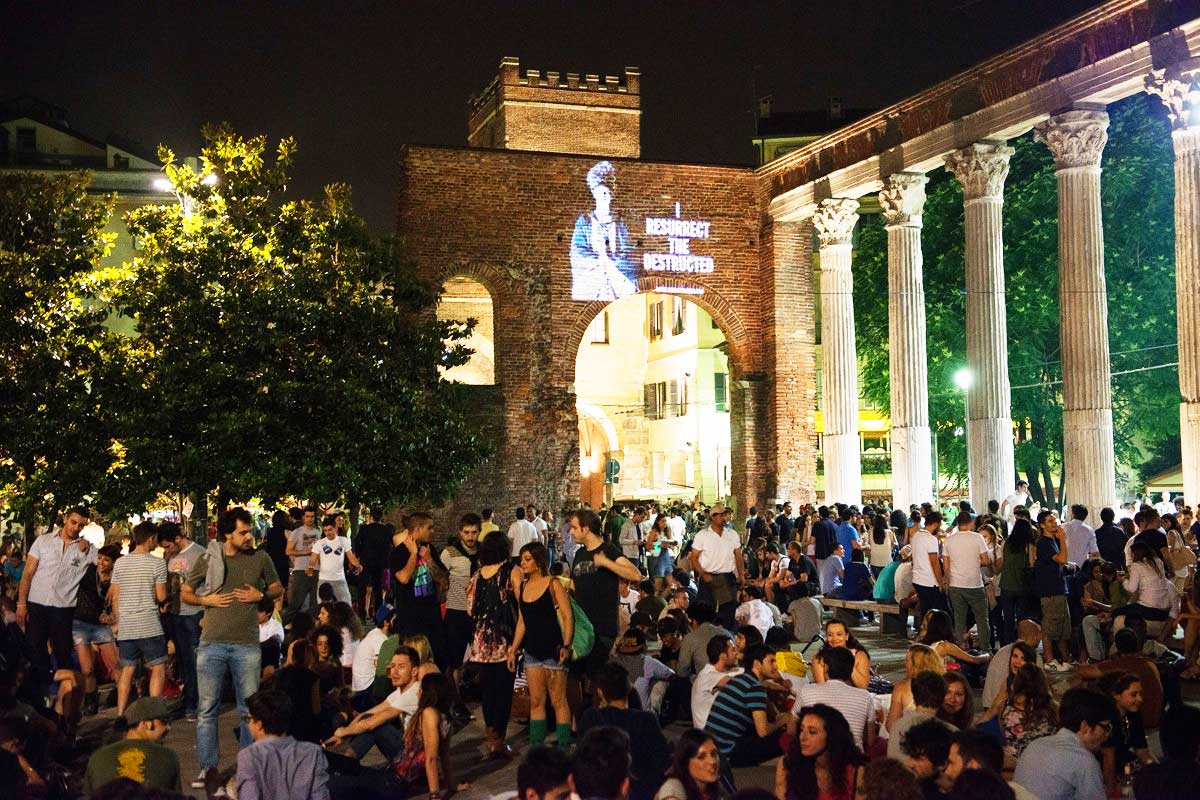 I couldn’t leave out this majestic and distinctive monument, a true institution of the city. The 16 Roman columns of San Lorenzo are found between corso di Porta Ticinese and via Torino. They date back to between the second and third centuries AD, are eight and a half meters tall, and crowned with Corinthian capitals. An evocative path, perfect for strolling or lingering, and for getting lost in conversation. 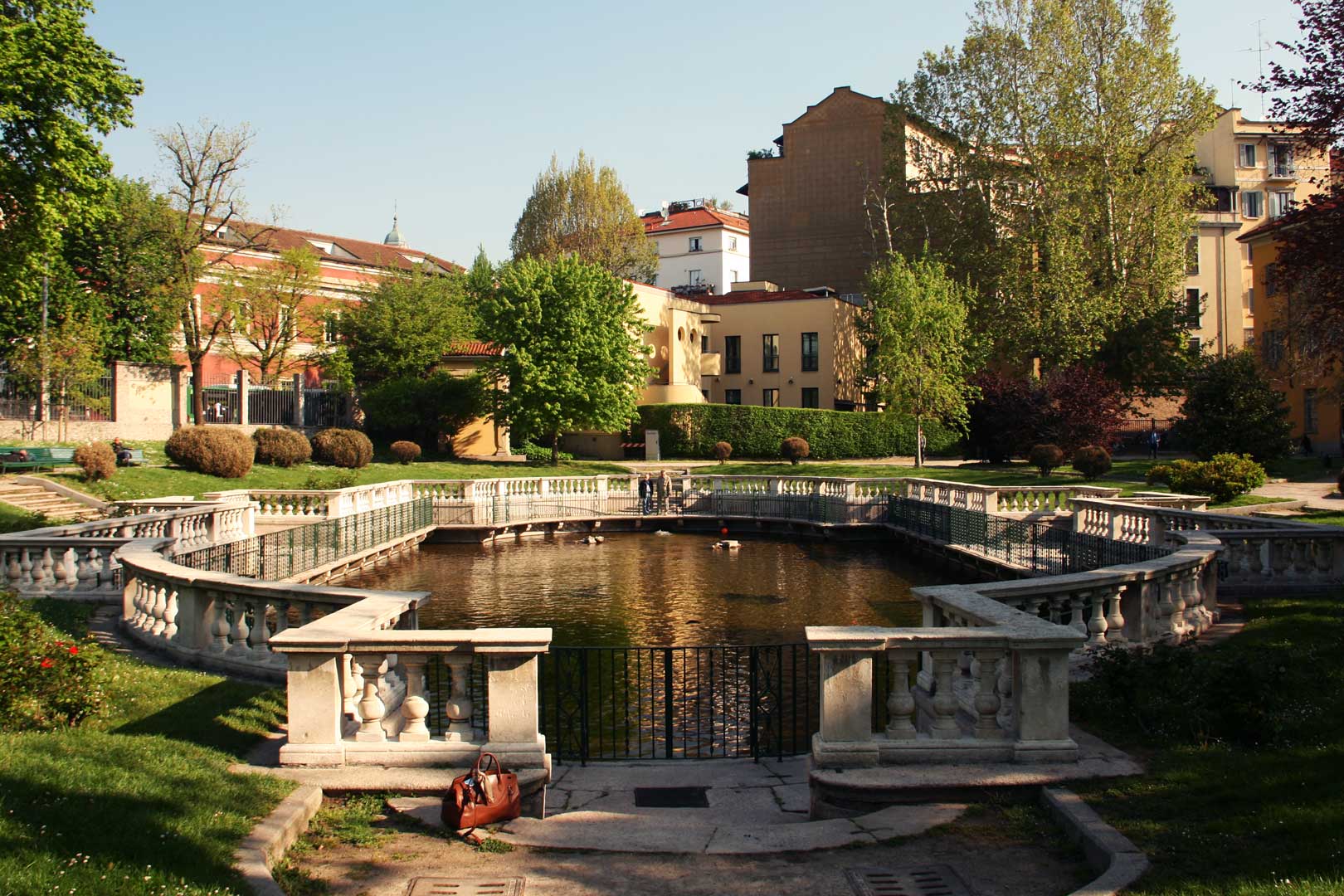 Giardino delle Vergini (Garden of the Virgins): Largo A. Gemelli, 1

Take his/her hand and lose yourselves in a stroll through a municipal park, admiring ancient trees and taking a break on one of the benches. In the Gardens of Guastalla (Parco della Guastalla) you can throw an impromptu romantic picnic on a table in the shade of a beech tree, or pause to look at the fish pond. In the Gardens (Giardini) of Porta Venezia, you can get lost along the long paths, admire the pond, or dream about a future wedding day at the Palazzo Dugnani (civil weddings take place in the glorious Tiepolo hall). At Sempione Park you can bring your prince or princess to the shade of a real castle (Sforzesco) and ask for a bit of good luck from the “Ghisini Sisters” (The Bridge of Mermaids). Or, at the Botanical Garden (Orto Botanico), you could whisper sweet nothings to your sweetheart in total privacy. Girls, are you totally fed up with men and want nothing more to do with them? Perfect! In the Garden of the Virgins of the Catholic University (Giardino delle Vergini dell’Università Cattolica) men of every size and shape are forbidden to enter! 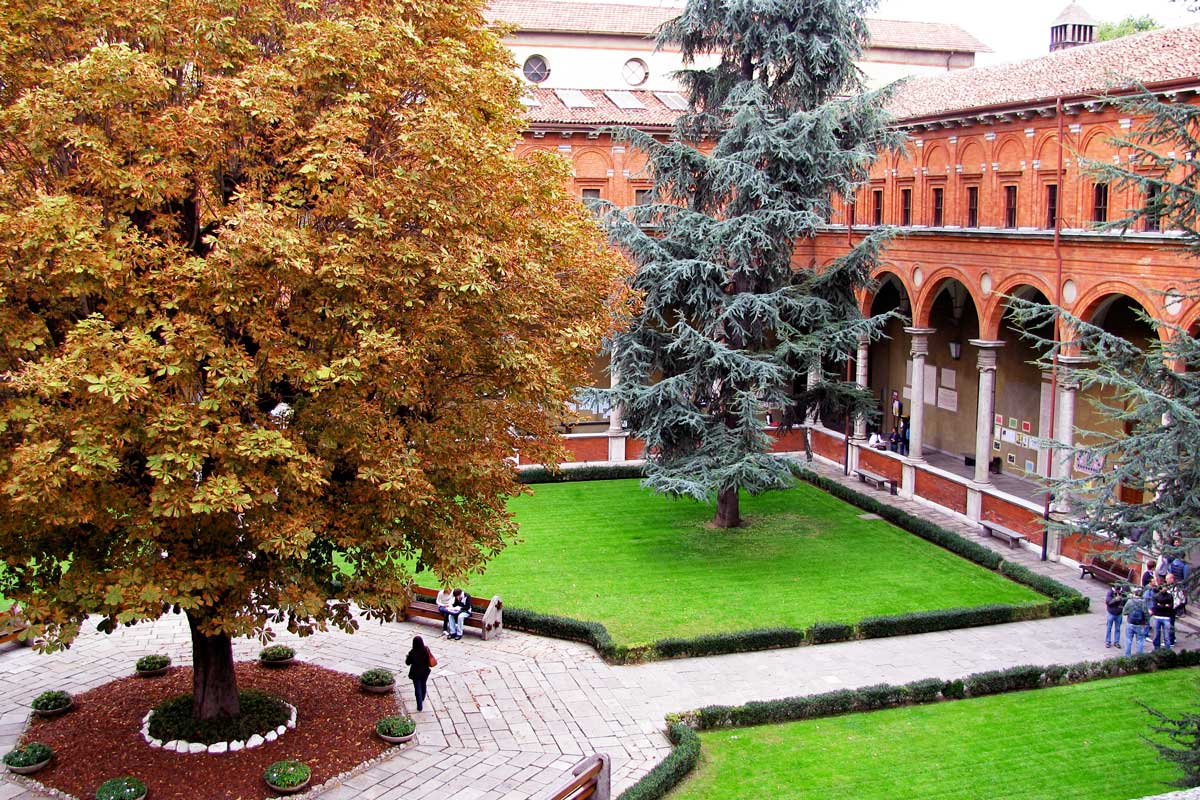 The universities are among the most fascinating spots in the city, where everything moves fast among furtive glances. Take some time to stop and chat in the courtyard of the University of Milan. This building originated in 1400, by order of Francesco Sforza, who wanted to build a great hospital that would demonstrate his generous nature to his subjects. To build this grand project, he commissioned Antonio Averlino, popularly known as “Il Filarete” (who also worked on portions of Sforzesco Castle). The project was impressive, a city inside a city, equipped with a mill, an oven for baking bread, shops for barbers, carpenters, and shoemakers. That’s why the immense building was renamed “Ca’ Granda” (Big House). The structure is composed of a large rectangle divided into two squares by a central courtyard. Each of the two squares is further subdivided by a cross into four shorter courtyards. The hospital is currently occupied by the humanities faculties of the University of Milan. Don’t miss the opportunity to take a look at the cross wing, where back in the day patients were treated. Along the walls you can still see the cubbyholes where the patients stowed their personal effects. Or else wander through the splendid Cloisters- Bramante’s work – of the Catholic University. The building was a former monastery of St. Ambrose, and later also a military hospital. 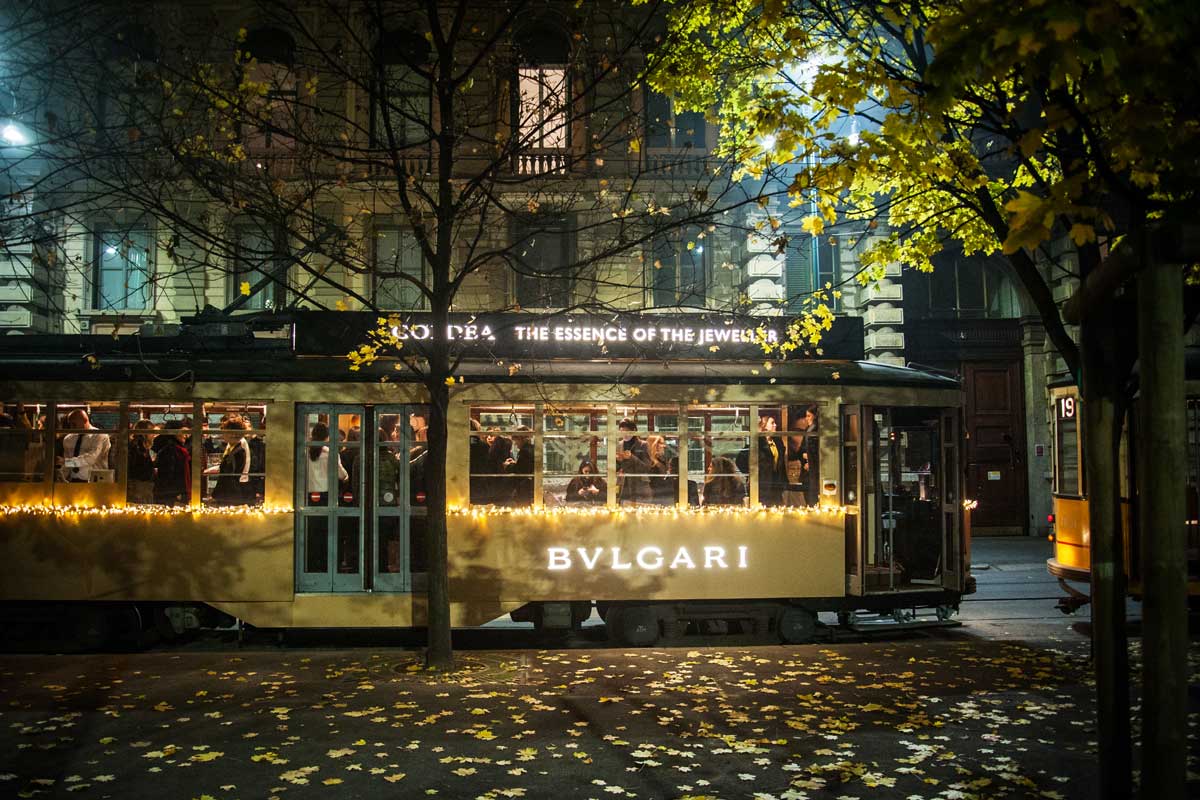 You can’t imagine Milan without picturing its characteristic and distinctive mode of transit: the tram. A bit out-of-date with its old-fashioned profile, a bit antithetical with its slow pace and its progress at the mercy of traffic, but without a doubt, 100 percent romantic! When you live in Milan, you learn to recognize the sounds: of the tram lurching forward, of it braking, of the folding doors when they open, of the footboard when it lowers. On board, everything is frozen in a bygone century: wooden interiors and benches where you sit sideways instead of facing traffic. We’re talking about the oldest model, usually orange (in some cases, yellow), born in 1928 and known as the “1500.” This mode of transit allows you to take a true romantic cruise of the city, admiring the splendid views from the Navigli to the Madonnina. If you’re lucky (the wait list is incredible), you could even organize a candlelight dinner on the ATMosfera restaurant tram.

Via Brera, Via Fiori Chiari

Lose yourselves in one of the most distinctive neighborhoods of the city, among tiny streets with poetic names and mini piazzas that seem to appear out of nowhere. All framed by tiny candlelit restaurants with intimate little tables. Bring your sweetheart and gaze at the stars at the Brera Astronomical Observatory. Or perhaps, if you just can’t wait to find out how it’s all going to turn out, get your palm read by one of the many fortune tellers in via Fiori Chiari… who knows! 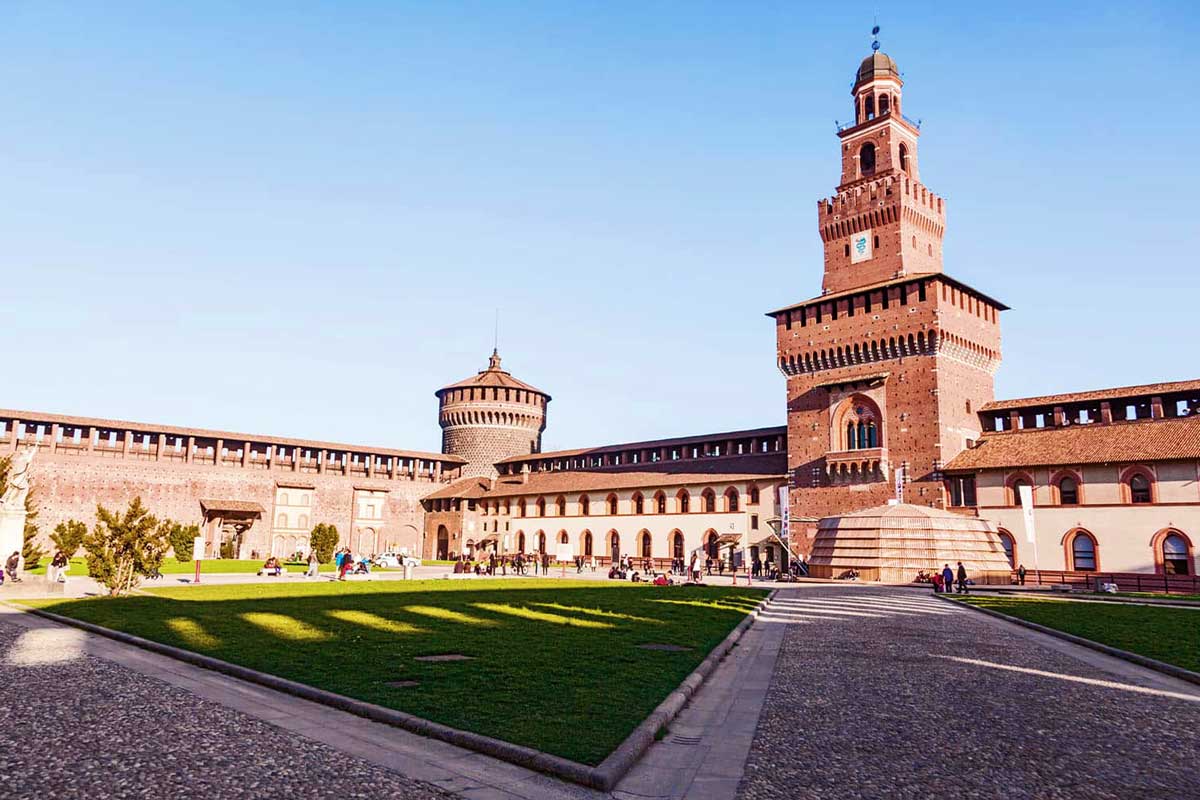 If your guy is without a doubt Prince Charming, or your girl is your one and only Princess, then treat him or her to a visit to a real castle. Castello Sforzesco was built by the Visconti in 1447, and in all its glory became the prestigious center of the city’s social life, an expression of pomp, a meeting place for artists, scientists, and inventors, including Leonardo da Vinci. In the years to come, it became the target of a series of Spanish and Austrian invaders attempting to conquer the city. The latter group reduced the castle to such a pitiful state that weather and neglect practically left it in ruins, so much so that the possibility of razing it to the ground was considered. Now it’s an important museum venue and a rare example of a metropolitan castle.