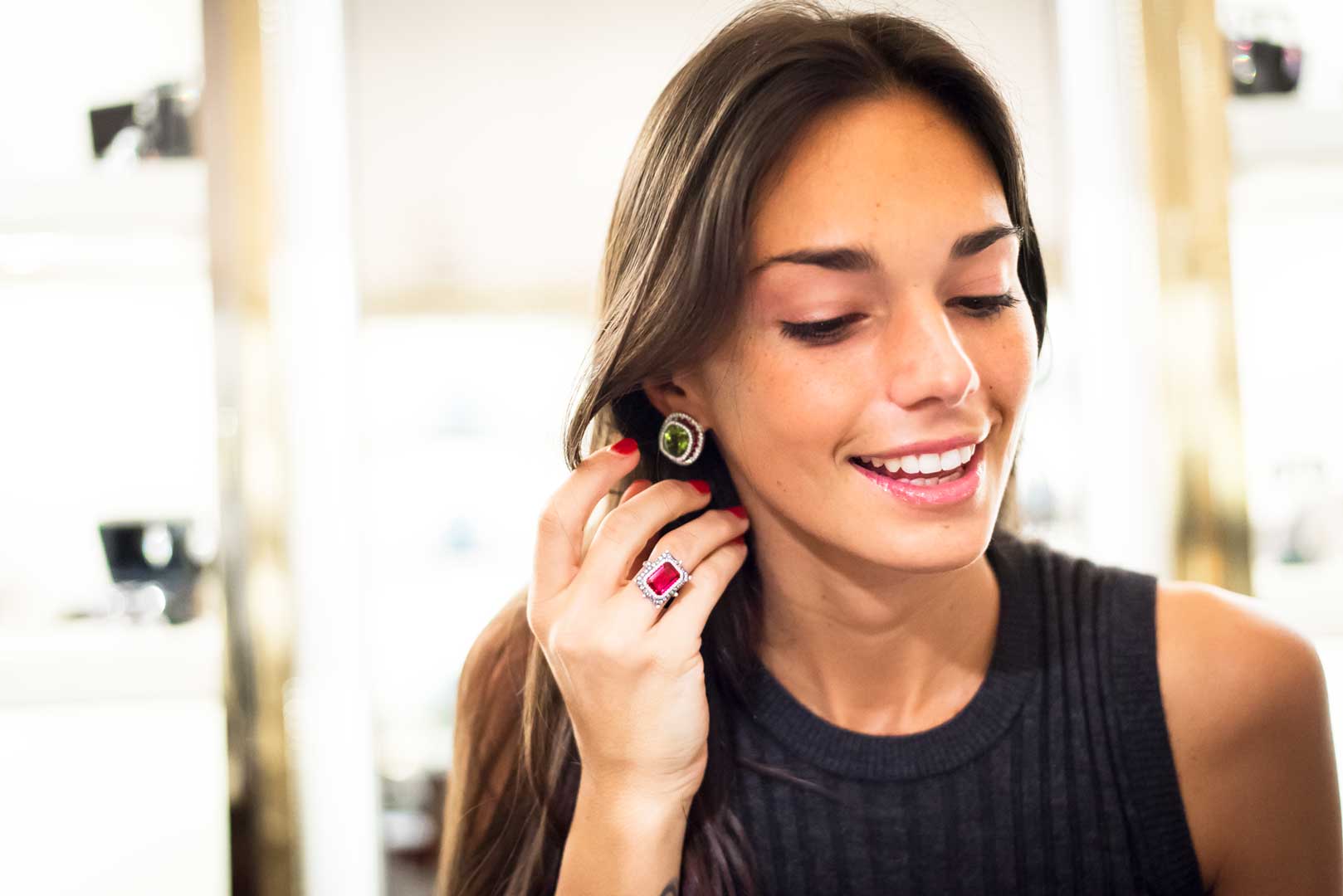 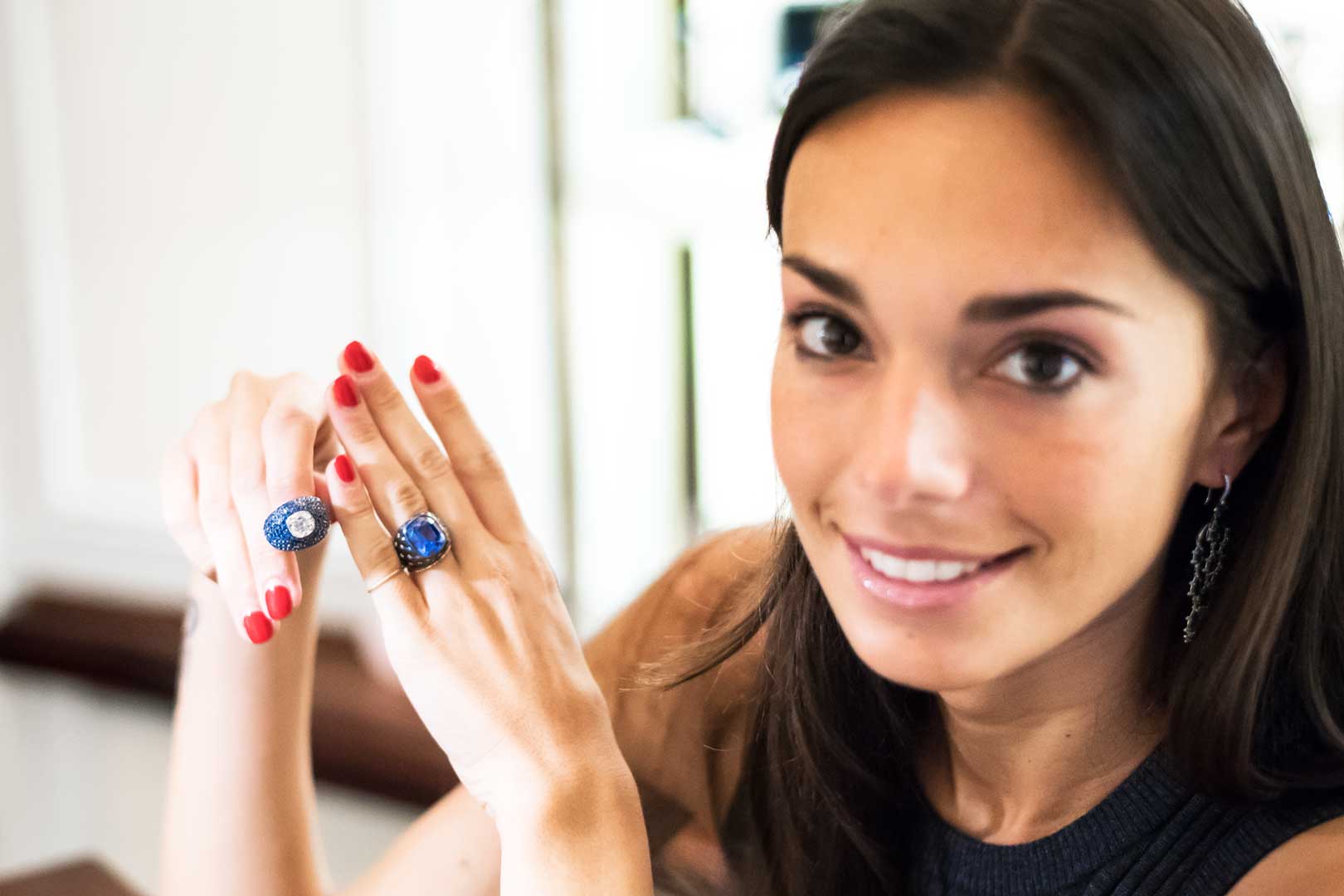 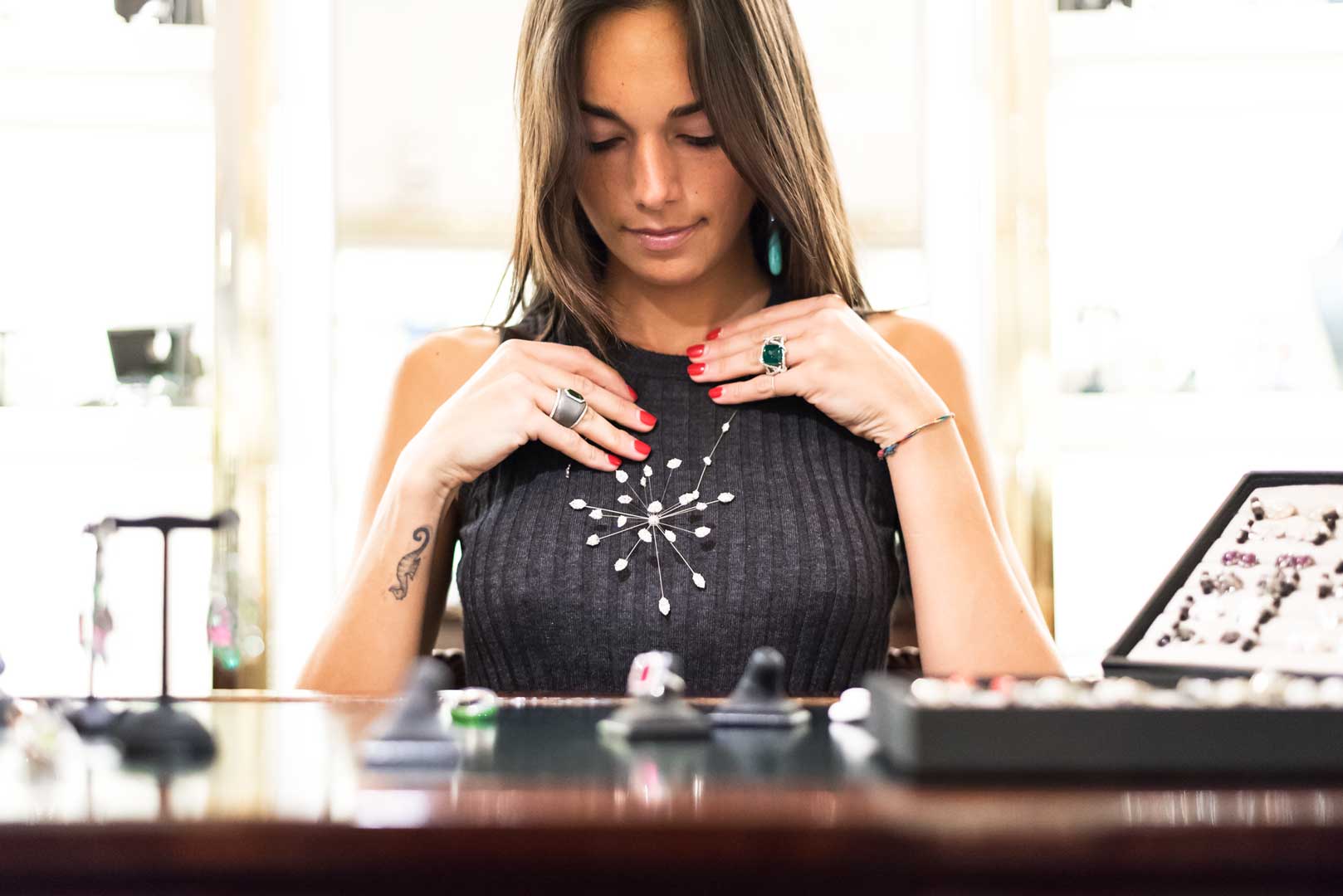 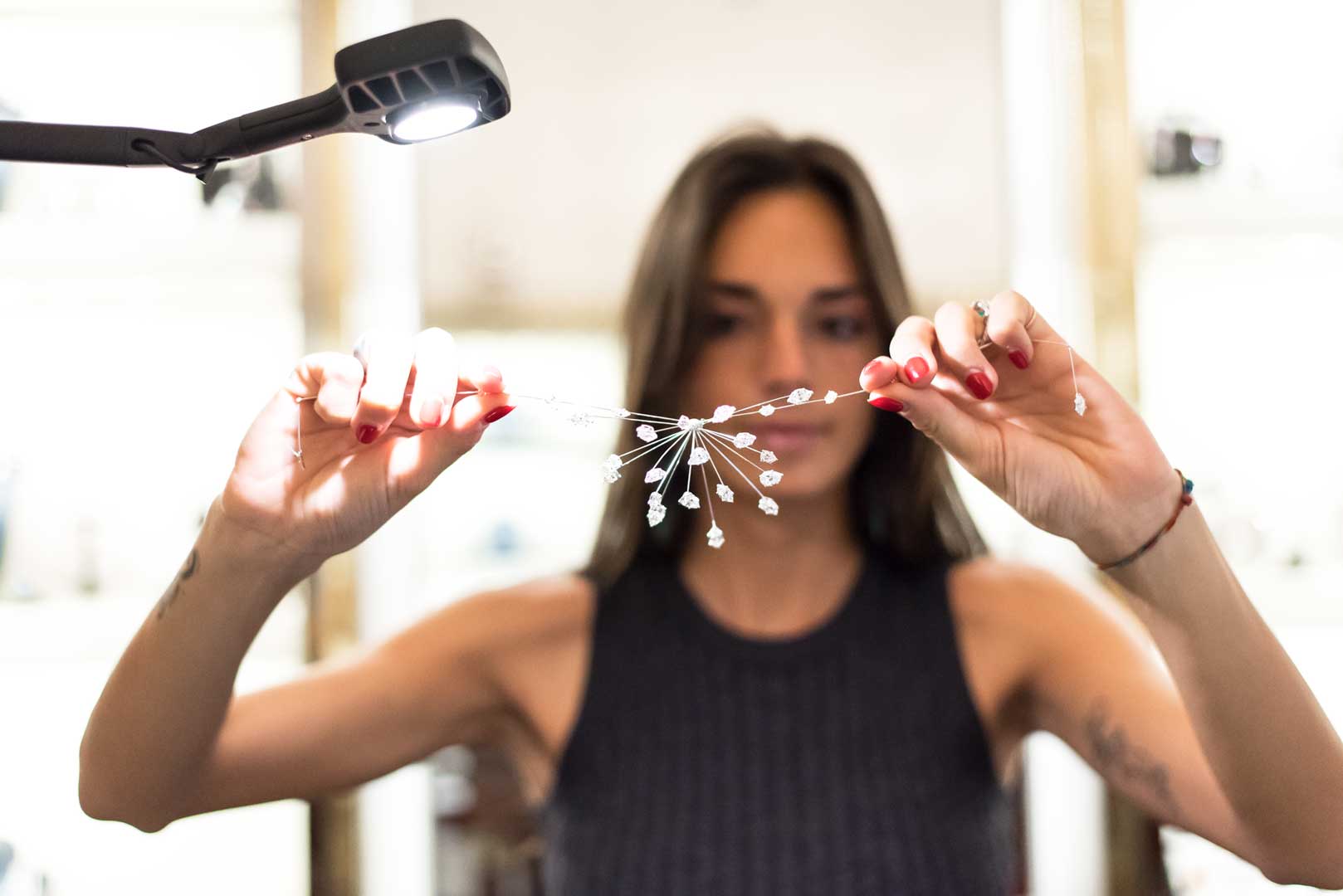 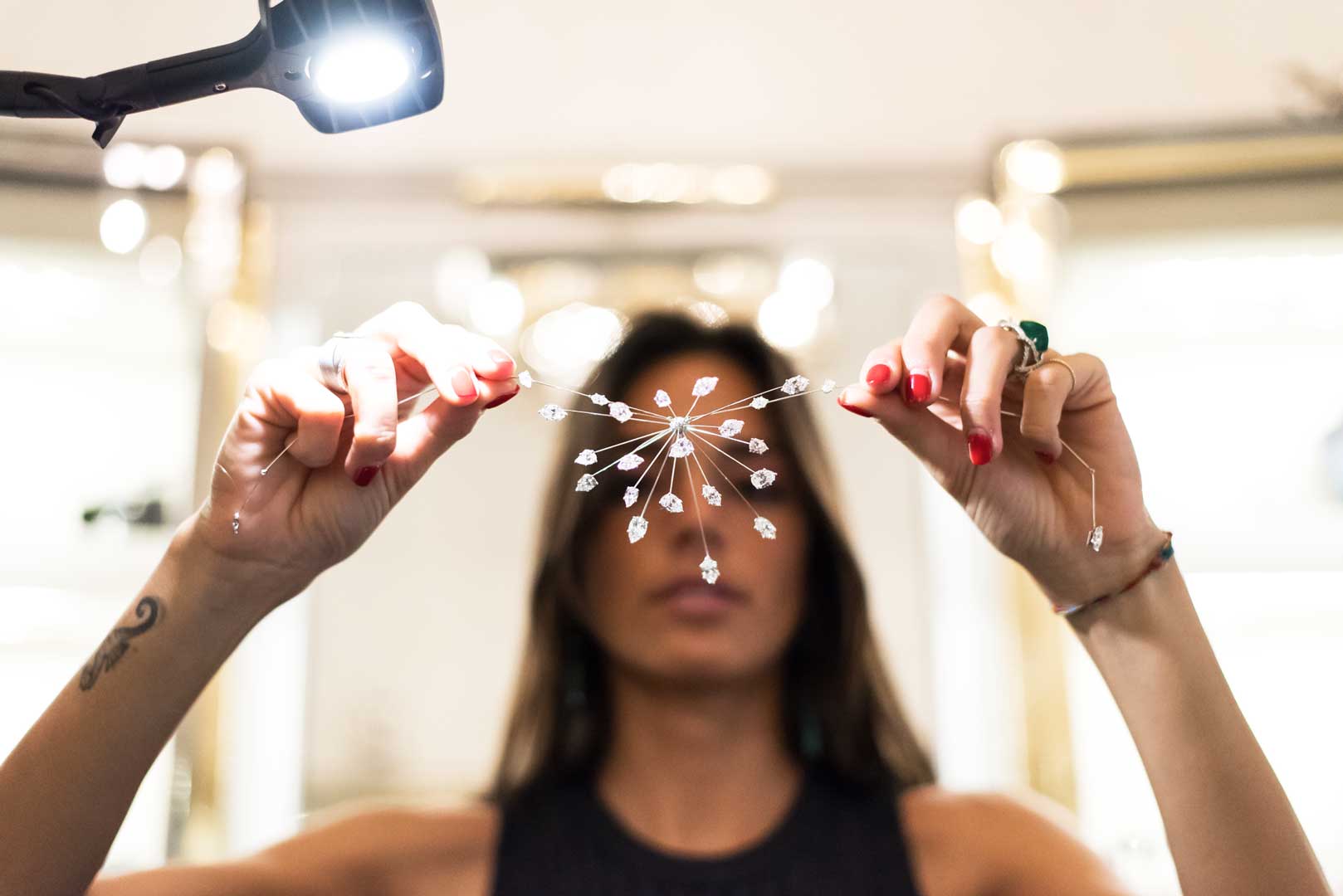 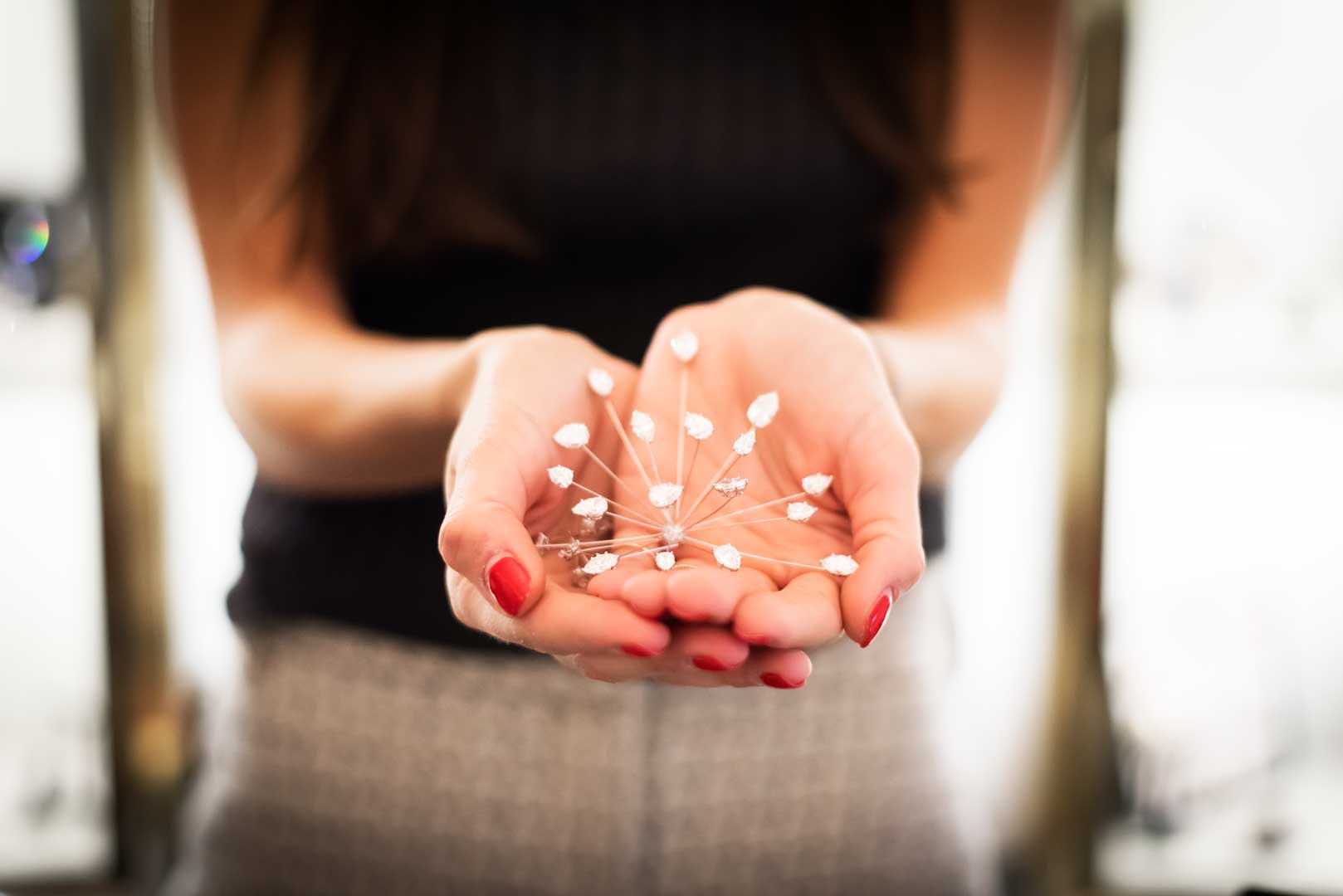 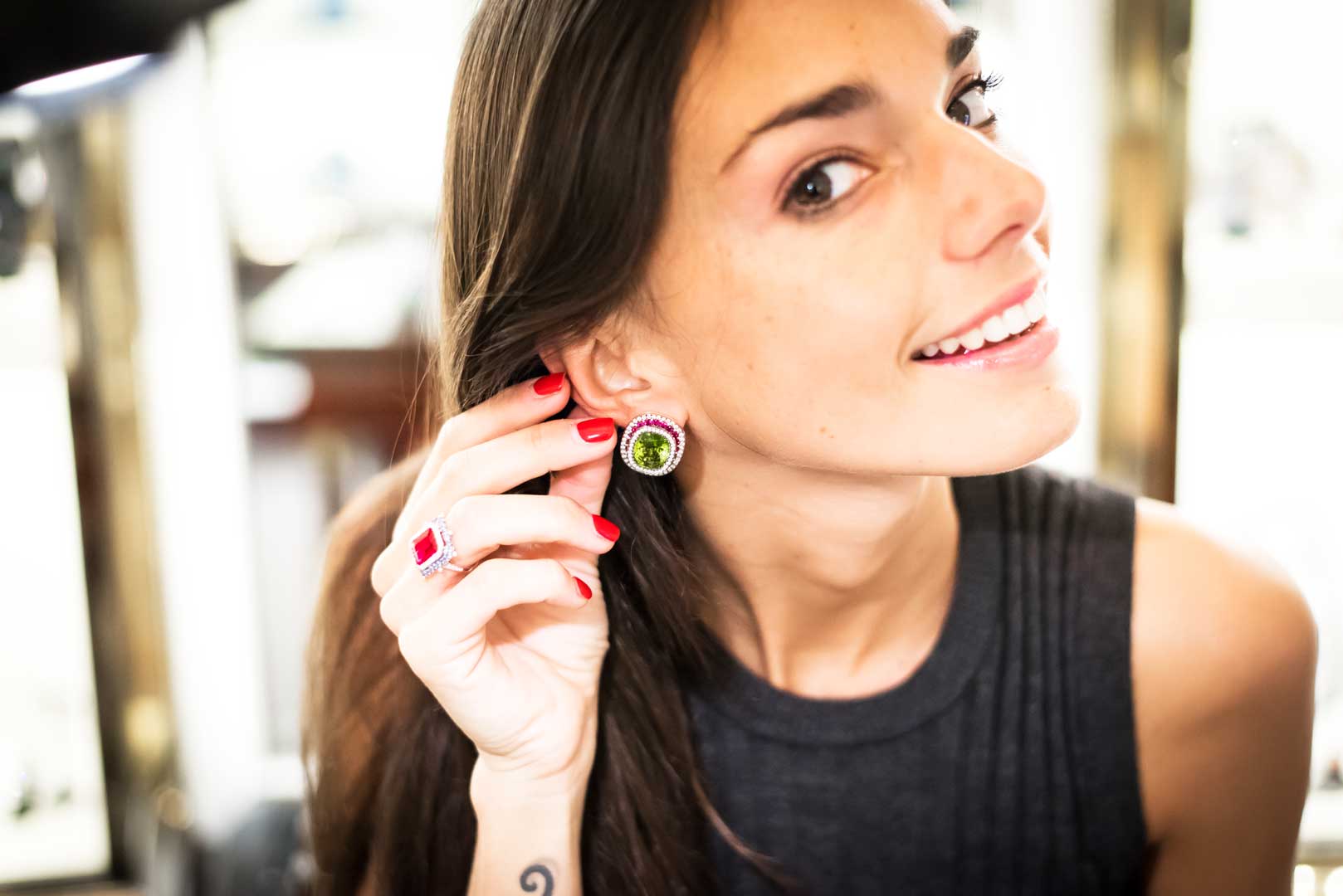 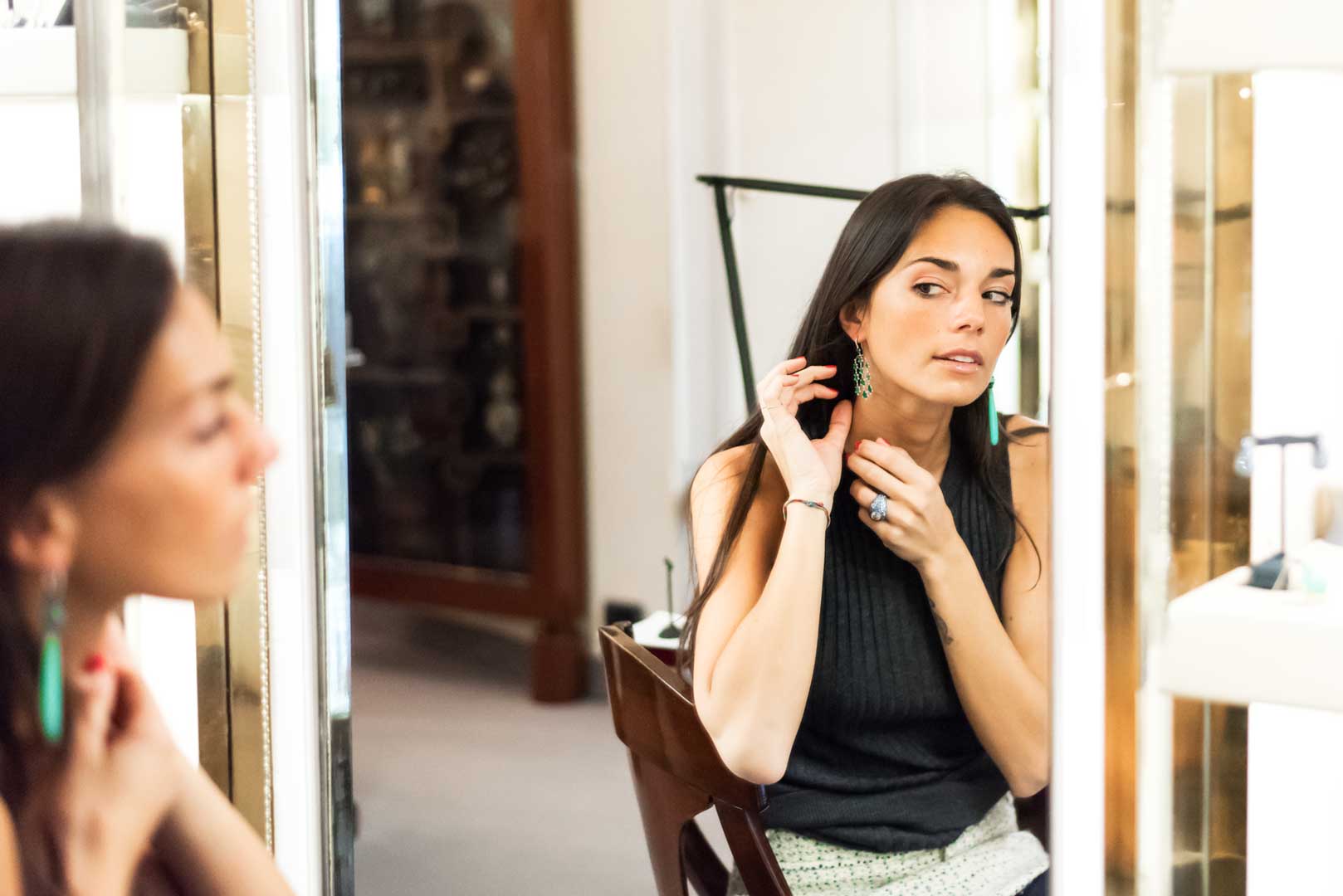 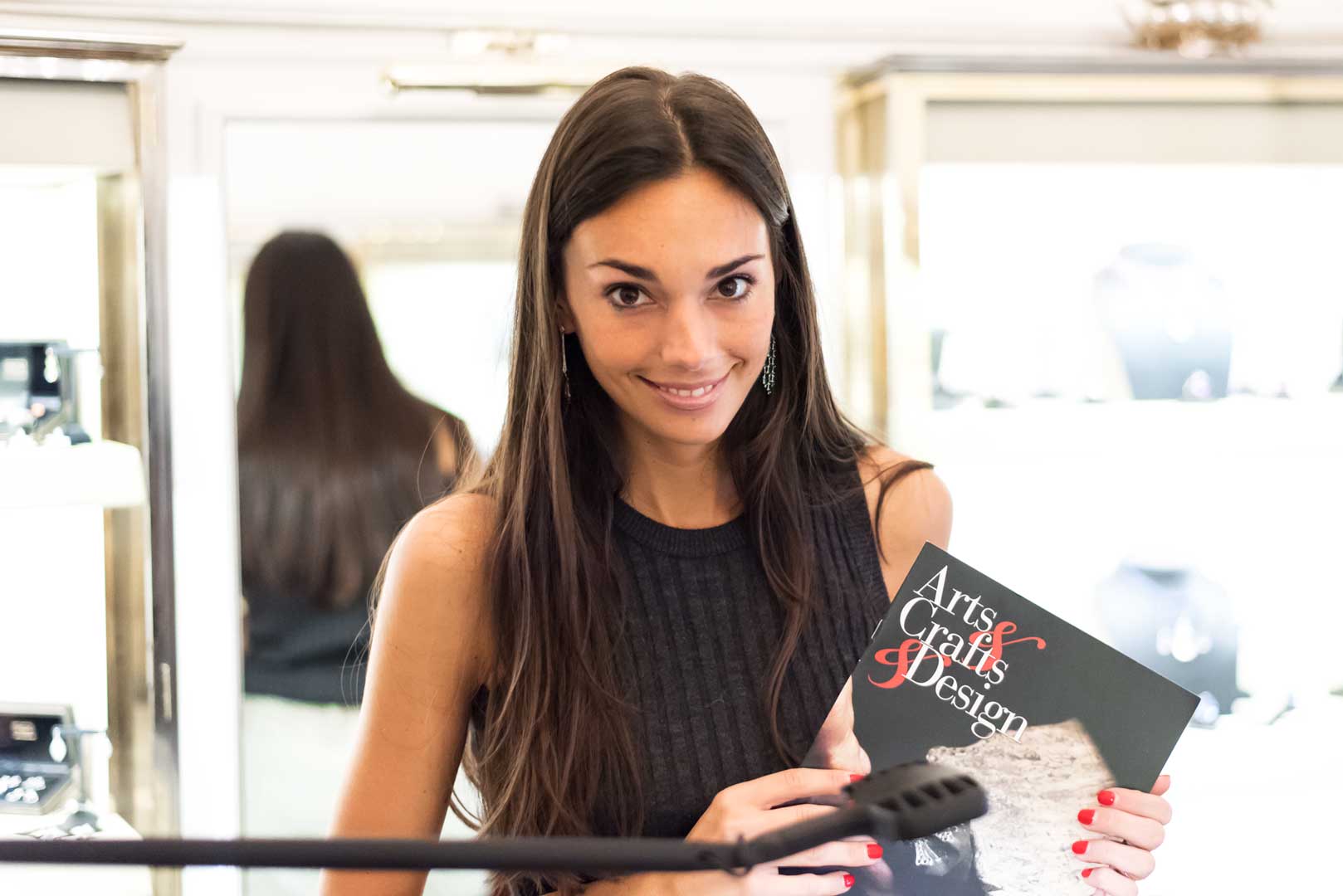 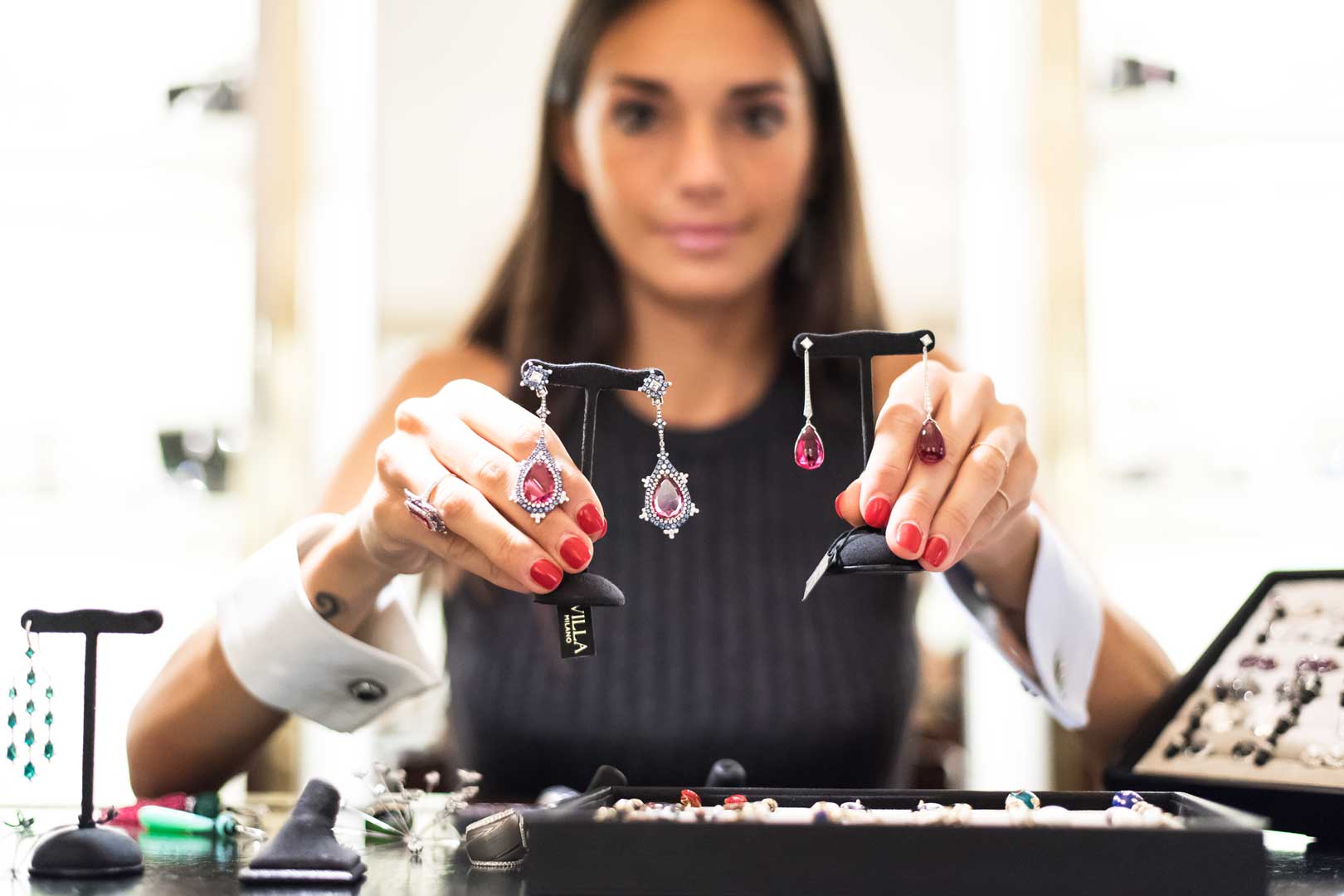 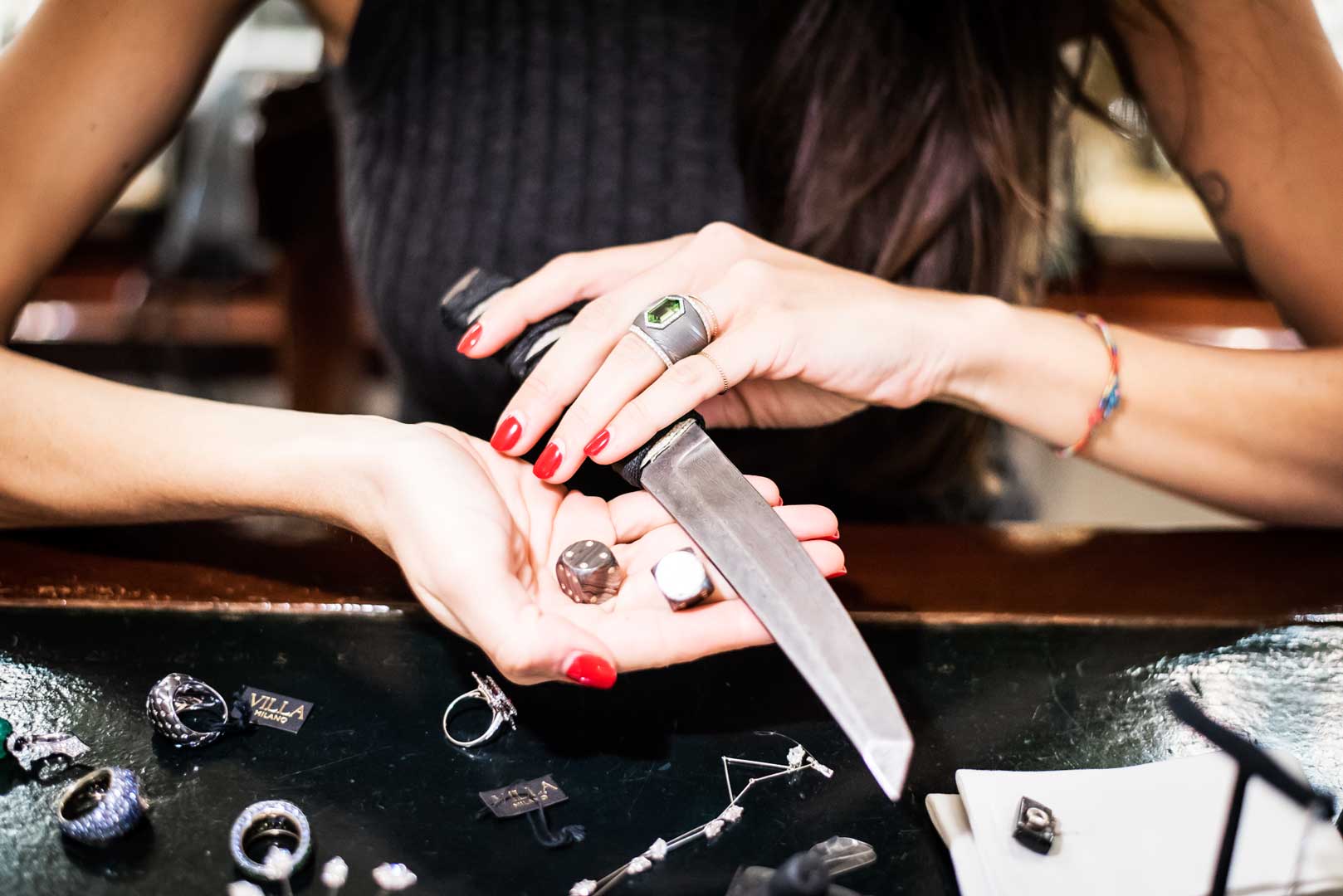 The Heritage of Francesca Villa

Francesca represents the fifth generation of the Villa jewellers, the century-old tradition started by her great-great-grandfather

Francesca Villa, after completing her classical studies and a Degree in Modern Literature at the Catholic University, attended the Master in Social and Political Public Communication at IULM, so that she could then take her first steps in the world of communication in the fashion department of the Milanese press office Studio Re Public Relations. In 2012 she decided to follow her family’s tradition and become a part of the company of her dad Marco, who was the owner, along with his brother Filippo, of the historic jewellers Villa. Aged only 25, after the death of her father, which occurred in March 2014, she took her place alongside her uncle, becoming a partner of the firm together with her sister Alice (who currently does not work in the store, but still participates in all strategic decisions). Today, Francesca represents the fifth generation of the Villa jewellers, and continues with enthusiasm and a spirit of innovation the century-old tradition started by her great-great-grandfather.

She welcomes us smiling, in her shop, which is a real corner in the history of Milan, located in the central via Manzoni, headquarters of the family business and her second home, or, as she likes to call it, “a little jewel to be guarded with care”. And such a precious place it is, where one can admire unique pieces and stones with fascinating histories.

Hello Francesca, first of all thank you very much for agreeing to carry out this interview and we compliment you on your wonderful work. We are keen to be able to ask some personal questions and to know your views on our beloved city.

If you had to talk about your work in a sentence or in a few words, which would you choose?
The stones excite. When I sell a jewel, a unique piece of the store created by the hands of our goldsmiths and setters, I separate myself from it forever. I love to see the joy in the eyes of those who take it away, they should get excited, fall in love and want it with passion. It is only then that I am satisfied.

What do you think is the biggest challenge of your job?
To live up to my father and my uncle, the fourth generation of the family tradition.

You represent the fifth Villa generation. What are the main innovations you have brought about in these years? How do you see the jewellery and how do you see yourself in 10 years?
I was involved in designing our website. I wanted to renew the old one and turn it into an e-commerce. I enrolled in the course of gemology in June. Ten years is too long, I’m not ashamed to say that I more or less take my life one day at a time.

The jewels are a family thing for you: what was it like to be part of a real tradition?
It was a risky choice at the time, I dare say, and now it’s a path which I walk along with the greatest of enthusiasm. This means that it was the right choice!

Flawless Milano is a lifestyle guide about Milan: how do you put jewellery in the context of the city? Who are the most loyal customers and who are the ones you love speaking to the most?
Our historical customers for generations: first the parents, now the children, in the future, the grandchildren.

What do you love and hate most about your job?
I love selling. The gratification I get when a customer comes up with a gem which they like gives me a great satisfaction. I hate the bureaucracy and red tape, which unfortunately has to be done and I’m the one who has to do it. But I am an ambitious person and I love learning new things. Every day I learn something new, even from an export invoice, from a problem with the bank, from the salaries I have to pay. One more step which gets me further into the heart of the company. And no matter how boring and often draining the chores can be, every time I sort something out or conclude a new process, I come out excited and fierce.

Do you have a particular story to tell?
A Lithuanian girl carrying a book comes into the store during fashion week. I’m sure she’s just coming in to look around, but instead she points out to me a necklace with aquamarine hearts. We sit down and talk for a bit, and she explains to me that she is looking for jewellery, a set of jewels for her wedding day. Her future husband has given her a very high budget and it’s up to her to choose and buy the most suitable jewellery. She hasn’t found anything she likes, even in the best jeweller’s. She’s fallen in love with the necklace and asks me to make a small modification which unfortunately doesn’t allow me to send it in time to the little village in Switzerland where the customer lives. I delivered it personally after having driven my car for 3 hours on the way there, and 9 on the way back because of an accident, the day before the wedding: she wore the dress and necklace because of me. This makes me happy.

Is there a particular jewel among those you sell or in your personal collection that you’re particularly fond of? Why?
A ring that I asked my dad for as a present for my twenty-fifth birthday when we still worked together. My birthday falls in January and, just before Christmas, I chose the stone and the frame and put it into production. Unfortunately it wasn’t ready until late March, when he was no longer there.

If you had to recommend a piece of jewellery, which would you choose? Why?
A ring. For a woman, hands are sensual, virtuous, skilled and accompany more feminine movements. I consider them to be the extension of a woman’s femininity.

A type of jewellery for which you are particularly famous are cufflinks. What makes the Villa cuffs so special?
They are men’s jewellery. One of the few accessories that a man is allowed to wear with a suit, to give colour and have a personality. About twenty-five years ago my father and my uncle decided to allocate one of only two of the Via Manzoni displays entirely to cuffs. At the time it really was an innovation. Until that time we had been a ladies’ jewellers, and they were proposing a new product dedicated to men. Since then there has always been a very high interest in our cuffs. They are a gift which is repeatable throughout time, thanks to the amount of models, colours and materials, with different combinations.

What are the strangest cufflinks that you’ve sold? To whom?
I’ve sold cuffs with ammonites, fossils, geodes, meteorites. We have something for all tastes and passions.

Can tell us about your Milan in three places and why?
The Porta Venezia gardens in the morning, with the cold winter light that penetrates through the trees and the sound of footsteps on the gravel of people walking along the paths, running, going to work.
Santa Maria delle Grazie. It’s a place which is very dear to me for two reasons: I attended the Collegio San Carlo for eight years (between middle and high school) , which overlooks the church. The funeral of my dad took place right there, in front of the same school which he had also attended in his time. That day was special. The square was full of people who were there for him and for us.
Largo Richini, in front of the porches of the State University, in the spring, with students sitting in the sun.

Your favourite place in Milan for the following occasions:
Brunch – I almost never have it, but if I had to to give one, Al fresco.
Lunch – The sandwiches from De Santis.
Aperitif (and your favorite cocktail) – Chiringuito from Santa Marta, Mojito with vodka instead of rum.
Dinner – Langosteria 10, Basara.
Evening – The ideal is to have a nice dinner at home with friends until late.
Relax – Simone Rubertelli in via Cosimo del Fante, my hairdresser par excellence.
Sport – I practice pilates and crossfit. One is the opposite of the other. One unloads my tension with a good workout, the other relaxes me, stretches me and works on my posture.

Weekend in town: tell us your ideal day?
A nice spring weekend of golf at my club a few minutes from Milan. I always try to get away from the city as soon as I can. I have to disconnect, get a change of air.

If your foreign friend who has never been to Milan arrived in the city, where could they absolutely not avoid?
A ballet at La Scala. They couldn’t miss it.

A treat for our readers: your favourite “hidden corner” of Milan. Can you reveal it?
A secret corner: Vicolo dei Lavandai on the canals. It is the Milan of my grandparents, the Milan of the Navigli, of their histories which go along with me.

Thanks again and good luck for all your projects! The most profound compliments of the editors of Flawless Milan.
After the interview, after the goodbyes, we go out into a sunny Milan; the light rays seem like an extension of the sparkle of colours and shades of the amazing stones which we had admired until just a moment earlier, which had filled my eyes and my heart with joy. And today our Milan seems to shine a little more.