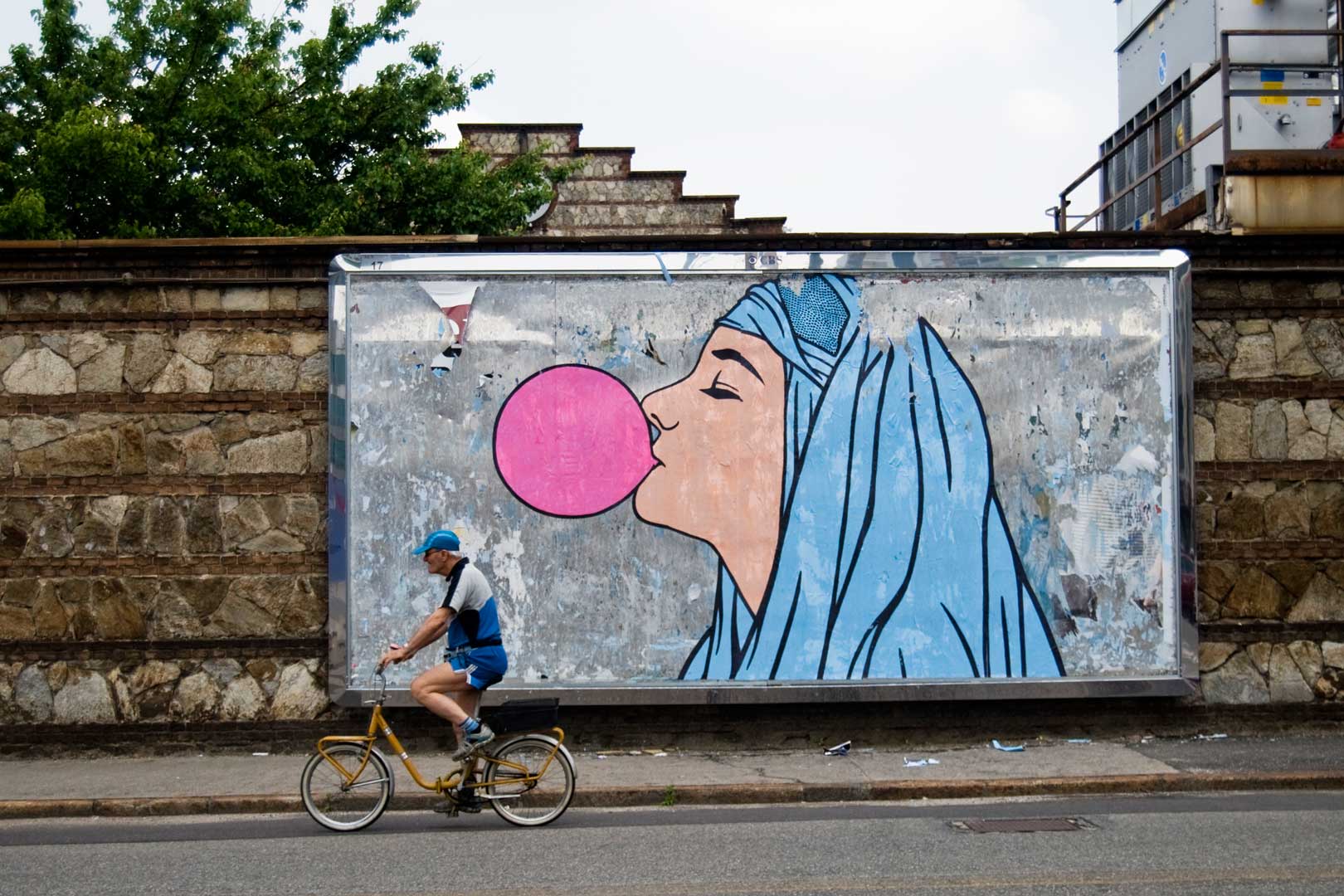 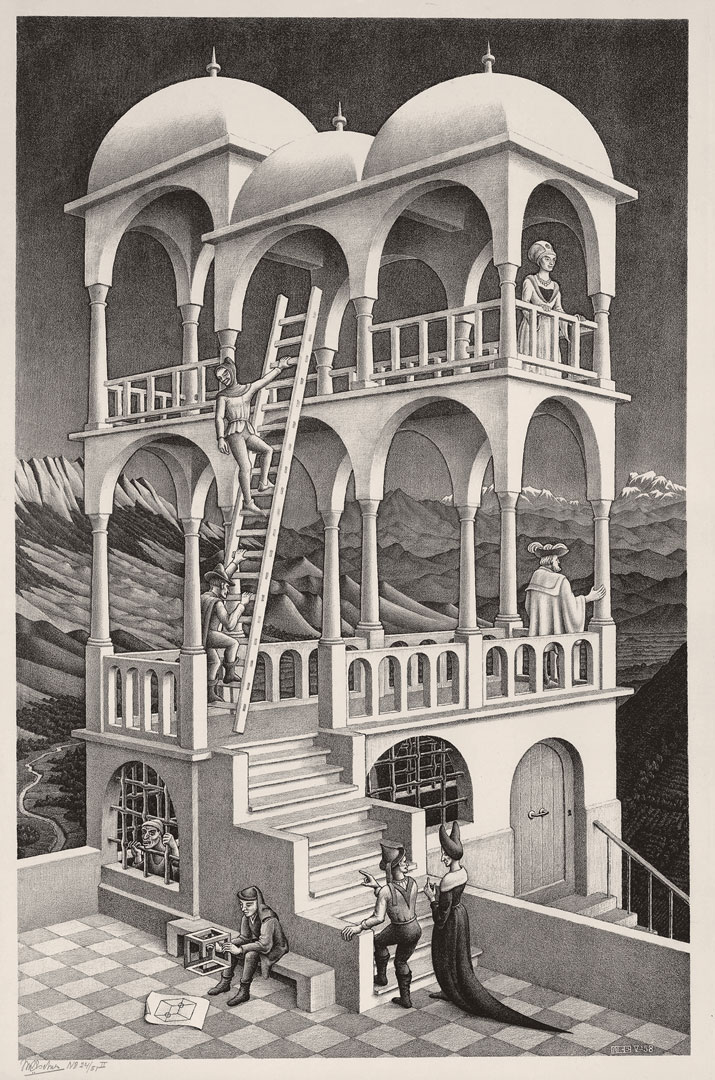 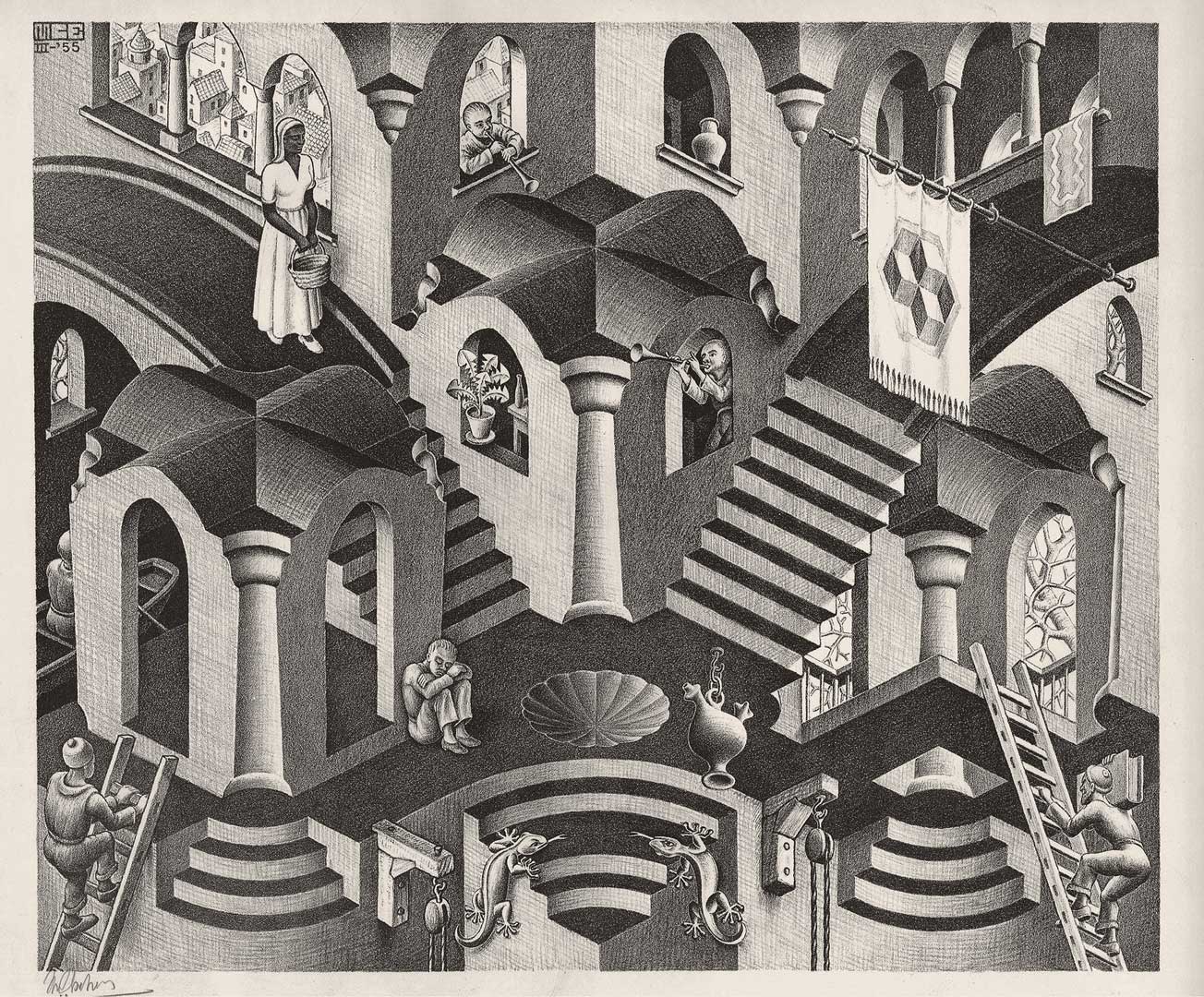 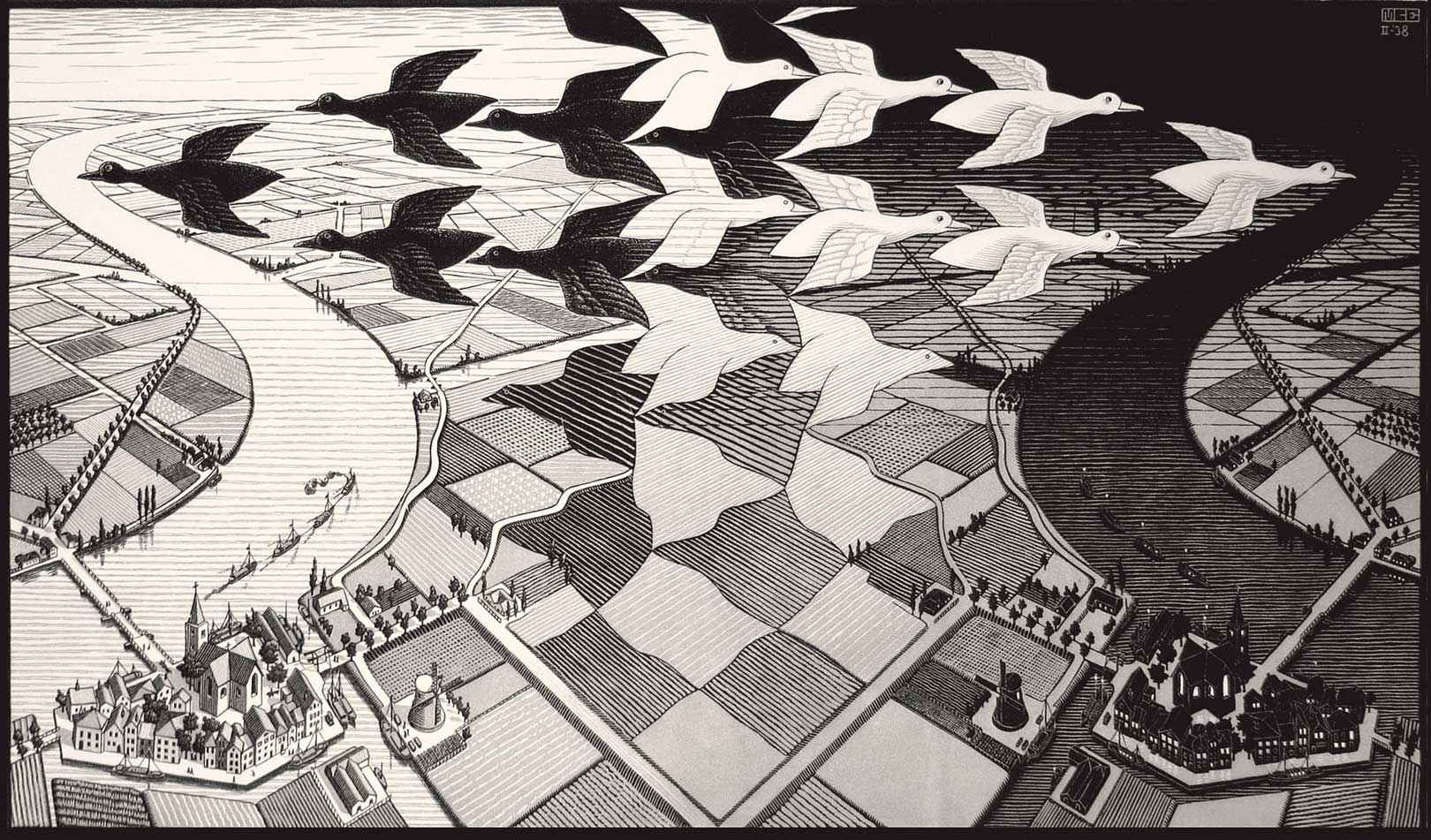 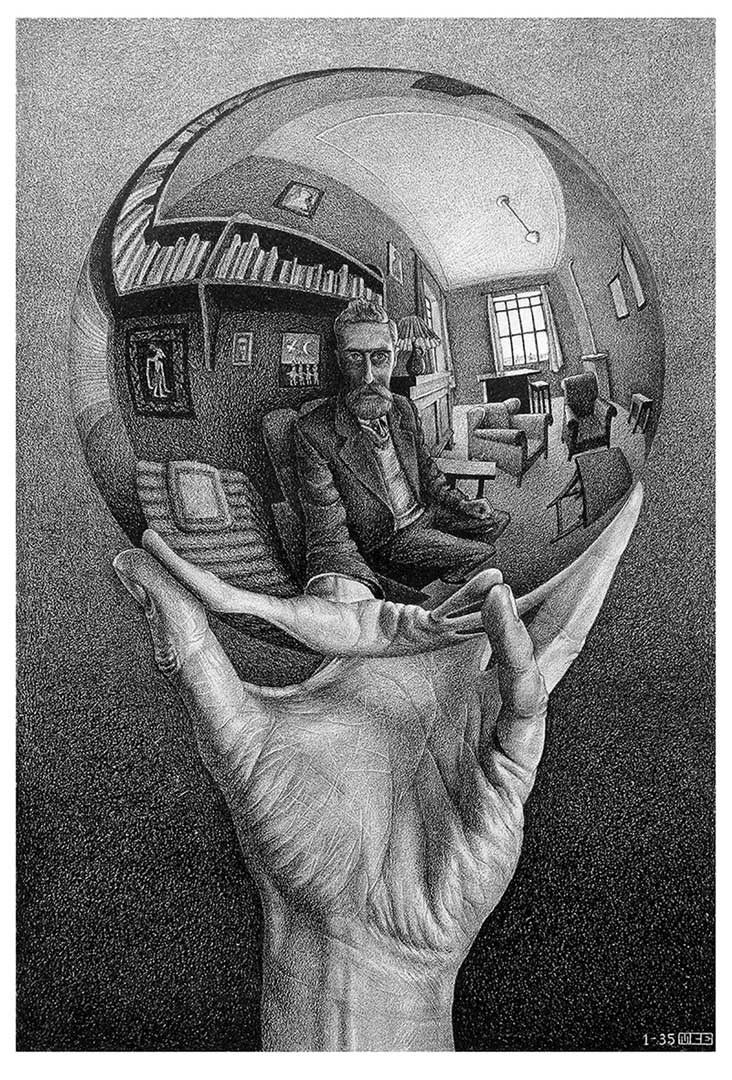 After enjoying great success in Rome, Bologna and Treviso, the works of the multifaceted graphic artist and Dutch intellectual Maurits Cornelis Escher (1898 – 1972) have finally come to Milan in an exhibition that will transport you into a labyrinth of compelling works.

It’s a captivating play of mirrors, reflective surfaces and amazing optical illusions, which draw you into a multidimensional reality in which stairs never seem to reach their ends. Geometric shapes morph into animals; two-dimensional lizards reach out of the paper, coming to life; fish transform into birds; and apparently impossible images and geometrical structures are brought into existence.

Examining Escher’s works, you almost feel as though you’re plummeting into a whirlpool of paradoxes on a trip in which mathematics and nature come together in some parallel reality. You travel a path which uncovers the artist’s creative development: imaginary places with extra dimensions, subjects from the natural world such as animals and flowers which will entrance you with their very structures, and even landscape pictures and glimpses of our own Italy, which Escher loved so much that he visited it and stayed in Rome for a number of years. 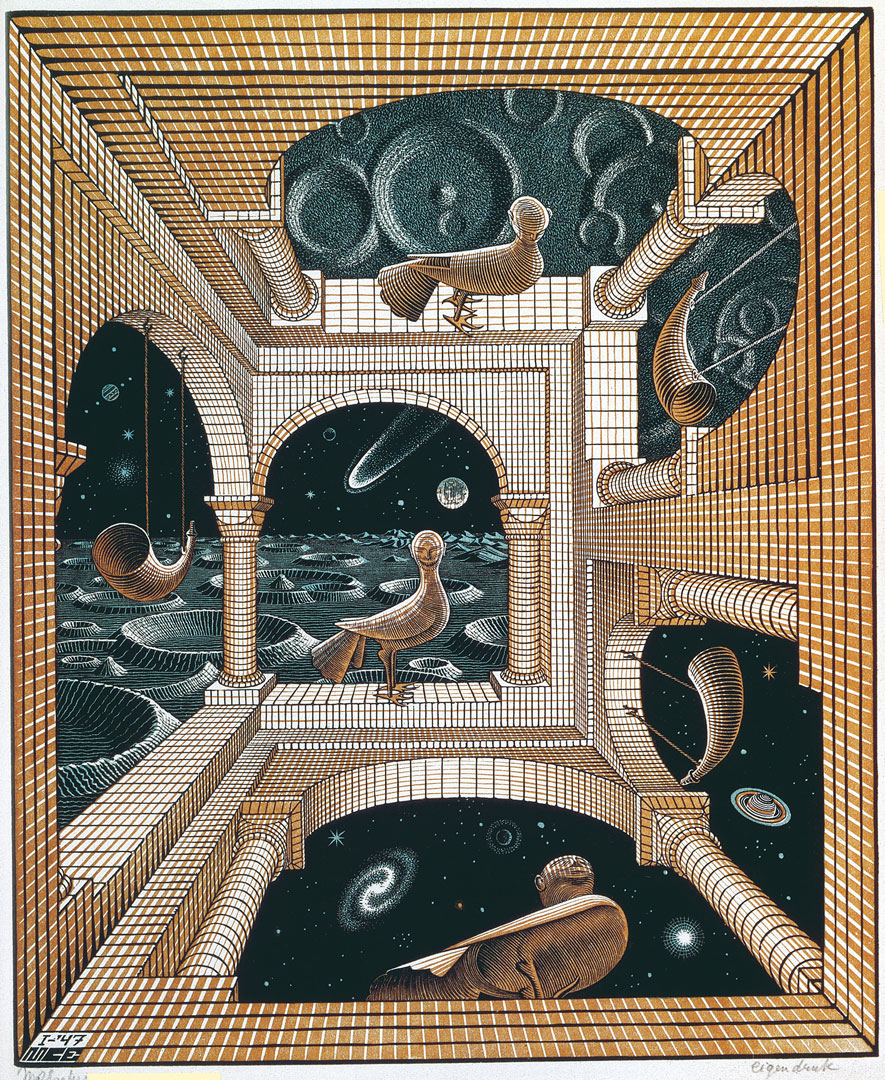 The various sections of the exhibition guide visitors in their exploration of the works: beginning with the influence of Liberty in the artist’s works and the marvels of Rome and Italy in works such as “Roofs of Siena” (1992), then moving on to the influences he took in when he travelled to the Alhambra and Cordoba in 1936. This was when he became
absolutely fascinated by the geometrical shapes and tessellation in the Moorish ornamentation.

The next section focuses on reflective surfaces and structures in spaces: it’s here that Escher’s deliberation about the centrality of the artist and their ability to pass comment on reality comes to light. Here we can appreciate Escher’s truly artistically mature works. Let yourself be subsumed by the self-portrait “Hand with Reflecting Sphere” (1935). Lose yourself in “Relativity (or House of Stairs)” (1953). Examine the odd stance of the columns in Belvedere” (1958). Absorb yourself in “Print Gallery” (1956), which you can go in to through a play of video cameras, which create a real, swirling optical illusion. 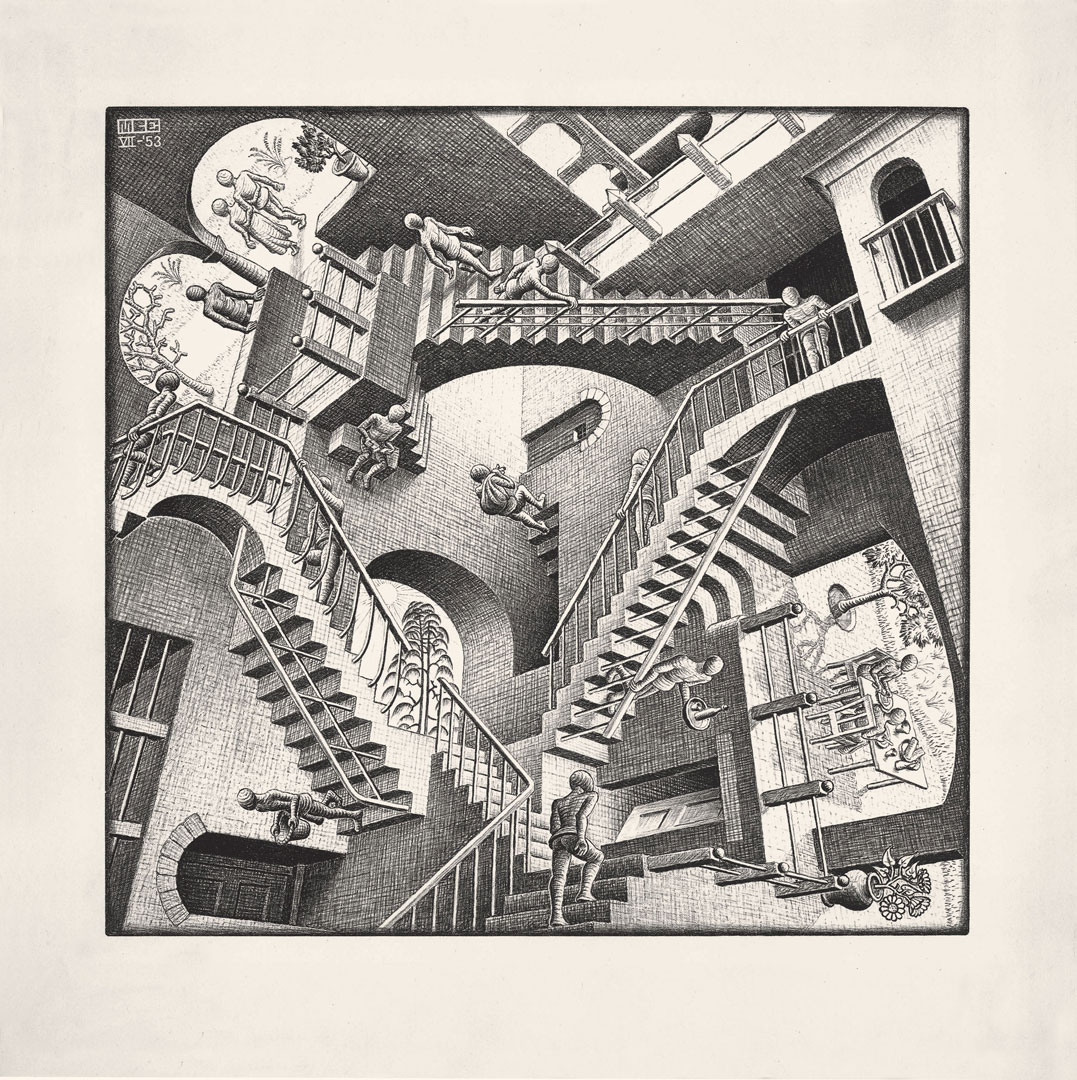 Continue on to the Metamorphosis section, which takes its name from the masterpiece of the same name “Metamorphosis II” (1939). This work focuses on the idea of transformation: the subjects change shape in accordance with a continuous narrative stream, taking ever-different forms. This theme comes up again in other similar works, such as the masterful piece “Day and Night” (1938), in which flocks of birds depicted in positive and negative fly in both the light of day and the darkness of night, blending with the shapes of the fields below.

After this, the exhibition turns to the more mathematical aspects of Escher’s pieces and the geometrical paradoxes depicted therein. There is a section on Eschermania, which looks specifically at the extent to which the influence of the Dutch artist’s accomplishments underpins the culture of the twentieth century. This section features a set of works from artists, directors, musicians and graphic designers. Standing out among them is the famous album cover of Pink Floyd’s “On the run””, a tribute to the great master’s amazing, visionary lessons.

Notes:
The ticket office closes one hour before closing.

All major credit and debit cards
You may be also interested in...