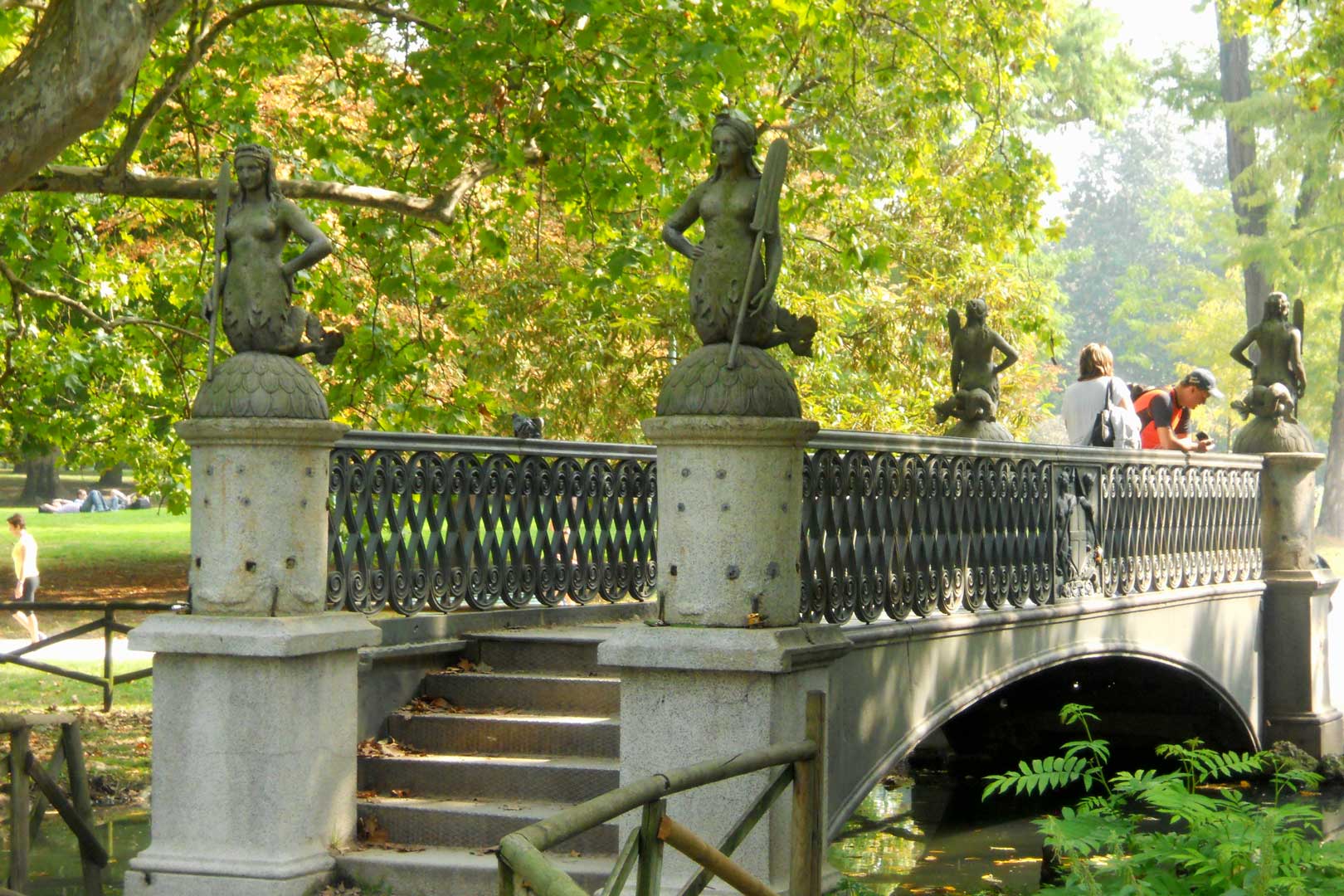 The Mermaids of Parco Sempione

Protecting lovers rather than abducting sailors

Once upon a time there was a city, with a waterway running through it, which a genius wisely rerouted in order to allow development and commerce to proliferate. Mermaids also dwelled in this city, and their welcome presence was heartening to the city’s youth. The city is no longer, but the sirens are still there. They’ve simply moved.

Yes, you read right. How do you find them? The map of dreams is a simple one: get to the Triennale, go through The Mysterious Baths Fountain and you will enter Parco Sempione. Down the path, little more than a few steps, you will find a watery mirror in front of you, populated with ducks that are idling about, and the odd goldfish to be seen just beneath the surface. The pond is framed with bald cypress, which become tinged with every shade of red in the fall, transforming them into majestic columns of flame.

Right here, among the leafy branches, the faces of four daring damsels with mermaid tails can be seen, they are called the Ghisini Sisters. They owe their name to the material they were made from, pig iron (“ghisa” in Italian). They are also informally called “i sorei del pont di ciapp” (the sisters of the bridge with the behinds). Custom dictates that in order to keep from pointing out their more buxom properties, they are referred to by the far less provocative of their attributes situated on the lower half of their bewitching body, covered by their siren fish tails.

They are not strictly sirens in that they are portrayed with a double tail, a fertility symbol calling back to folklore of the Melusine mermaids, who actually have a double tail as a defining characteristic. The Melusine are female water spirits who are destined to marry a knight as long as he does not see them in their true form, that is, wearing their fish or serpent tails.

Melusina, a personification of these water nymphs, is a fish-woman and a supernatural monster, but is also a wondrous female being that counsels, helps make right decisions and makes people fall in love. She can be cruel, she can come and go, but she is also a goddess of plenty, making palaces grow and making fields turn fruitful in abundance. It is little wonder that couples in love would kiss on the bridge and touch the statue behinds in the hope of assuring their own fertility and prosperity. But the story of this bridge and its guardians does not start here, at Parco Sempione.

At the time when the Naviglio canal ran through the city, which is where the bypass is now, a bridge was planned to link the San Damiano district with the city center, around the area of the Pietro Mascagni road. It was designed by the architect Francesco Tettamanti, who placed four statues portraying these mermaids at the end of each abutment as an embellishment, each holding an oar in their hands.

The bridge holds a record: it was the first bridge built in Italy made of metal. It was opened on June 23rd, 1842, in the presence of Rainer Joseph, Viceroy of the Lombardo-Venetian Kingdom and Archduke of Austria. Well mannered women would lower their eyes when crossing the bridge, while climbing up and touching the mermaid’s ample bosoms had become a propitious ritual among young boys.

At the beginning of the 1900s growing public opinion was that the Navigli canals were a danger on foggy nights, as well as a strong draw for suicides. Then, when automobiles came into use, the Navigli fell into disuse and became an obstacle to traffic; its waters turned into industrial usage and became polluted. The internal ditch experienced further decline as it became unhygienic. Thus work began to cover the waterways, ending in 1930, and the bridge was forced to move to Parco Sempione. Taken apart piece by piece, it was rebuilt at the location where we now find it.

And, as in folklore, it is where lovers still come to gain the Sisters’ protection.