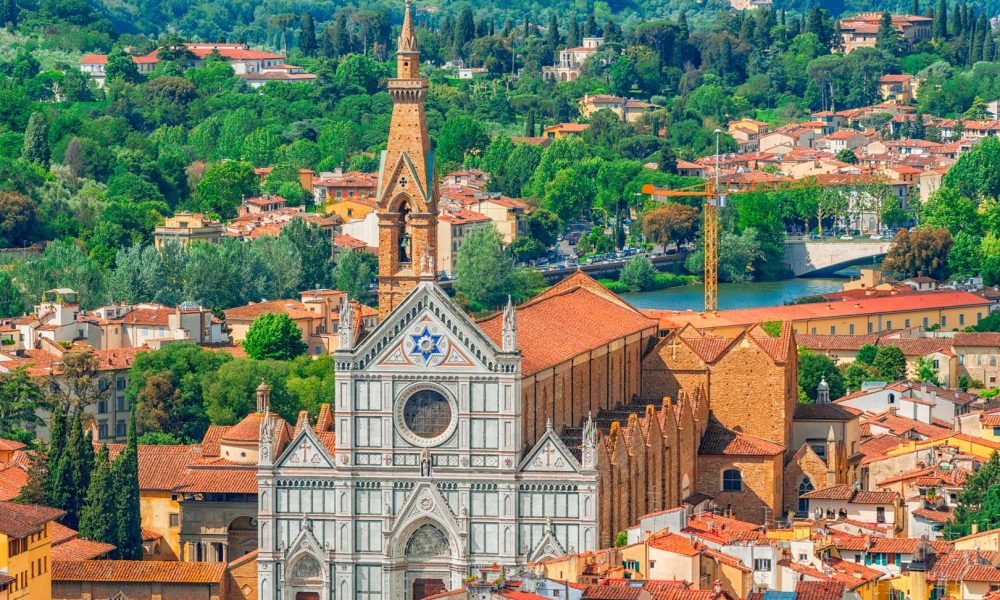 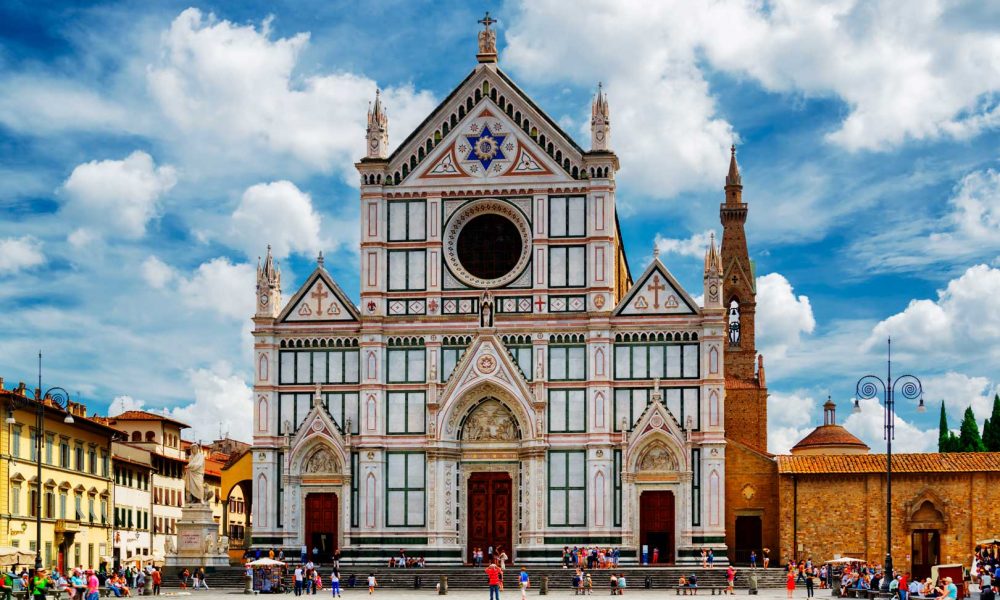 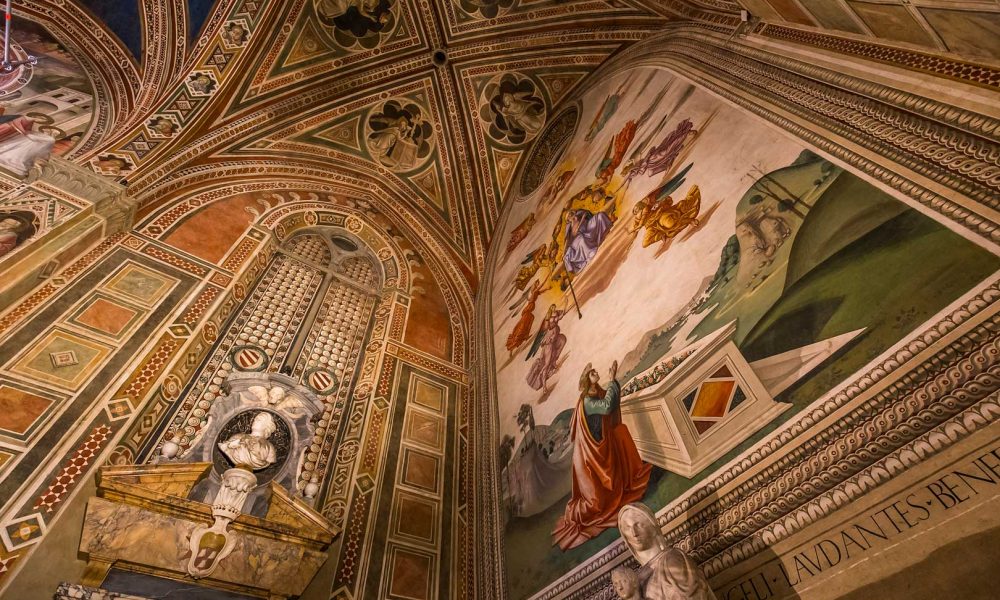 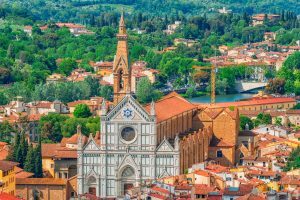 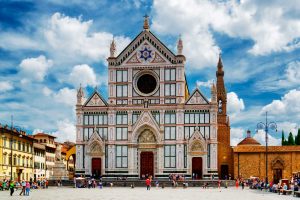 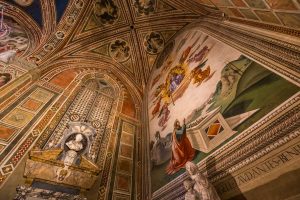 One of the most suggestive churches in Italy

Santa Croce in Florence is much more than a simple church, much more than a simple architectural masterpiece. Perhaps for us, modern people, its name doesn’t trigger many associations but for more than a century, at least since the times of Napoleon and Foscolo, that of Santa Croce has been an authentic myth. This is indeed the church that contains the tombs of some of the most illustrious Italians in our history: Vittorio Alfieri, the women of the Bonaparte family, Michelangelo, Galileo Galilei, Lorenzo Ghiberti, Giocchino Rossini and Ugo Foscolo himself.

When Francis of Assisi moved to Florence, in the first half of the thirteenth century, he decided to settle on an island of the Arno, which is today more or less in correspondence with Piazza Beccaria. There an oratory was founded that gradually grew until it was completely renovated. But internal problems arose in the community of friars, split between those who preferred a poor and modest style and those who wanted to turn it into something much more grandiose: that would become the Basilica of Santa Croce.

In the end the church was completely rebuilt. The architect in charge was the famous Arnolfo di Cambio. The works proceeded well for a little over twenty years, but a series of natural disasters that struck the city slowed down the works that were supposed to have been completed only in 1385. Only around the middle of the fifteenth century, however, the church was consecrated in the presence of the Pope. 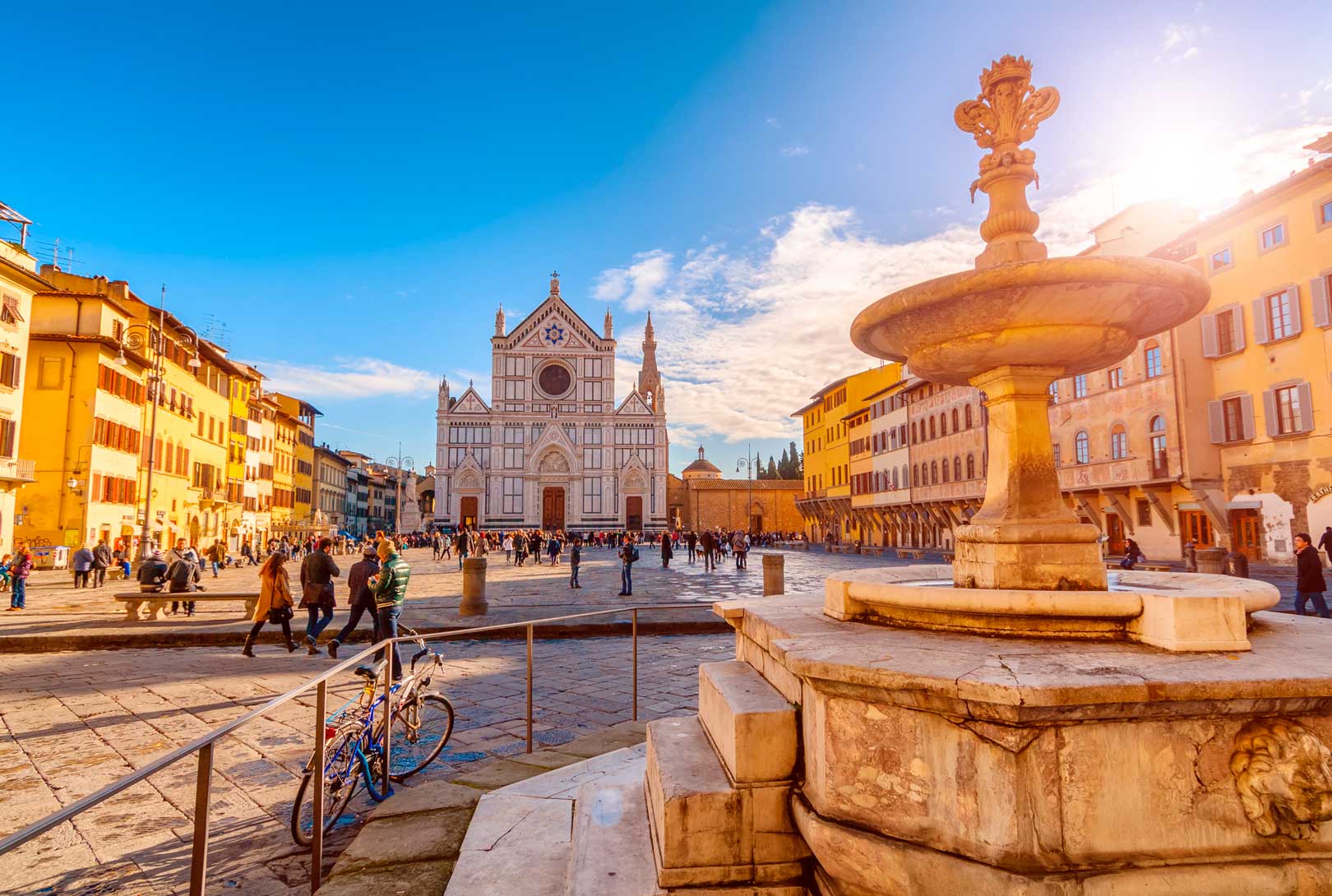 The facade, however, remained unfinished for a series of economic controversies and ended up being completed only four centuries later, in the second half of the nineteenth century. The only decoration, until then, was a symbol of Christ on the rosette and a bronze statue of Donatello, the San Ludovico of Toulouse, now kept in the museum of the basilica. The new facade was built by the architect Niccolò Matas, belonging to the Jewish religion, who is said to have signed his grandiose work with a six-pointed star at the highest point of the façade. Also during the nineteenth century, the famous statue of Dante, carved by Emilio Pazziwas placed on the churchyard.

The interior is a triumph of works of art: the chapels frescoed by Giotto, the terracotta of Giovanni della Robbia in the Pulci-Berardi Chapel, the Crucifix and the Annunciation sculpted by Donatello, tombstone by Bartolomeo Valori sculpted by Ghiberti; or the Medici Chapel designed by Michelozzo and a glazed terracotta altarpiece by Andrea della Robbia. And then the works by Taddeo Gaddi and his son Agnolo, the paintings by Giovanni del Biondo and Cimabue, the sculptural works by Giovanni da Balduccio and many, many others.

Another masterpiece preserved inside the first cloister of the basilica is the Pazzi Chapel designed by Filippo Brunelleschi, who began to build it in 1429, just after the end of the works at the Old Sacristy of San Lorenzo. From the outside, the structure recalls that of a triumphal arch and, on the façade, stands the large umbrella dome. Inside, on the white plaster of the walls and the gray of the architectural elements, the terracotta Apostles of Della Robbia stand out.

When you visit Santa Croce, in short, take your time, explore every corner and discover a treasure chest that holds masterpieces from all the centuries, bringing together the memory of more than five centuries of art, history and culture under one roof.