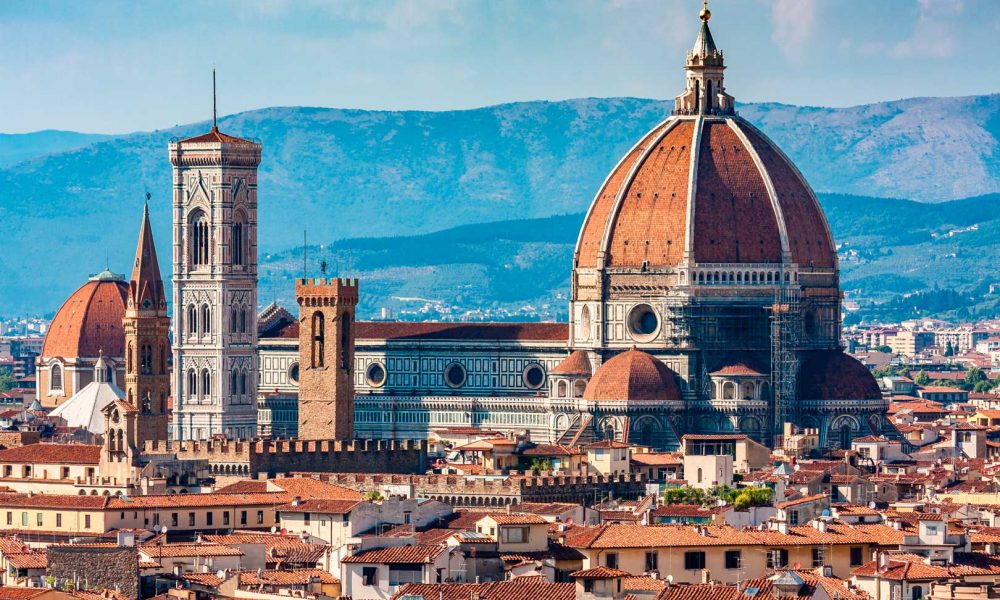 You can’t say that you really have visited Florence if you don’t pass through Piazza del Duomo to admire the majesty of the architectural works that dominate the central square of the city. The Cathedral of Santa Maria del Fiore, the Baptistery of San Giovanni and Giotto’s Bell Tower with their distinctive polychrome marbles have become emblems of the Tuscan capital and main subjects of postcards and souvenirs. 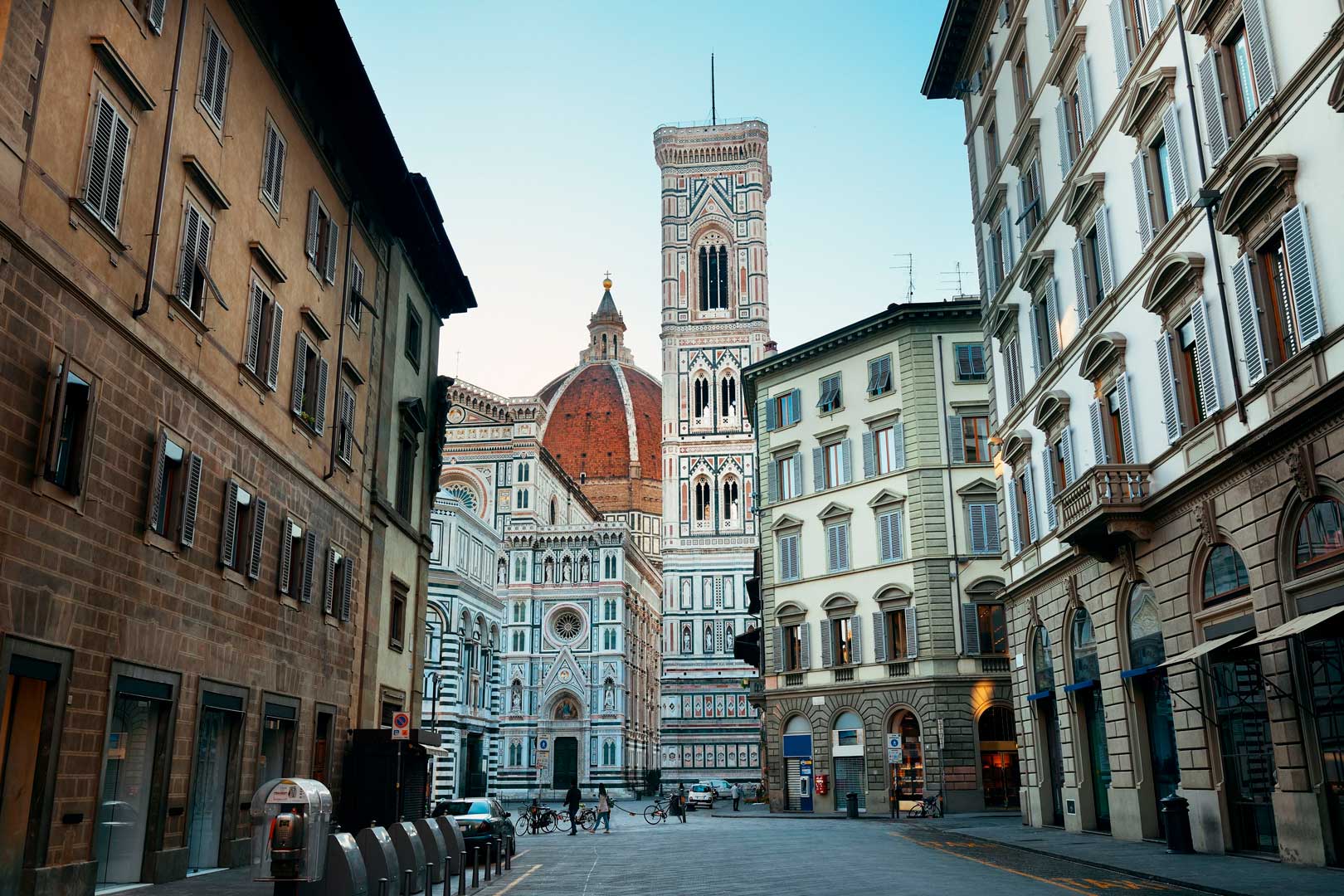 The cathedral, more commonly called the Duomo of Florence, with its size and beauty dominates the square. This masterpiece of Italian Gothic with its atypical plan consisting of three naves culminating in a triconca roundabout was built by the Signoria Fiorentina from 1296 and completed in the structure only 140 years later, in 1436. The works were initially entrusted to Arnolfo di Exchange and, over the decades interrupted and resumed countless times, passed into the hands of artists such as Giotto and Francesco Talenti. The splendid façade with polychrome marbles dates back to the nineteenth century and was executed with the aim of emulating the Florentine decorativism of the 14th century. At the time of its construction, the cathedral was the largest church in Europe and is still counted among the most impressive religious buildings on the continent. 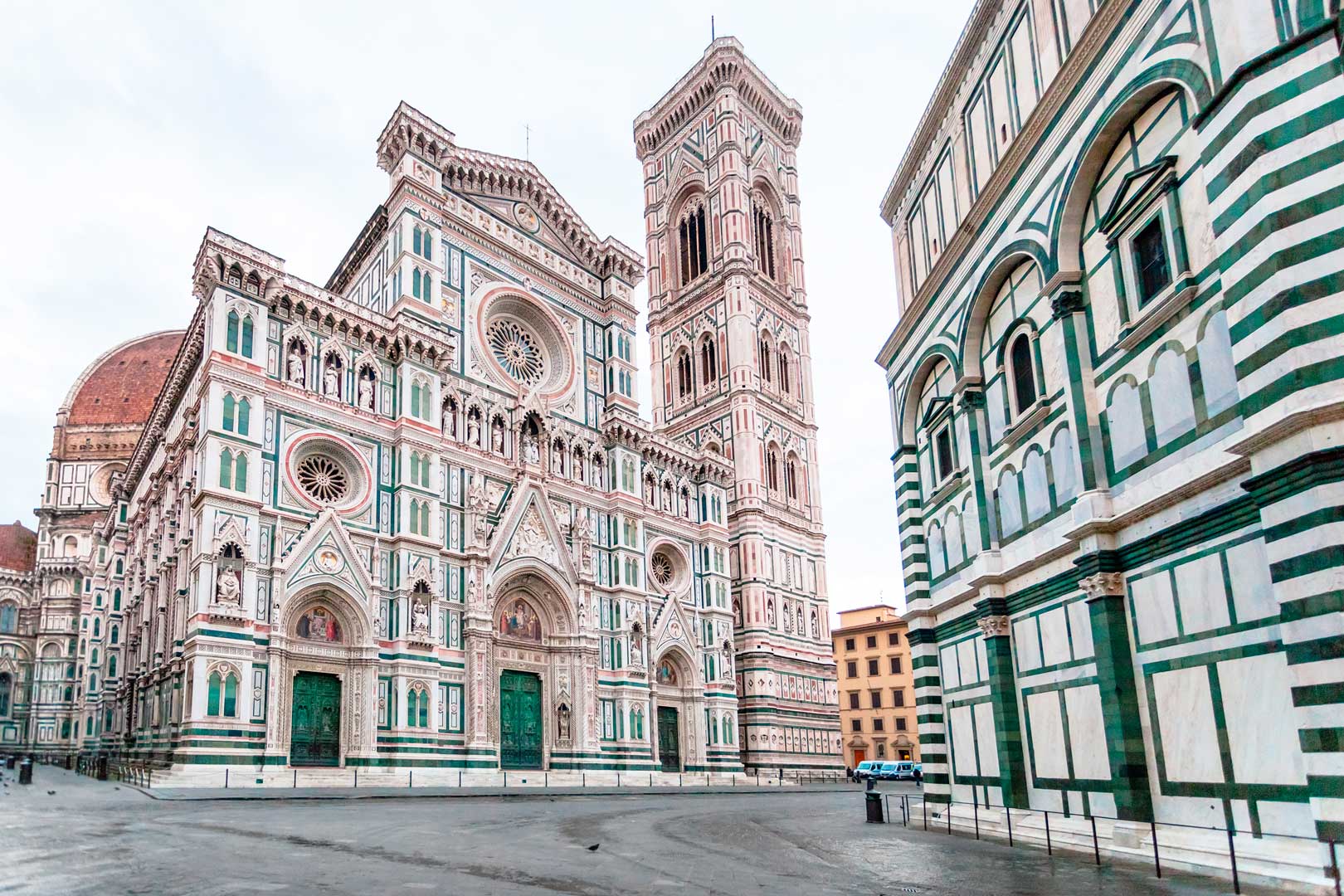 Among the artistic marvels gathered in the cathedral stands Brunelleschi’s dome, a masterpiece of human ingenuity built starting from 1420. Initially the dome, although to tell the truth we should speak of octagonal vault, had to be covered by a large mosaic but at the behest of Cosimo I de’Medici was frescoed by Giorgio Vasari and his pupil Federico Zuccari with a cycle representing the Last Judgment, the same iconographic theme of the baptistery. 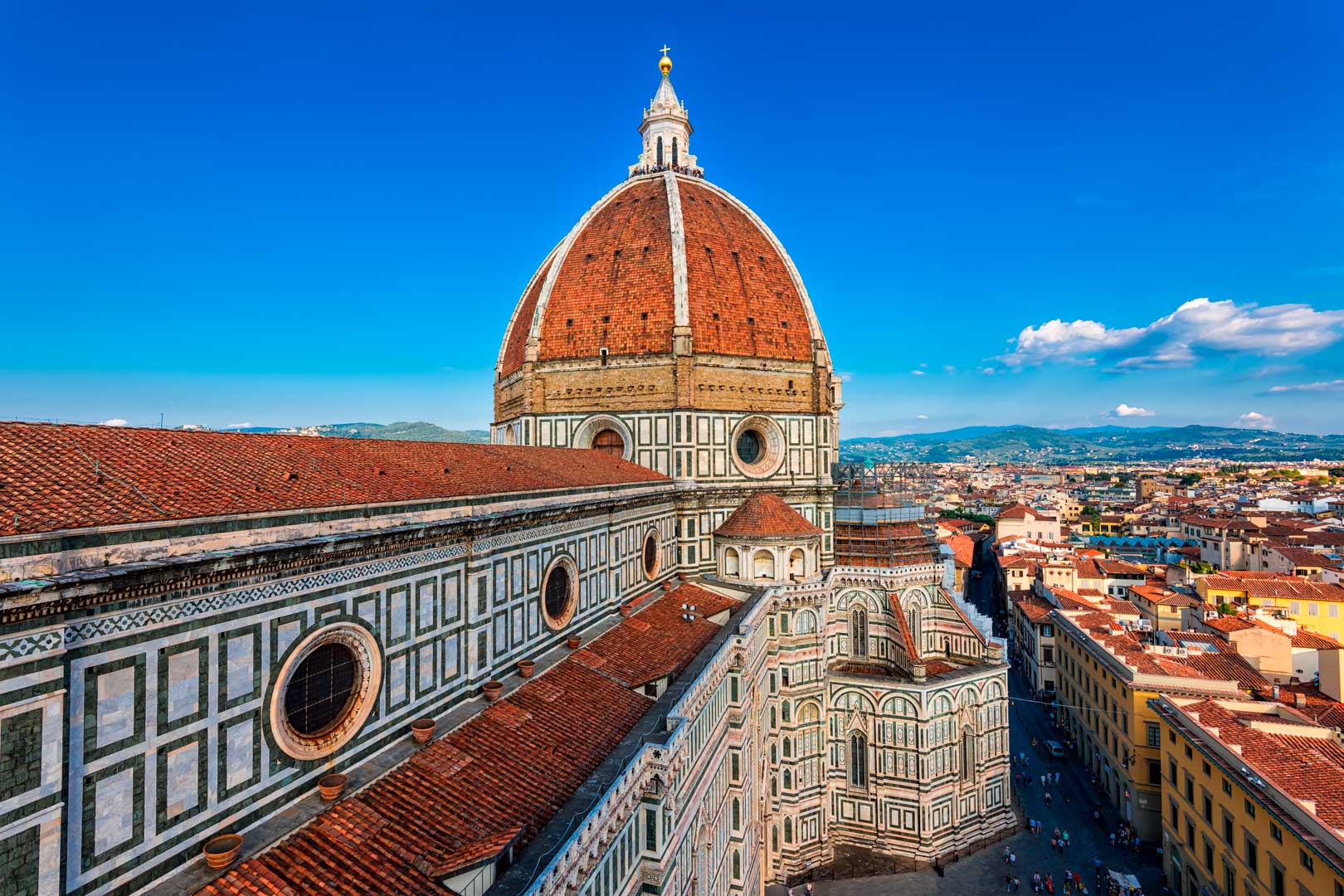 A campaign of excavations begun in 1965 also brought to light a hidden wonder in the square: the remains of the early Christian basilica of Santa Reparata, a building on whose ruins the Duomo was built. These excavations can now be visited: here they were, in fact, found frescoes, tombs of illustrious Florentine figures, mosaic floors and walled remains of Roman houses. 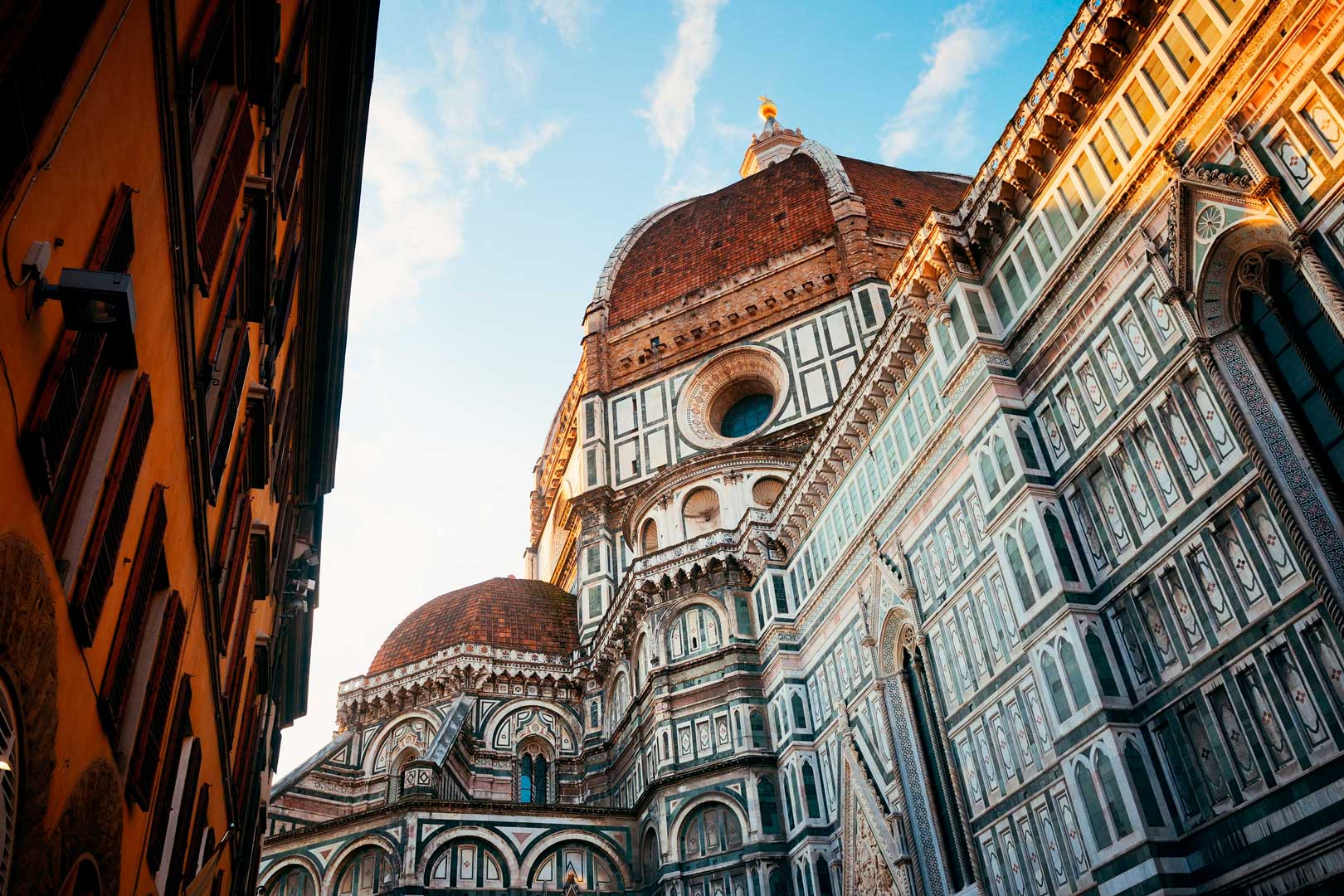 In front of the Cathedral, then, stands the Baptistery of San Giovanni, an octagonal religious building that boasts a precious mosaic to decorate the dome. The building, probably of medieval origin, is embellished by three splendid bronze doors on the south, north and east sides of the baptistery. The most famous is that of the east side, the work of Ghiberti in gilded bronze, which deserved the appellation of the Door of Paradise, conferred by Michelangelo in virtue of the beauty of the scenes of the Old Testament with which it is decorated. 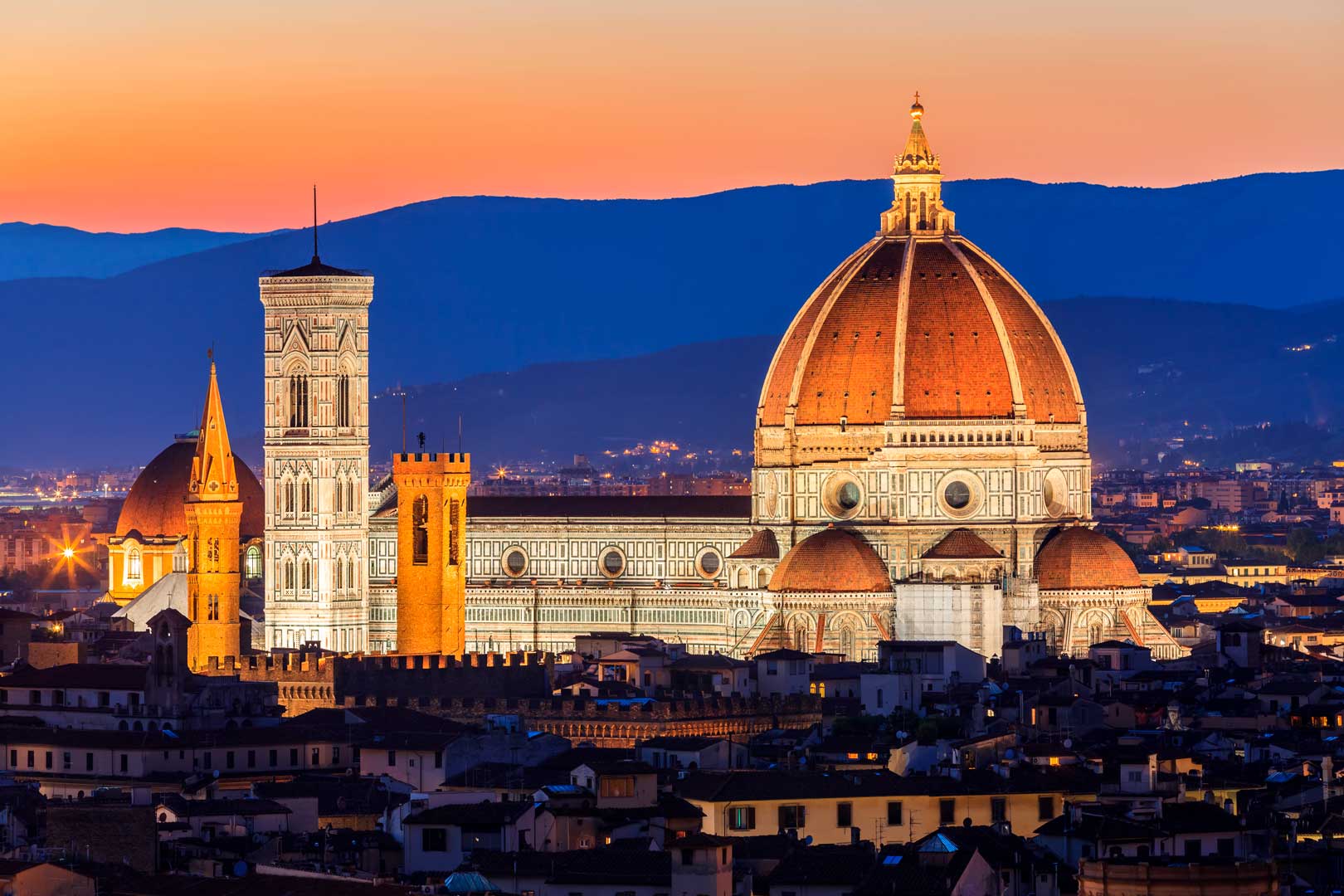 Finally, Giotto’s bell tower is the last marvel of the complex of Santa Maria del Fiore. Built starting from 1334, it is almost 85 meters high and is considered the most beautiful bell tower of the peninsula. The bell tower culminates with a large panoramic terrace by Talenti who re-designed the Giottesco project, which instead provided a cuspidate spire roof.