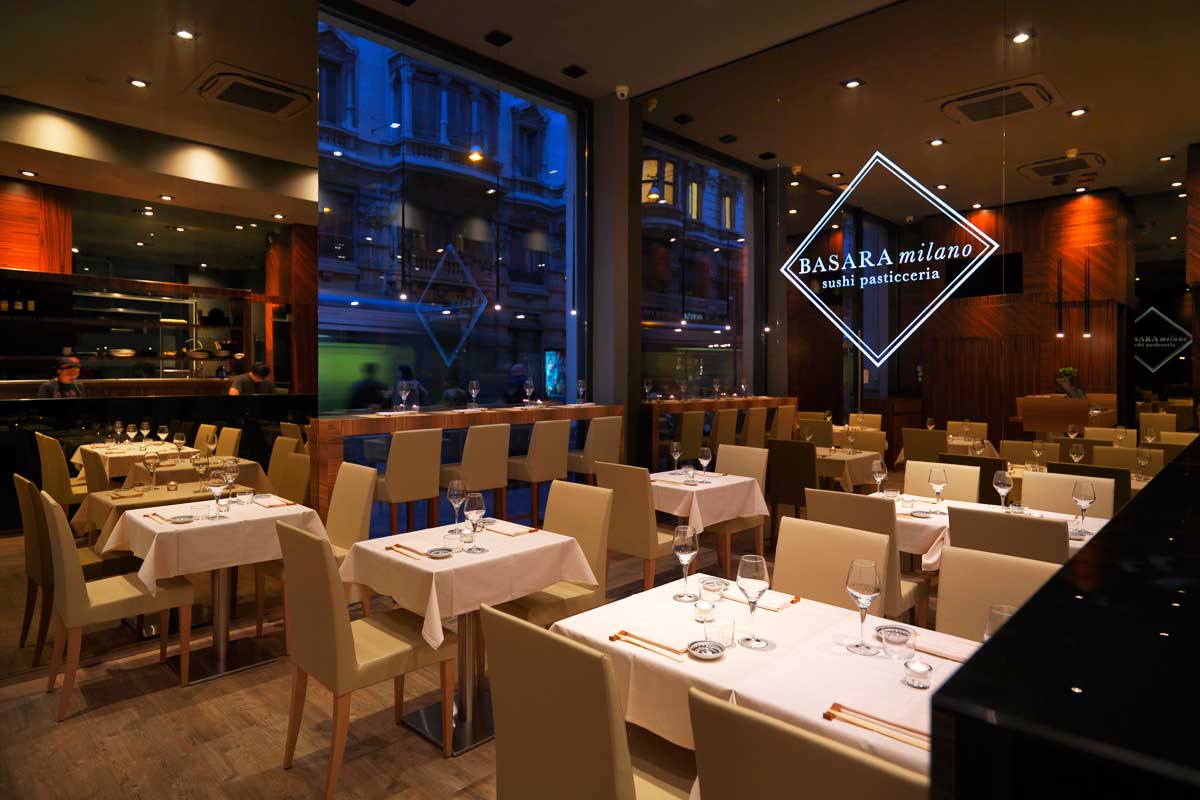 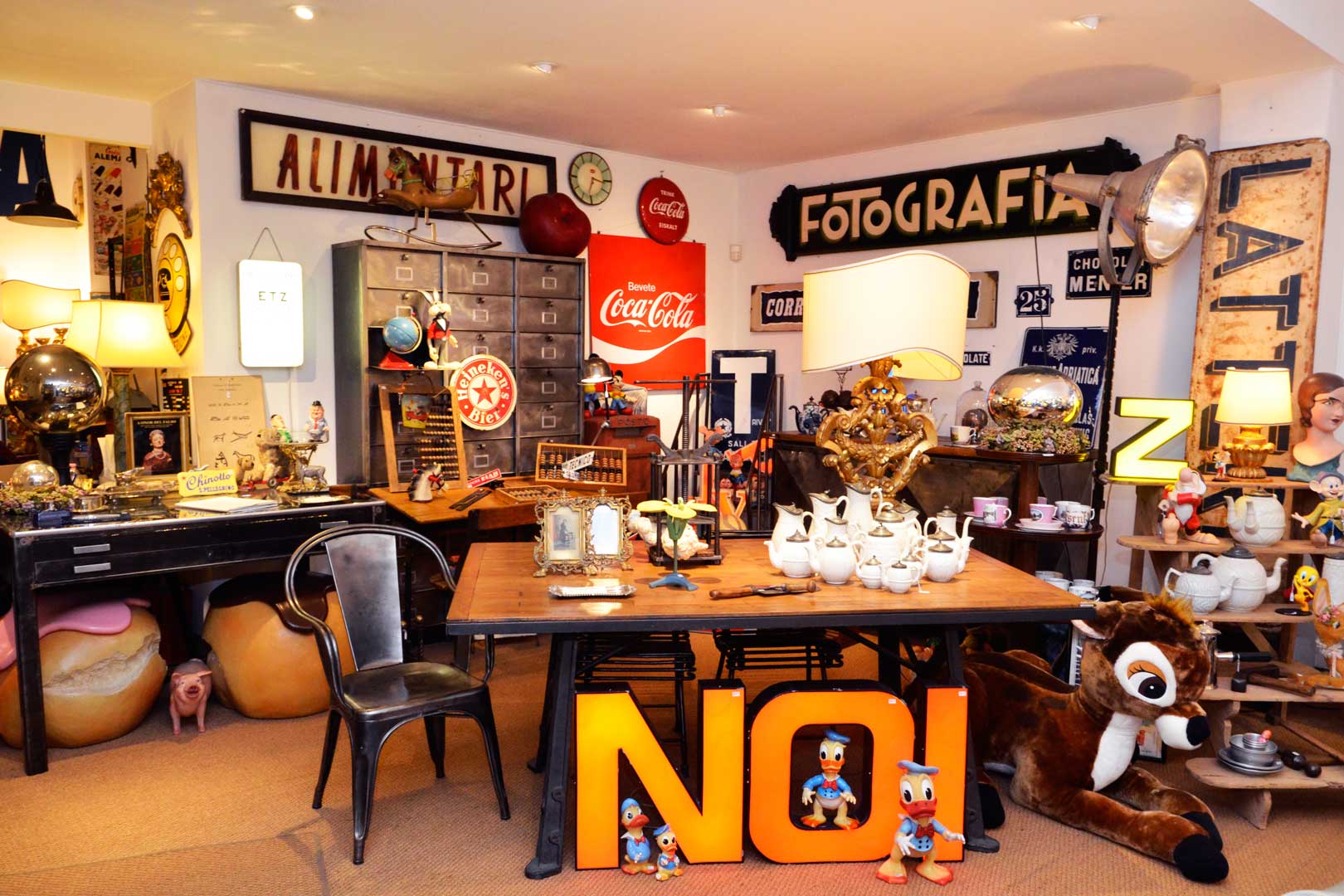 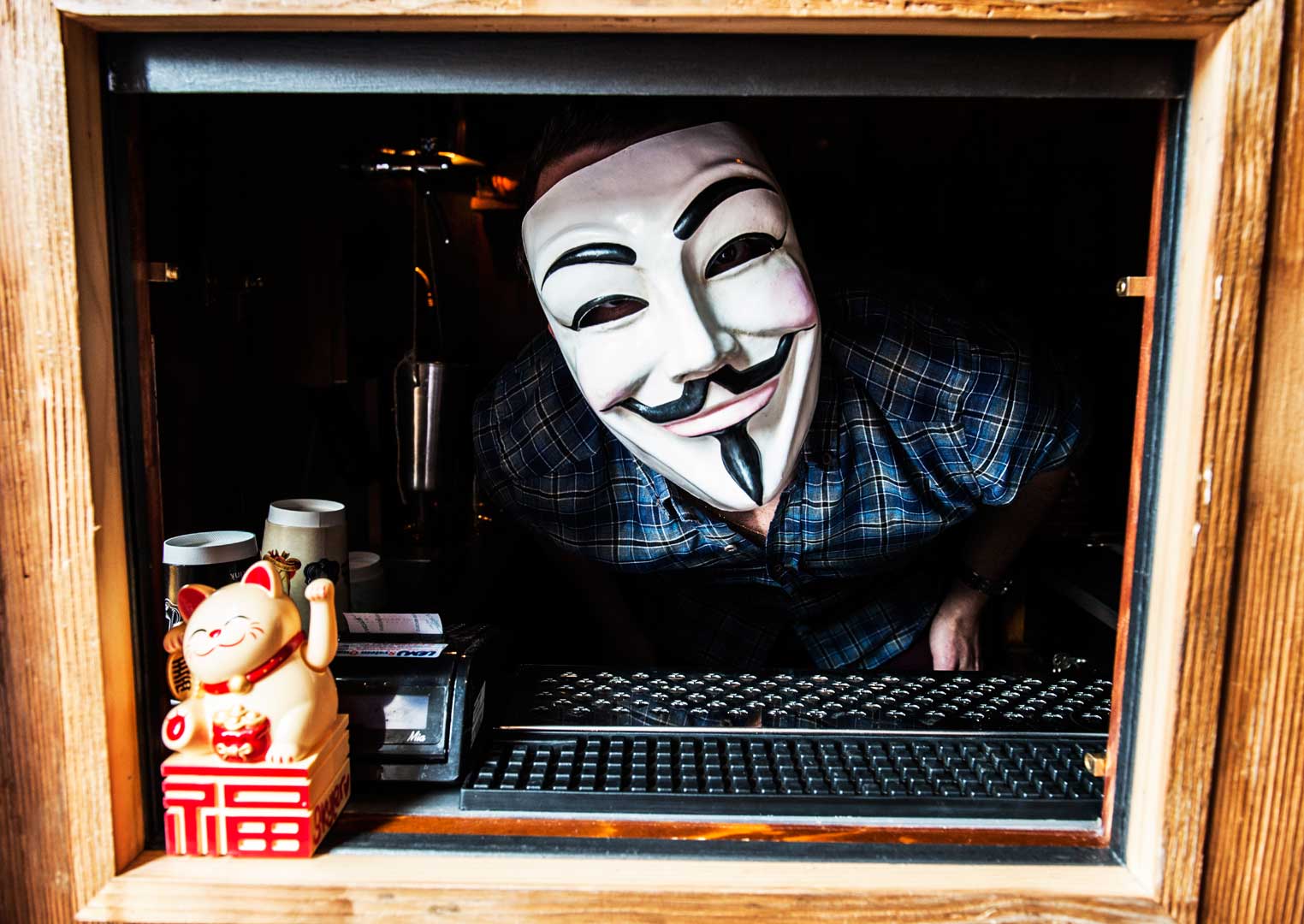 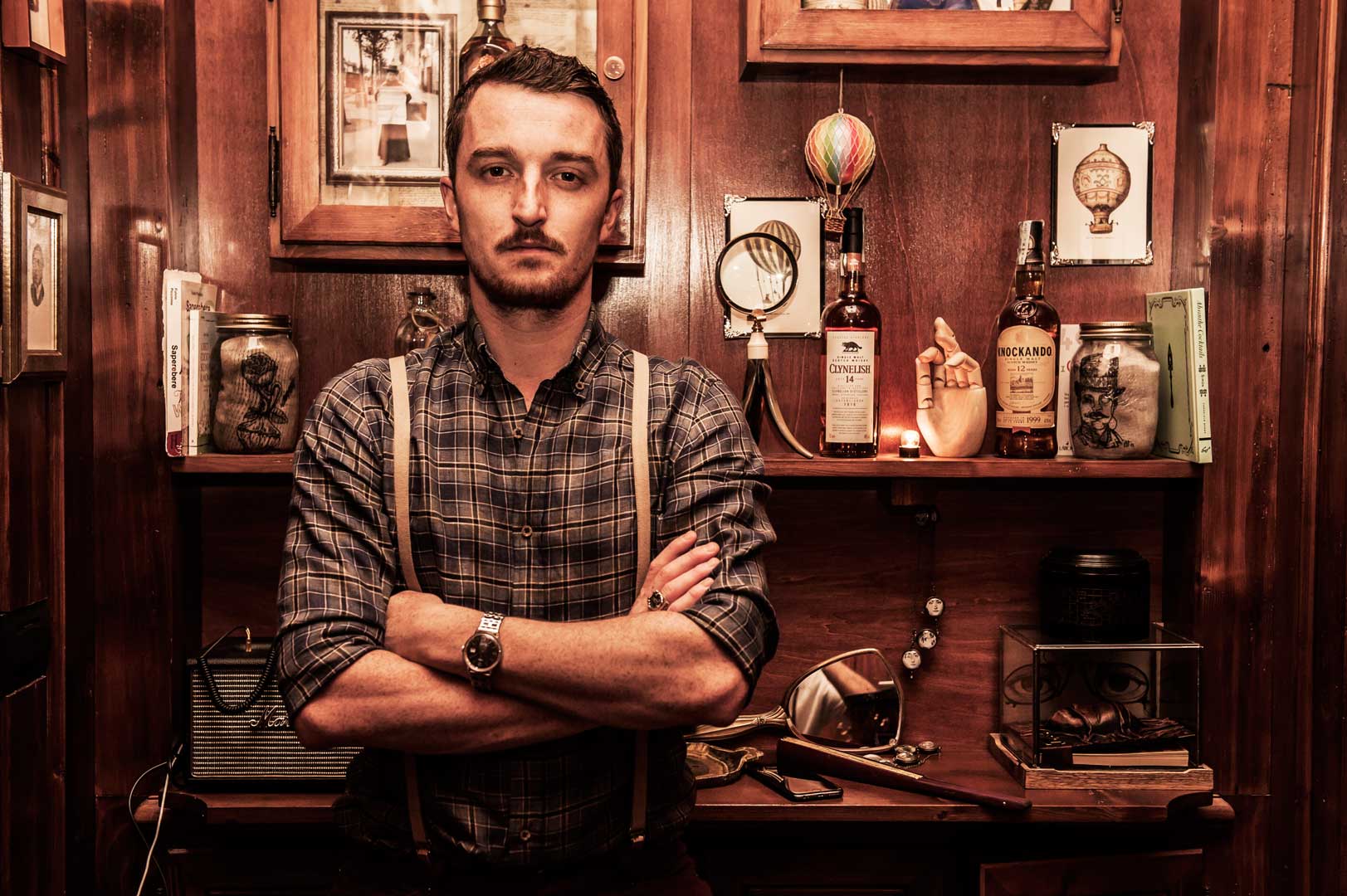 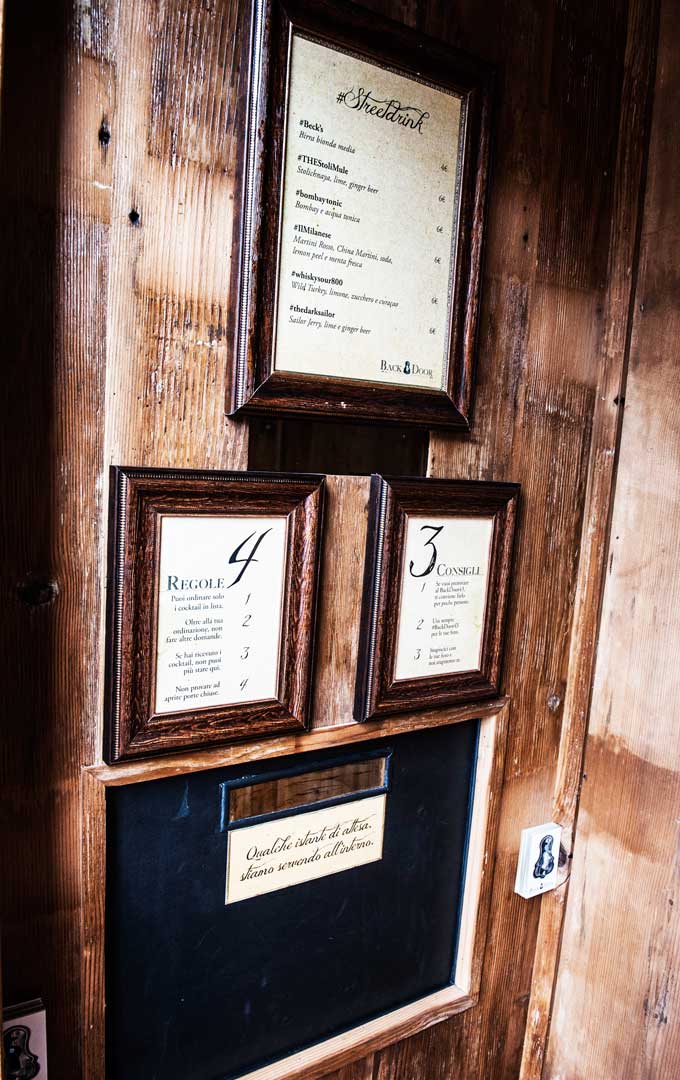 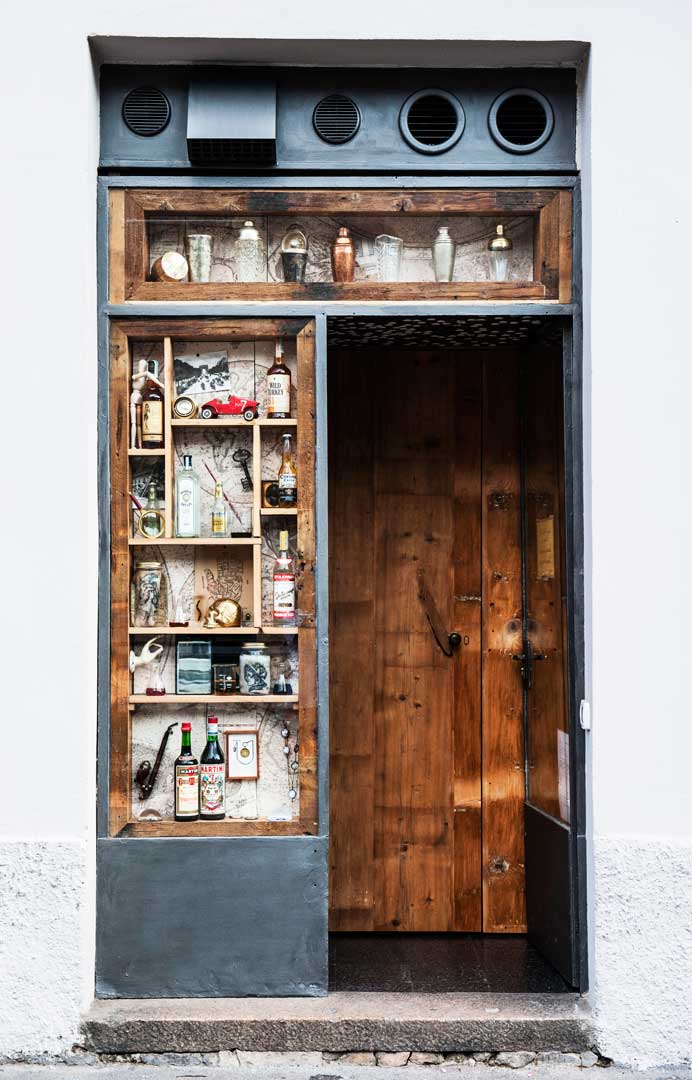 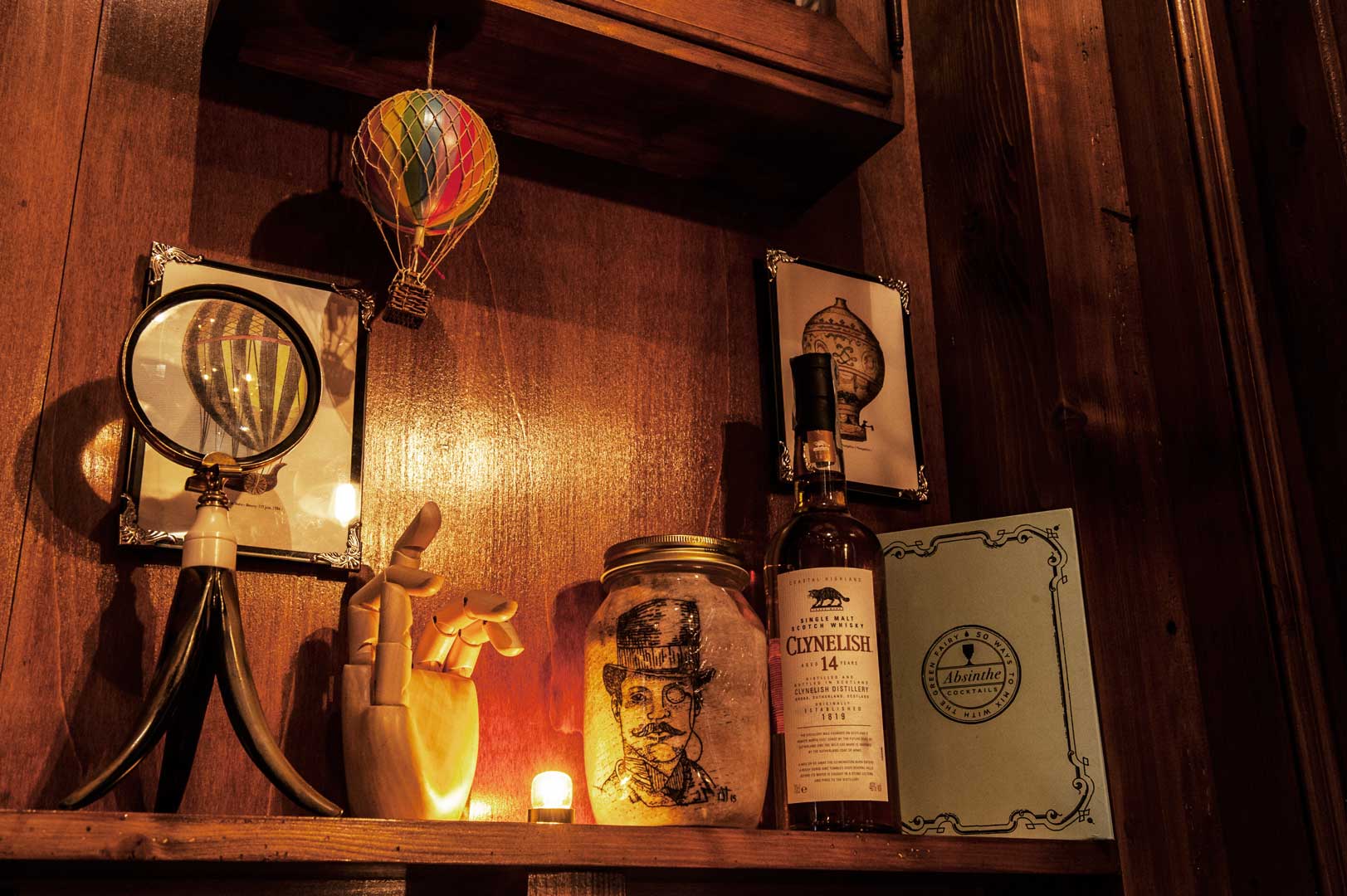 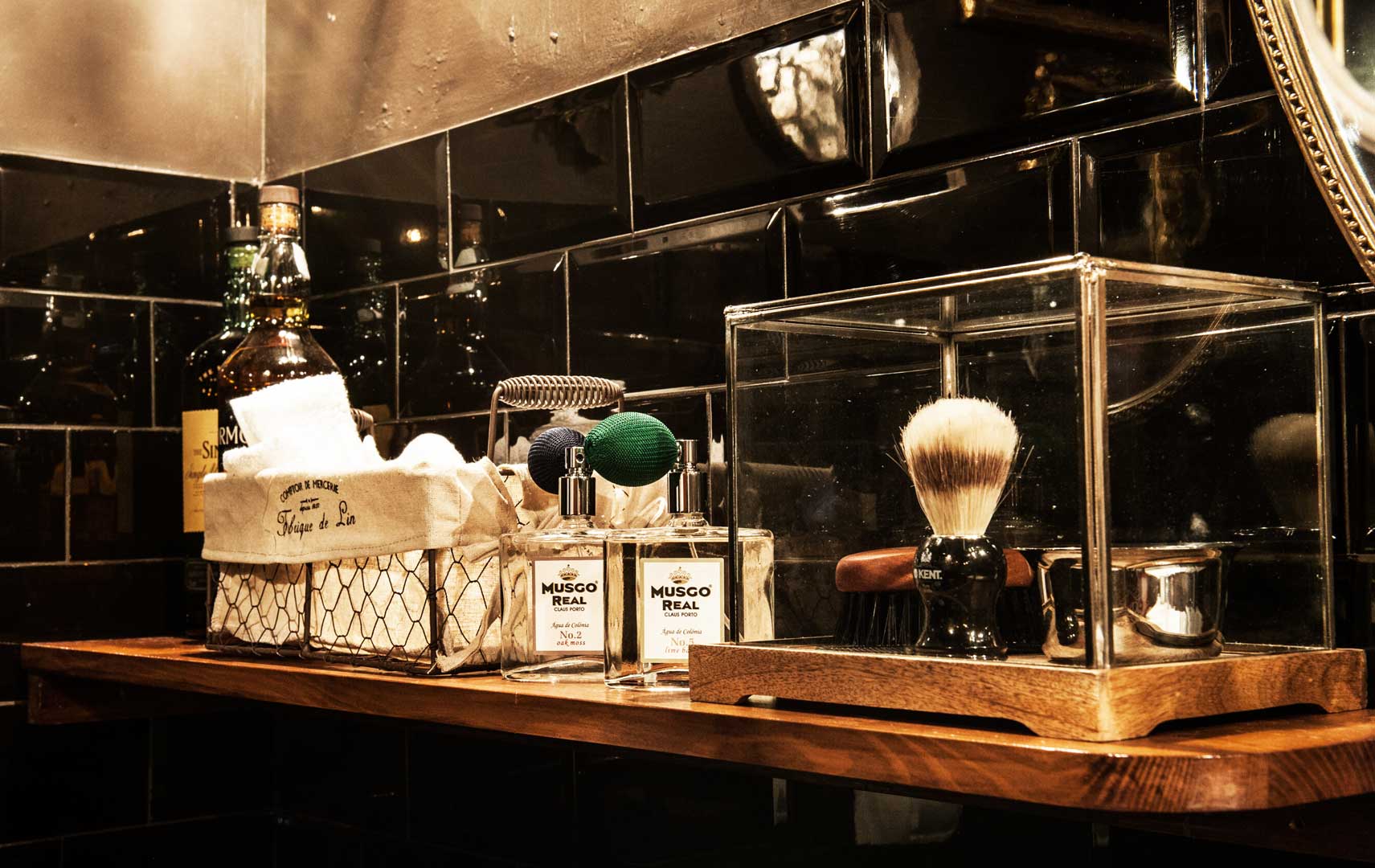 The boys of MAG came up with another idea: the Take Away. Ripa di Porta Ticinese 43: small, tiny, the smallest in the world. But, at the same time, great. With its concept of Drink–Away the BackDoor43 (same owners of Mag Cafè, 1930 Speakeasy and Barba) made the Naviglio a huge open-air lounge. Escaping the constraints of a chair, taking possession of the city, drinking quality cocktails. This is the revolution that these 4sqm of intuition lead to Milan. 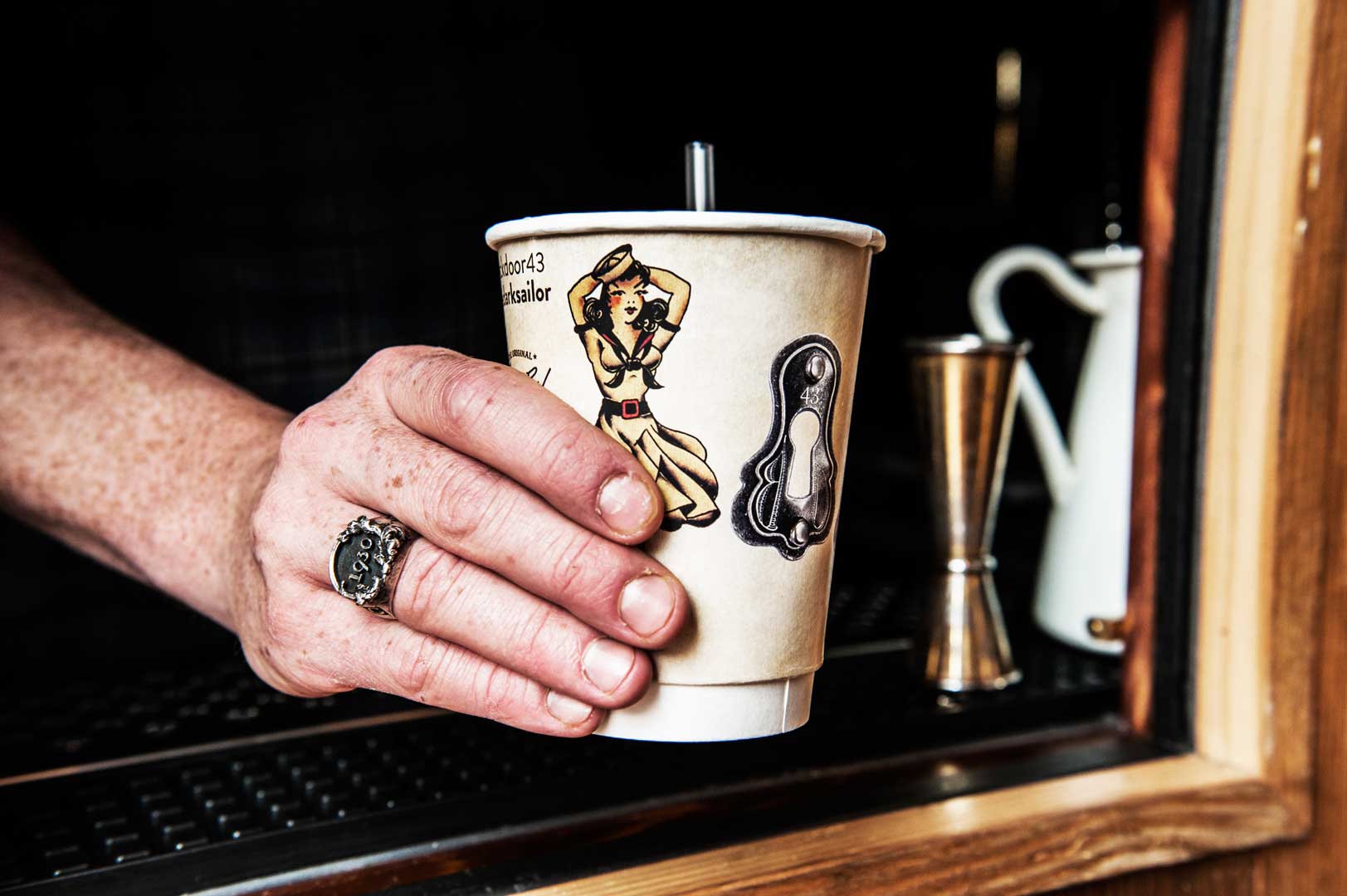 Flawless Milano spent a night behind the scenes with Mr. V., the creator of the cocktails. It was great seeing, from behind the peephole, the fascinating expressions of the customers who are discovering this new MAG Drive concept. Amazed, intrigued and fascinated by the technique of preparing of the mixologist behind the mask. A night spent laughing at the interactions between the masked and goers waiting for their drinks. Improbable dialogues, funny exchanges, humor, teasing, sarcasm. 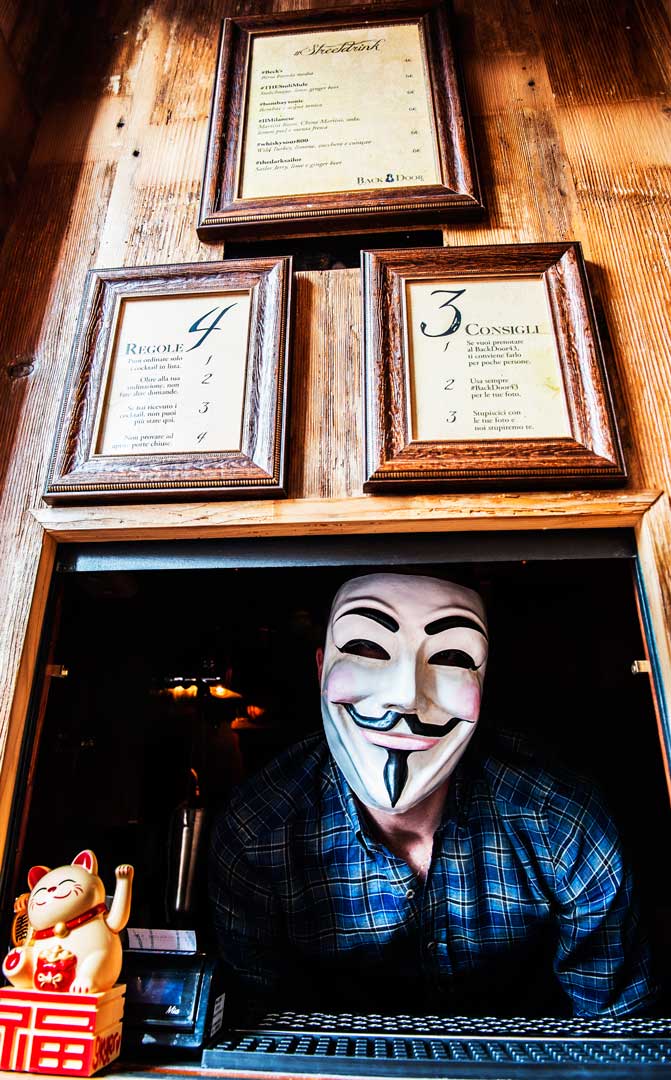 Mr. V. was really nice, but if you don’t carefully read the rules posted on the wall, you make him angry. Yes, he has a mask, but he doesn’t have filters: he tells you straight away everything he thinks. Some acute clients tease him, but he always has a ready answer. The vocation to astound does not end up with this ingenious and funny idea, that above all it makes our life easier when we are thirsty: behind the window a gift for its customers. The sensitivity of the audience will have the opportunity to perceive the interior. One of those pedal cars of the 30’s: a two-seater that looks like a slow-motion braking time. 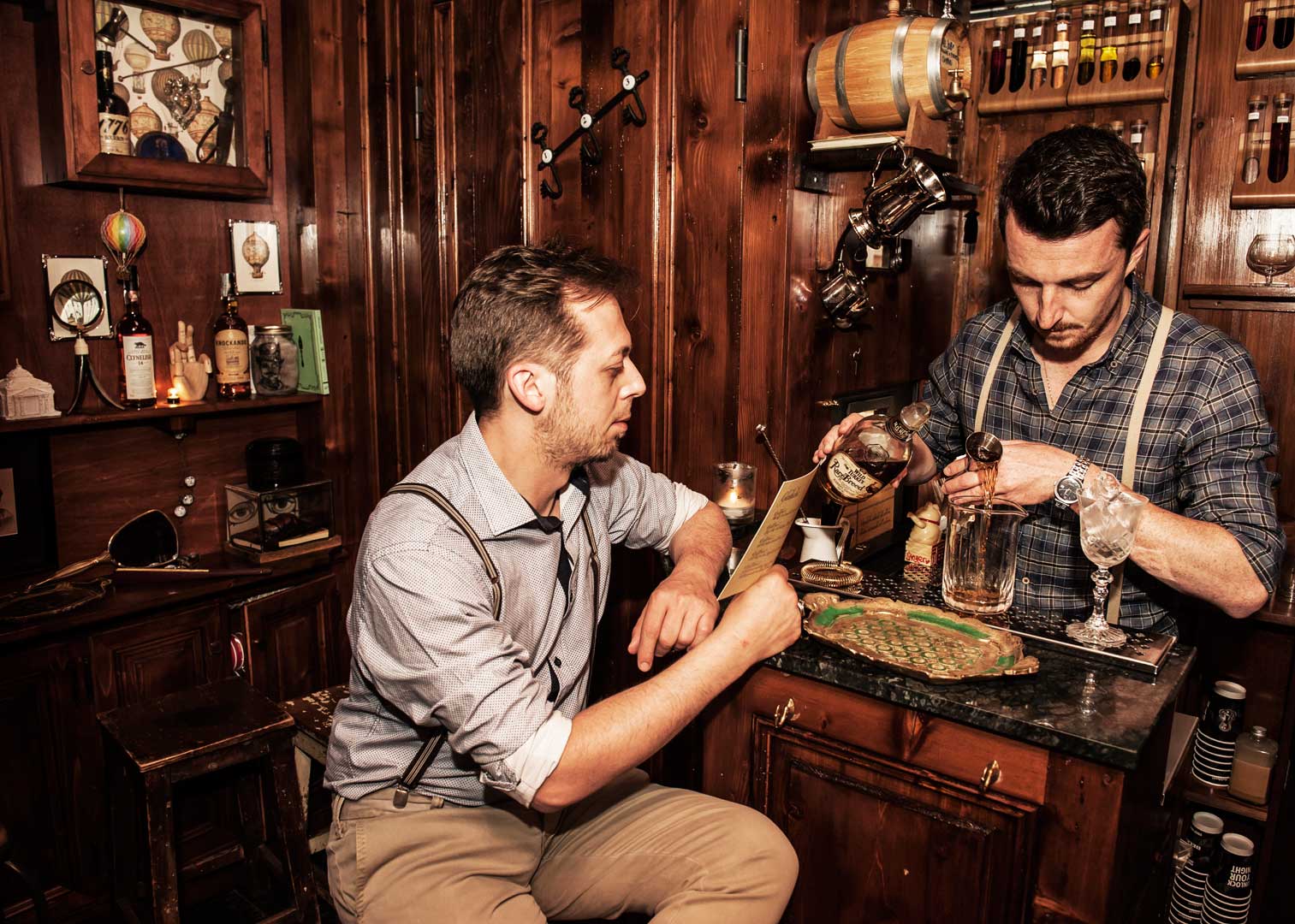 While I’m writing – sitting on the bank – I’m ordering more than a few drinks. I can resist many temptations, but the provocation of a 6€ #WiskeySour800 forces me to surrender. I think back to my experience in the dimension behind that door. I try to explore the reasons for the success of a Drink-Away in Milan. I sense some of the ingredients: a dash of unpredictability, a few drops of creative genius, ability to predict the future at will and, a sprinkling of the past which has preserved authenticity. It was famous before being born. Announced in an unusual way. Thousands of books scattered around the city revealed its opening through the clues. The lucky finders of the texts that were hiding the traces to find the place, for months have been trying to solve the riddle (read the interview released for the opening). 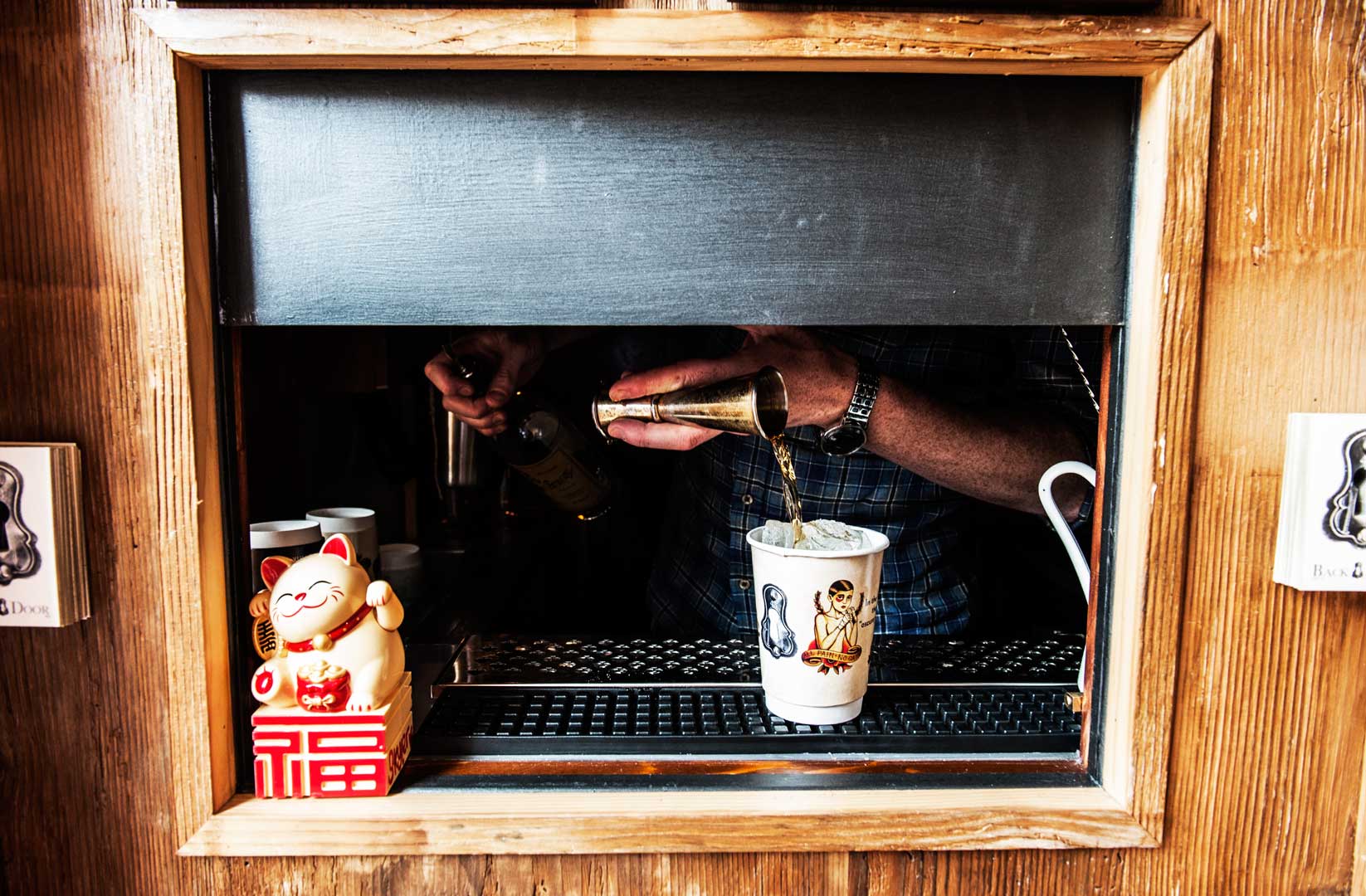 Now that we’ve discovered the location, from 7:30 p.m. to 3:00 a.m., we can live the luxury of contemplation of every detail of this room, where the bathroom is bigger than the room itself. Its menu is renewed every month. You can take it home with you in memory of the evening. At year-end dialing the puzzle you will have your personal canvas signed Backdoor43. Flawless advice: be sure to find out the dark chocolate into the lounge. Go in two, ask Mr.V and share every cocktail tasting them in small quantities. Savour more masterpieces, it will be the delirium of your senses. 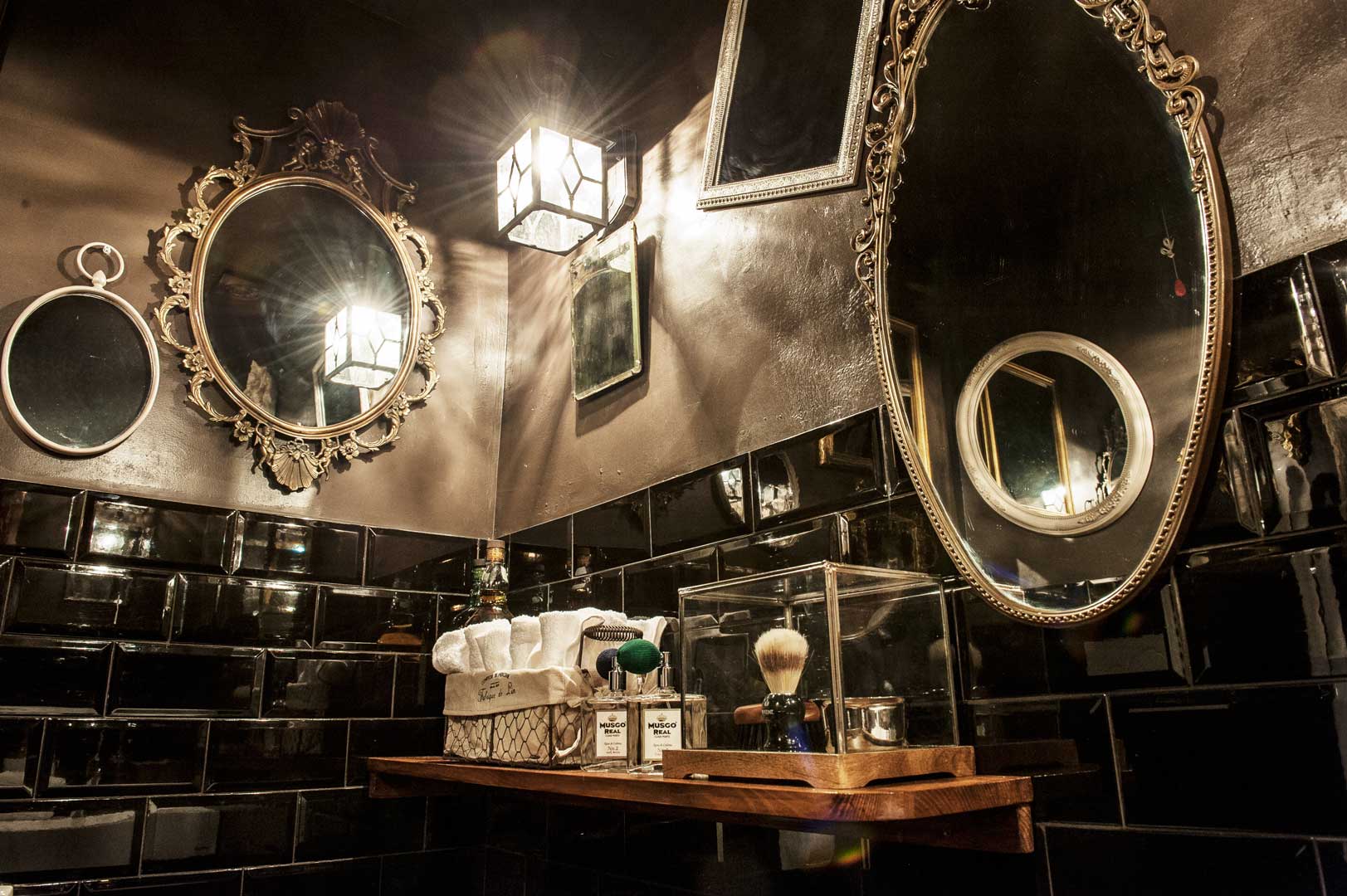 If you are not already in Ticinese – and you’re still reading – last Flawless tip: equip yourself to take a good picture of the lounge and post it on the socials with the hashtag #Backdoor43, the best wins a prize very envied. Now you have to guess the #BackDoor43 song. Need a clue? Hans Zimmer, the author of the soundtrack of Sherlock Holmes.

If there is one thing that the Mag Cafe is always able to do, it’s surprise. The novelty and constant change are its strong points and once again we will showcase this. Every six months, the largest MAG Cafè family creates a new drink list to blow your mind. This time, although it was - as always - the [...] 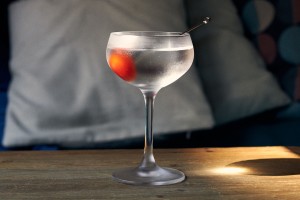 A large family, a close-knit team of bartenders hides behind the Farmily brand , a project born in 2016 that continues to grow and evolve. Their mission is to create "botanical" spirits, with herbaceous aromas, which are the result of a skilled research team. The goal has always been to "drink better" (and, consequently, more, which is [...]

Although it opened a few years ago, little is known of 1930, even now. The sure thing is that those who cross the threshold are ready to leave Milan to take a step back in time, to distant eras. This highly-talked about cocktail bar, which is part of Flavio Angiolillo & Co .'s empire of meccas of good drinking, [...]

Per aprire la classifica su Google Maps, clicca qui. As summer progresses at a brisk pace, there are those who have already gotten their dose of vacation and those who, instead, chase after the idea of ​​sunny beaches, diving into the sea and fiery sunsets. In Milan, where the heat can get quite stifling during [...]