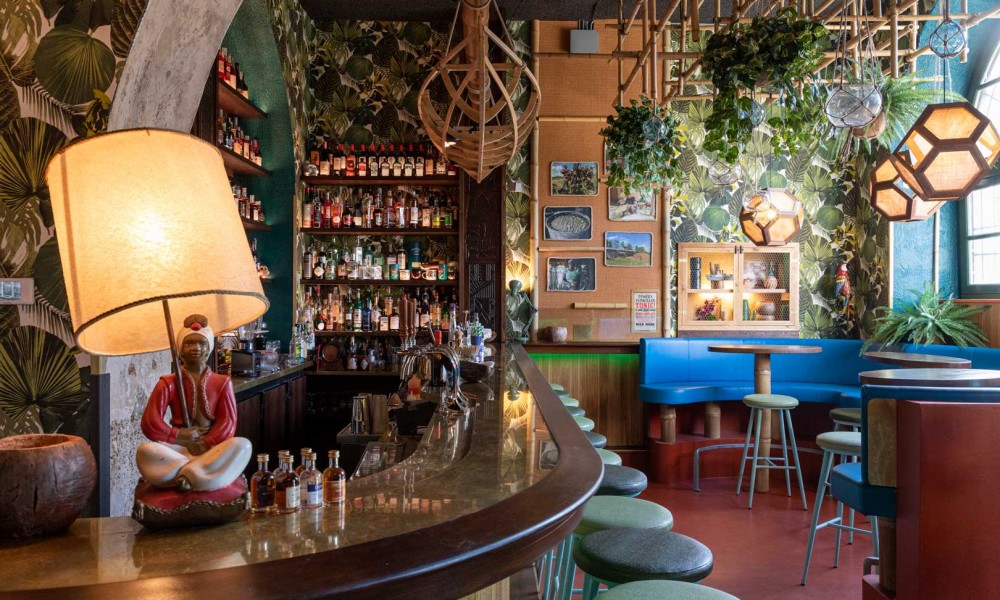 The best cocktail bars in Milan open in August

These spots will console you during this hot month

The summer months in Milan are always a bit special. The city, which vibrates with sparkle throughout the year, takes on an unusual tranquility: the streets are empty (to the delight of those with cars) and the crowd takes a break.

Those who are forced – by circumstance – to stay in Milan, know well that in August most of the clubs, ice cream parlors, shops and restaurants close their doors for a little deserved holiday. If you are reading, you are likely lovers of mixology who cannot leave the city. Know that you have nothing to fear:  you won’t be deprived of good cocktails to toast with and aperitifs with a capital “A.”

To keep you company, in fact, these cocktails take care of them: here is where you can go in these weeks to refresh yourself and enjoy this moment of quiet. 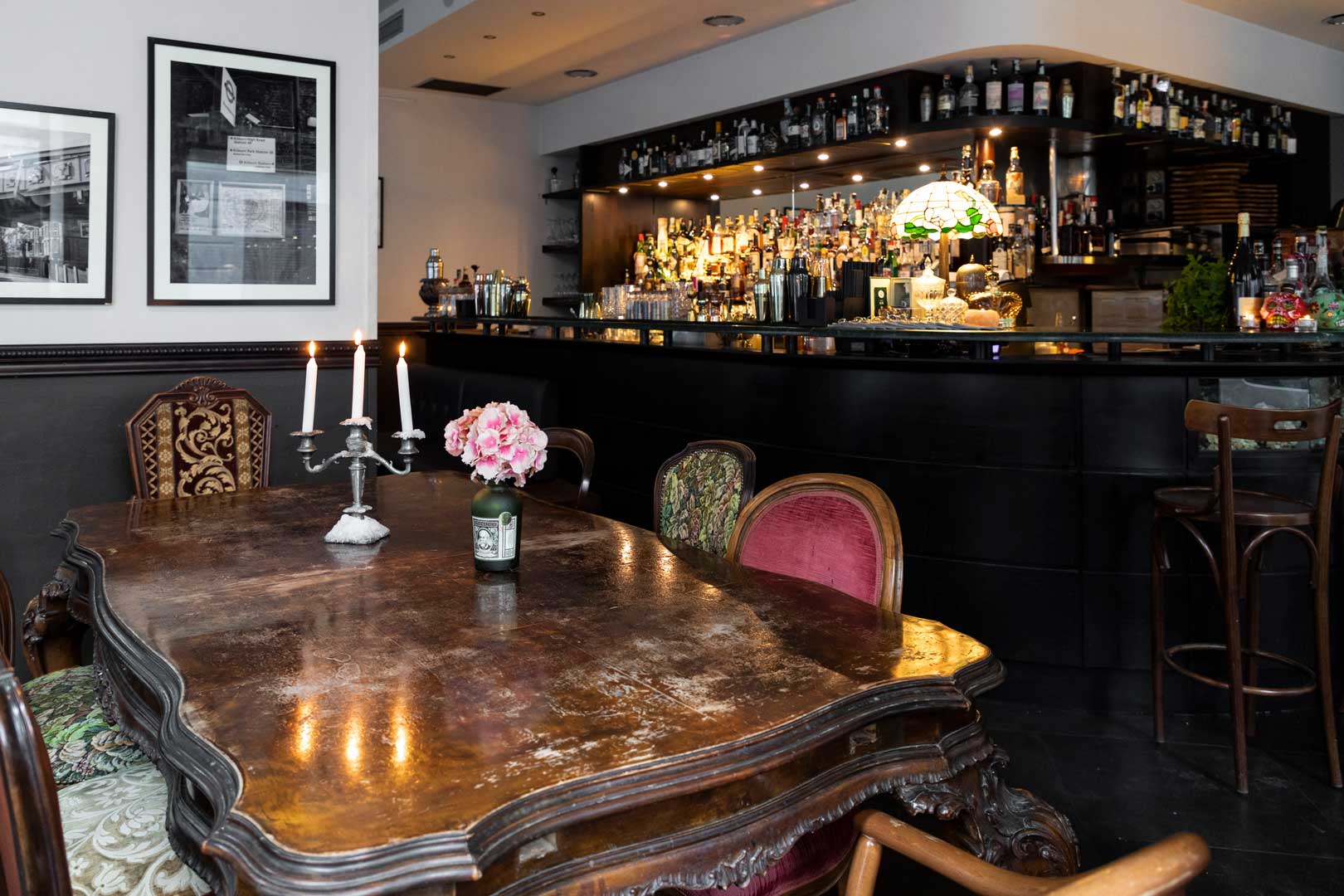 Kilburn is the totally British bar in Porta Venezia where customers are welcomed with a familiar atmosphere reminiscent of a living room. Behind the wooden counter, the patròn Ennio Lettera gives vent to his skills as a bartender, satisfying everyone’s thirst with refined drinks. There’s a riot of aromas, colors and flavors, prepared with only whiskey, selected rum, premium aromas and elite and luxury spirits. Here, you take part in a real sensorial tasting journey between mixology and gourmet gastronomy. For happy hour, take note of the Floral Spritz! It’s a refined reinterpretation of the usual spritz, which almost resembles a picture and which bears the colors of lavender flowers. 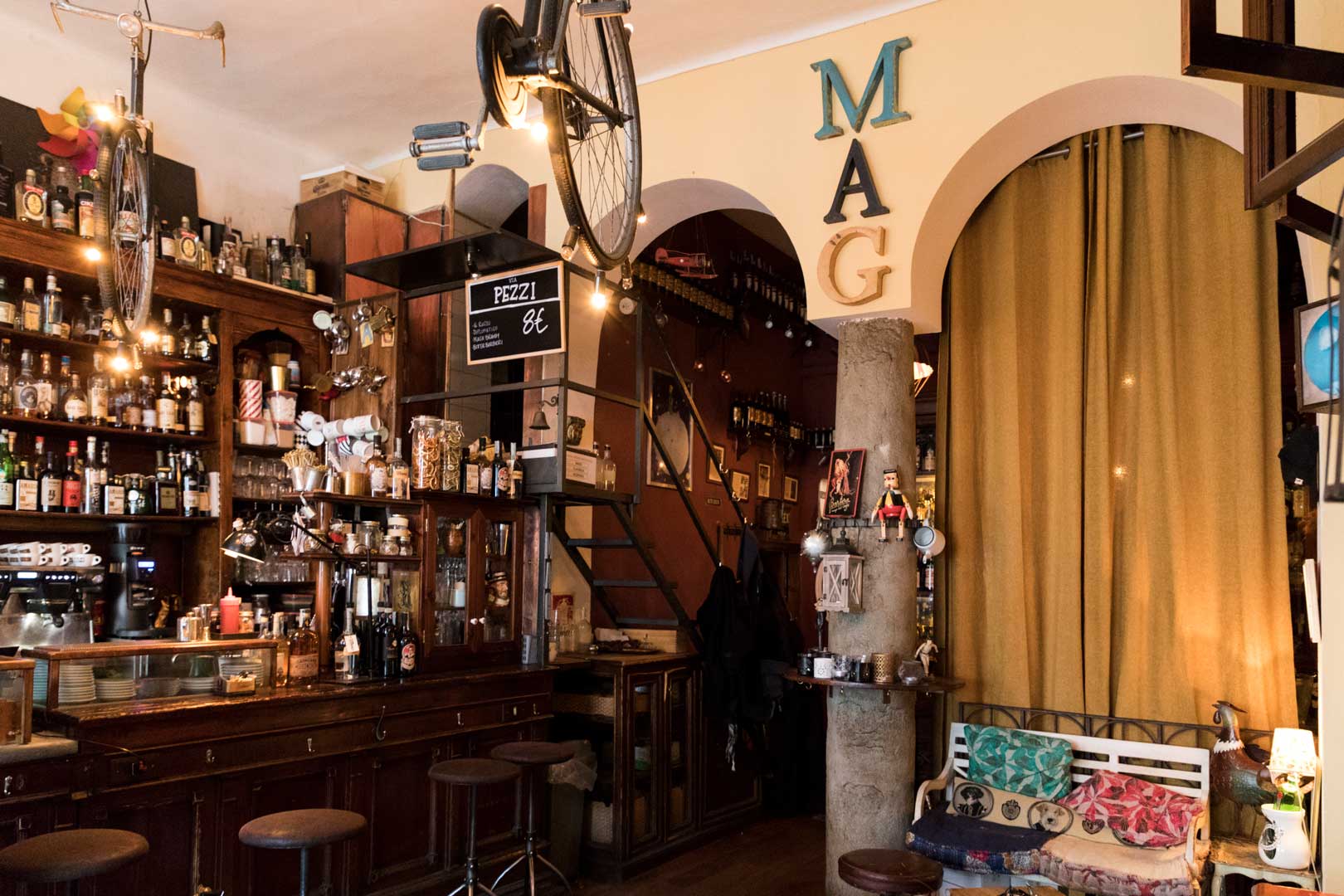 In the streets of Milan, that of Flavio Angiolillo and his team is now a real empire of cocktail bars devoted to mixology. The MAG Cafè, among these, is the headquarters. In the 1930s style, full of vintage pieces of furniture that dress the spirit of this place with an inexhaustible playfulness. Just between its walls, the border between fantasy and alchemy is narrowing, and the drinks are simply MaGnifici. Have you tried the new spring summer menu? If you have not already done so, you have the whole month to do so. Know that they could act as inspiration for your next trip, among the beauties, cultures, traditions and flavors of other countries. 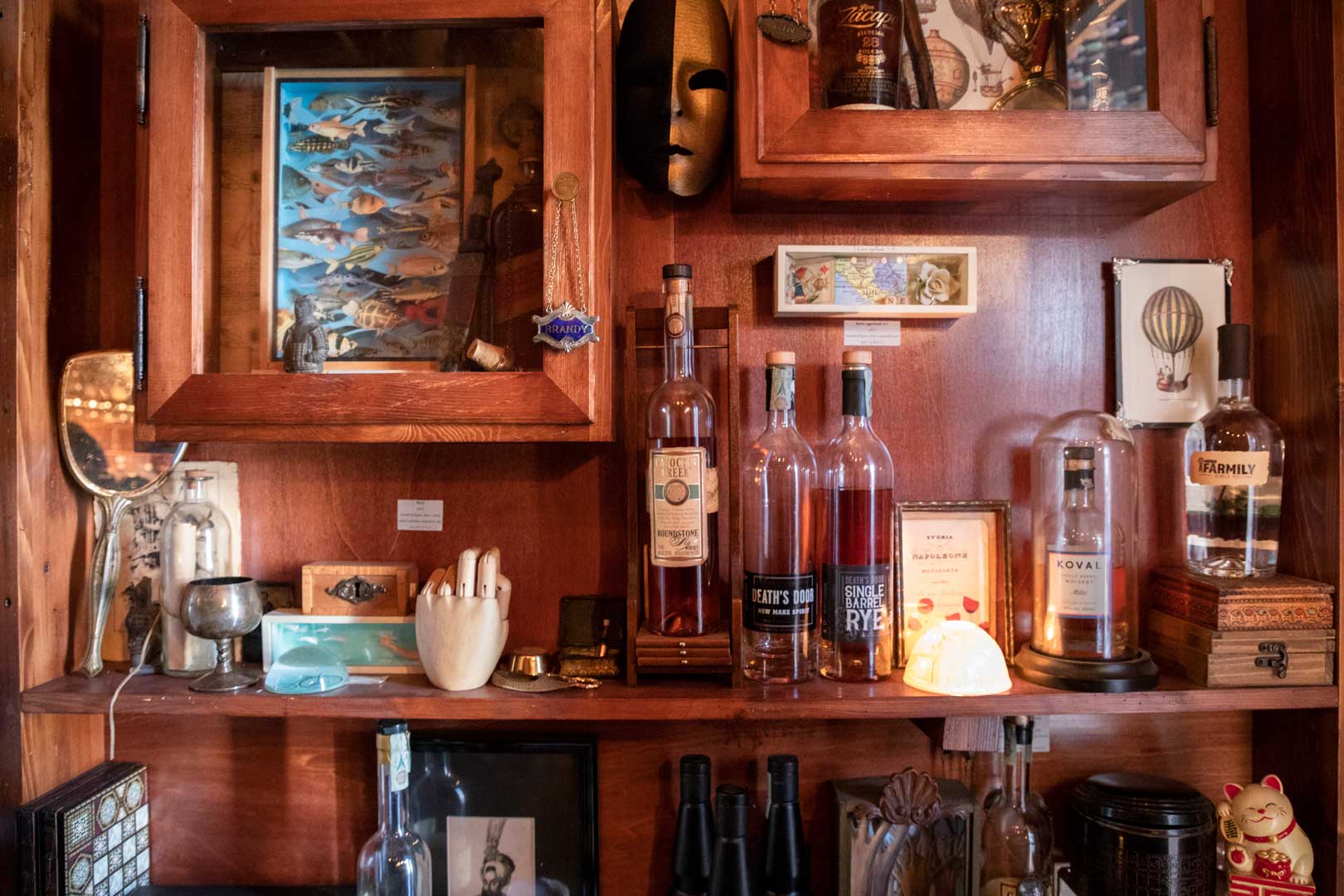 Four square meters of intuition, Backdoor43, one of the MAG Family’s products of creativity, holds the title of the smallest bar in the world and the merit of having transformed the Drink-Away. Quality drinking while enjoying the street and the city is now possible. With Backdoor43, we have all become spectators and protagonists of a sort of rebellion against the constraints of the usual local chairs. Those who have to stay in the city in August can therefore take advantage of the company of the mysterious Mr. V, the bartender with the mask behind the counter who will delight you with delicious cocktails! 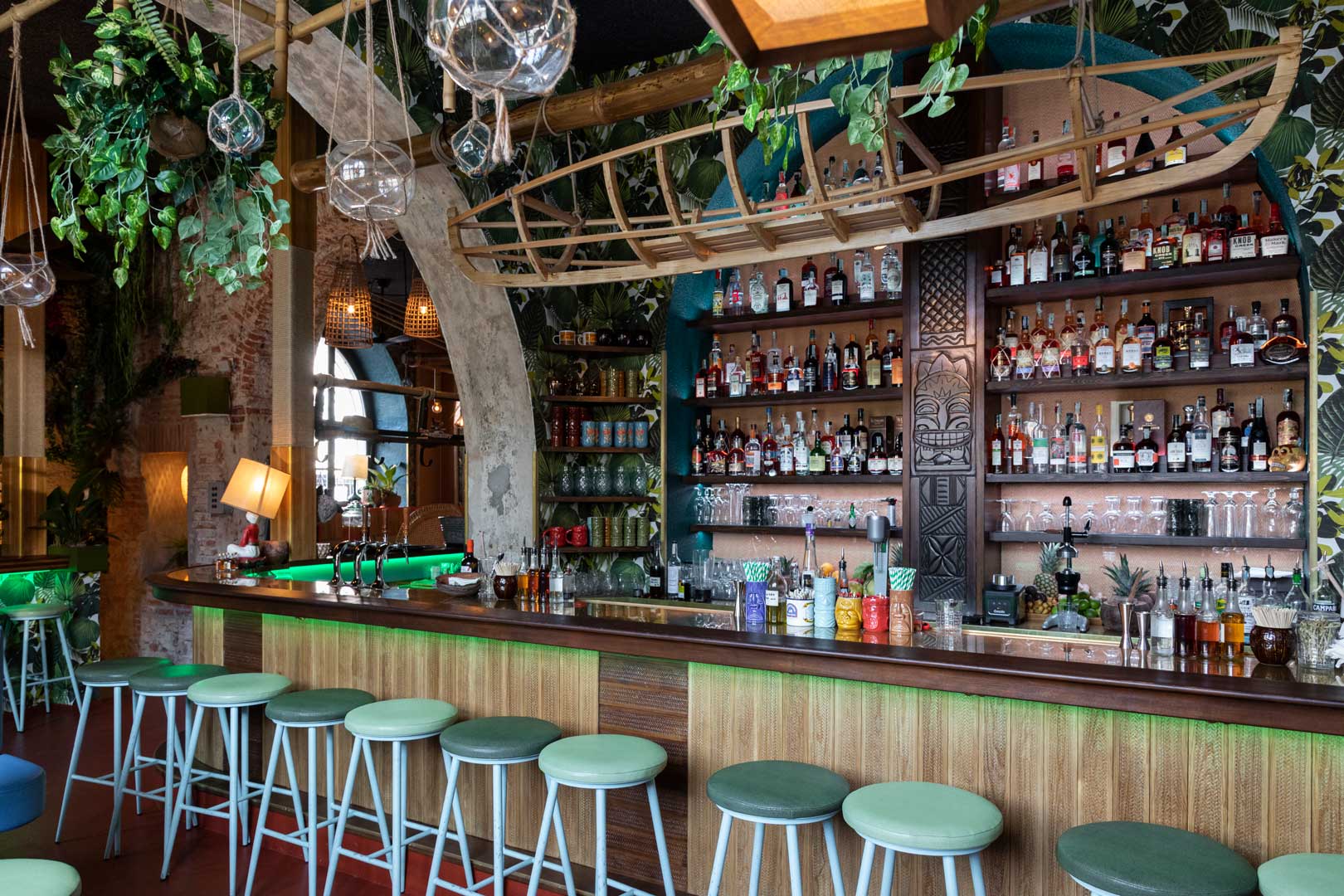 From Rita’s TIKI ROOM, the wind of exoticism blows a breeze that takes us directly overseas, to one of those deserted and paradisiacal islands that we dream of during the hot Milanese summers. The recently opened cocktail bar on the Naviglio Grande is a gastronomic gate with a direction to Hawaii, related to Rita & Cocktails. A place where everything, from furnishings to food and beverage proposals, is authentically marked by Polynesian and pop style and flavors. To discover the tiki mania – which we are sure you will love – and have an unusual, tropical aperitif, dinner or after dinner treat, you will have to go in person to try the unusual tropical dishes and drinks. Note the spicy chicken wings and the Don The Beachcomber. These are among our favorite combos! 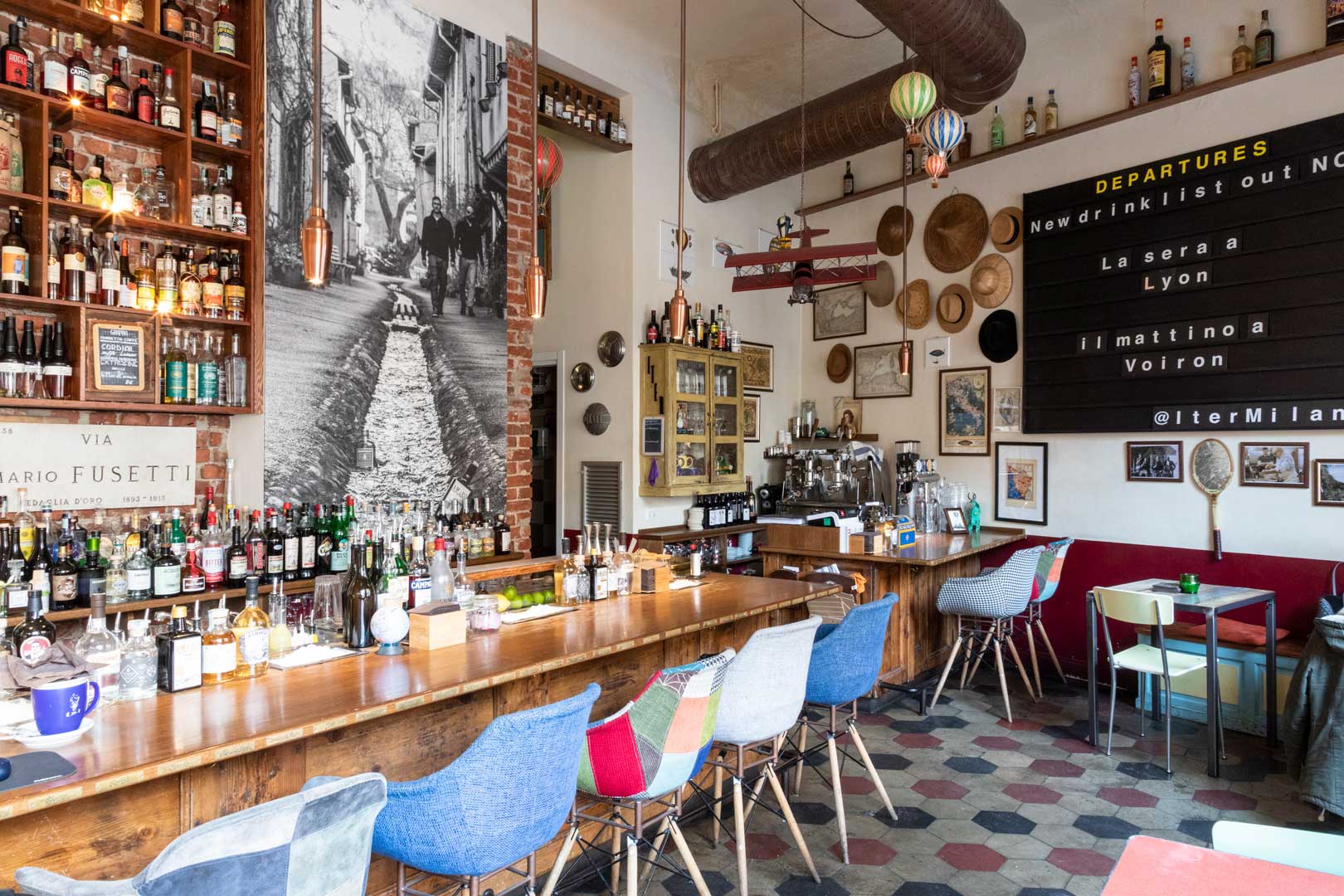 If you are not really talking about traveling right now – for one reason or another – keep this name in mind: Iter. The one in via Fusetti is not a simple cocktail bar, but a “gastronomic airport” that ideally catapults “From Italy To the World.” Get ready for this summer: the destination chosen by the team and bartenders of the local chameleon of the Navigli is the south of France. An augmented reality menu awaits you, which tells a city, a zone, or a southern region of the country of love in words and images – without ever forgetting Italy. We really like Margarita di Savoia. 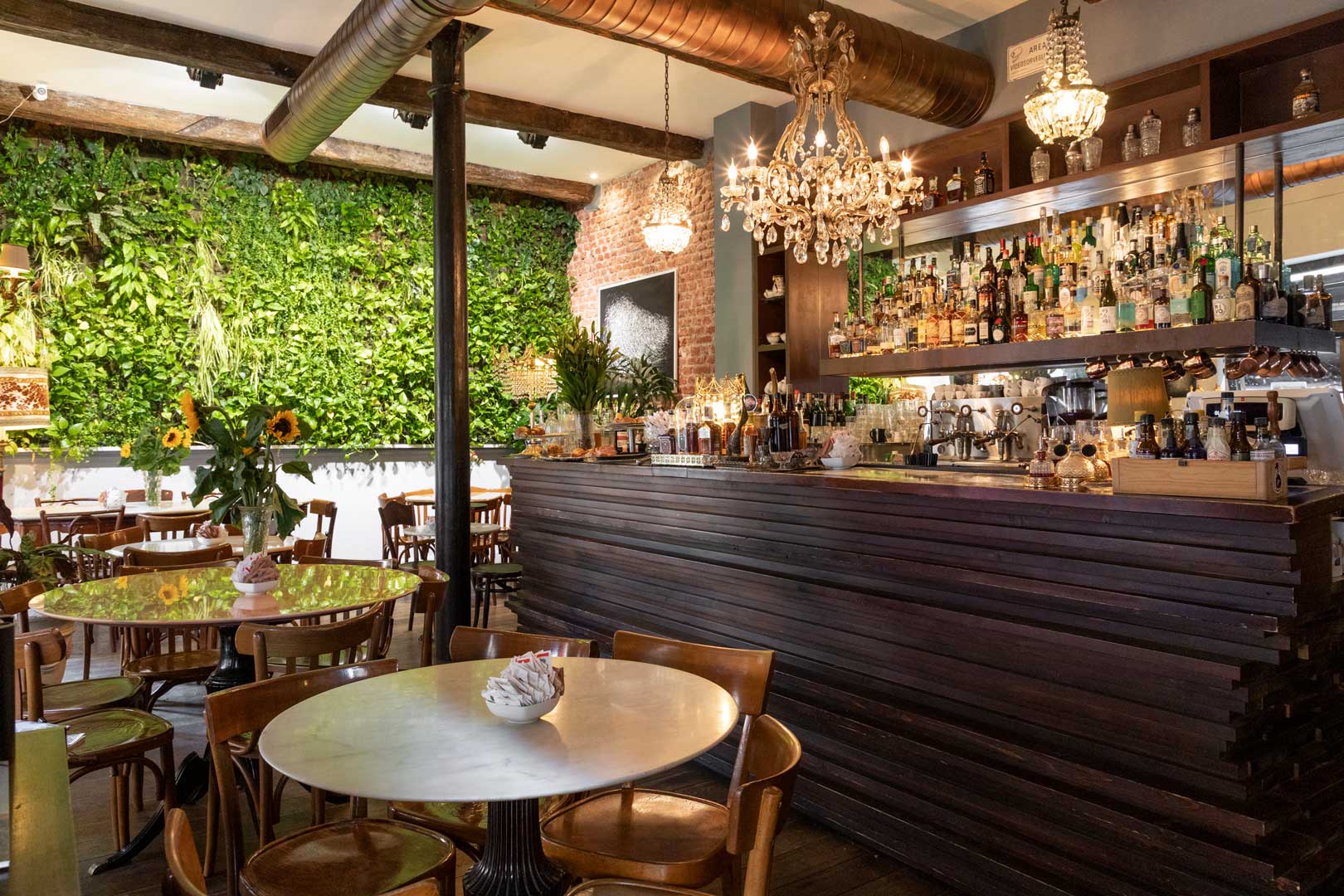 Good food, spirits and nightlife are the soul of Eppol. It’s a bistrot and nonconformist cocktail bar that combines elegance and grunge, foreign and Mediterranean, as well as a meeting point for different activities. This retro, vintage-style location has no intention of closing even in the hottest month! The staff and bartenders are waiting for you to refresh and delight you with an excellent drink list, which mainly accompanies happy hour and after dinner. Rich in ingredients and special recipes that are processed with new cooking techniques, spices, aromas, syrups and home made goodies. Great attention is also paid to the appearance of the cocktails, which are treated with decorations and beautiful garnishes. Curious to discover their cocktails? 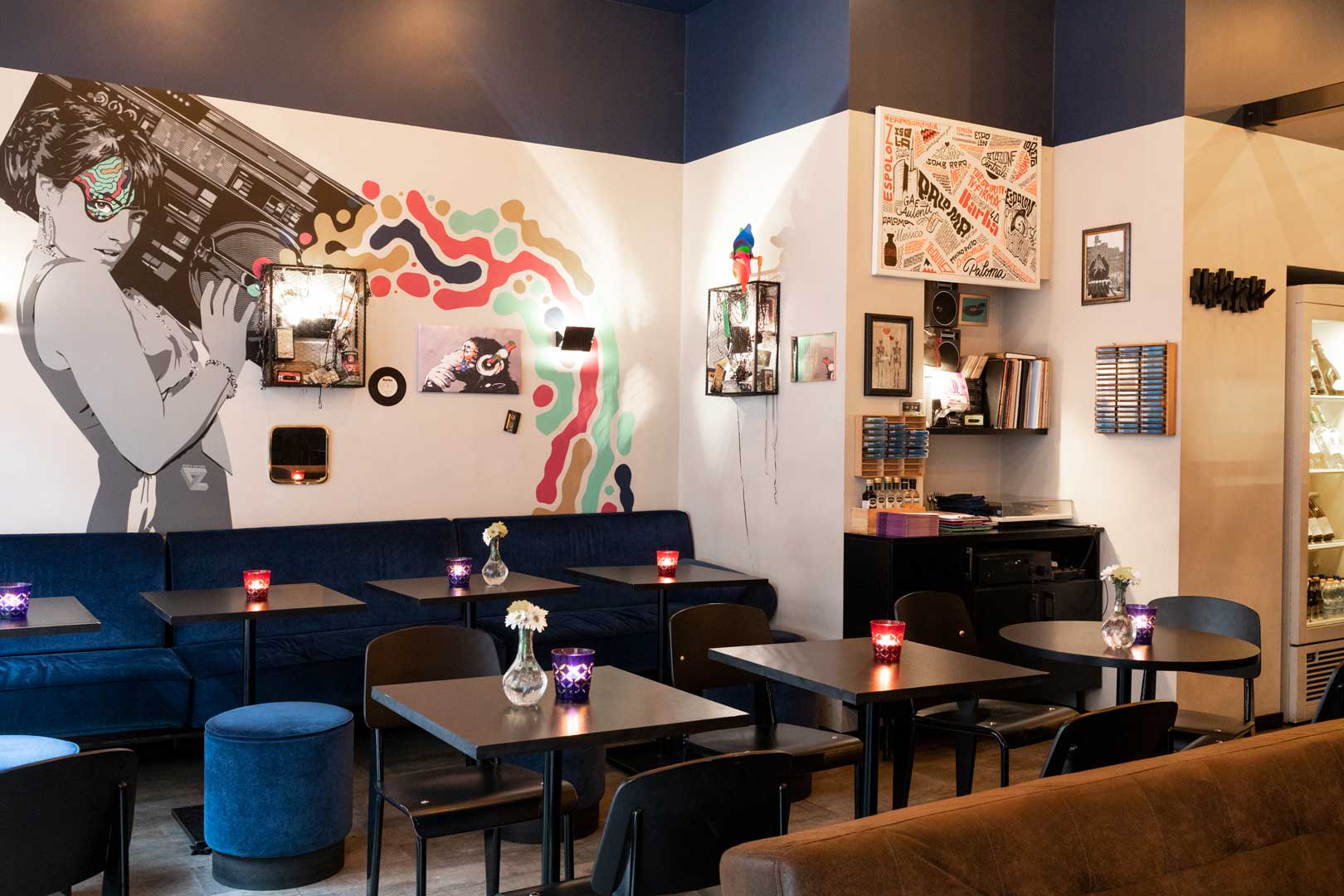 Barba thinks about vibrating the Isola-Garibaldi neighborhood with rhythmic playlists: the last child of the cocktail bar empire of Flavio Angiolillo & Co. is very much in love with music and has a passion for vinyl, so much so that the menus are below form of 45 turns. The restaurant offers seasonally creative, themed drink lists, which from time to time celebrate the eras that made us dance the most. A short time ago we had made a jump in the 90s, now it’s the turn of the 2000s; therefore, if you are curious to discover or simply relive some sounds of this period you just have to take the best group of friends and go to toast here and refresh your memory with a few drinks. 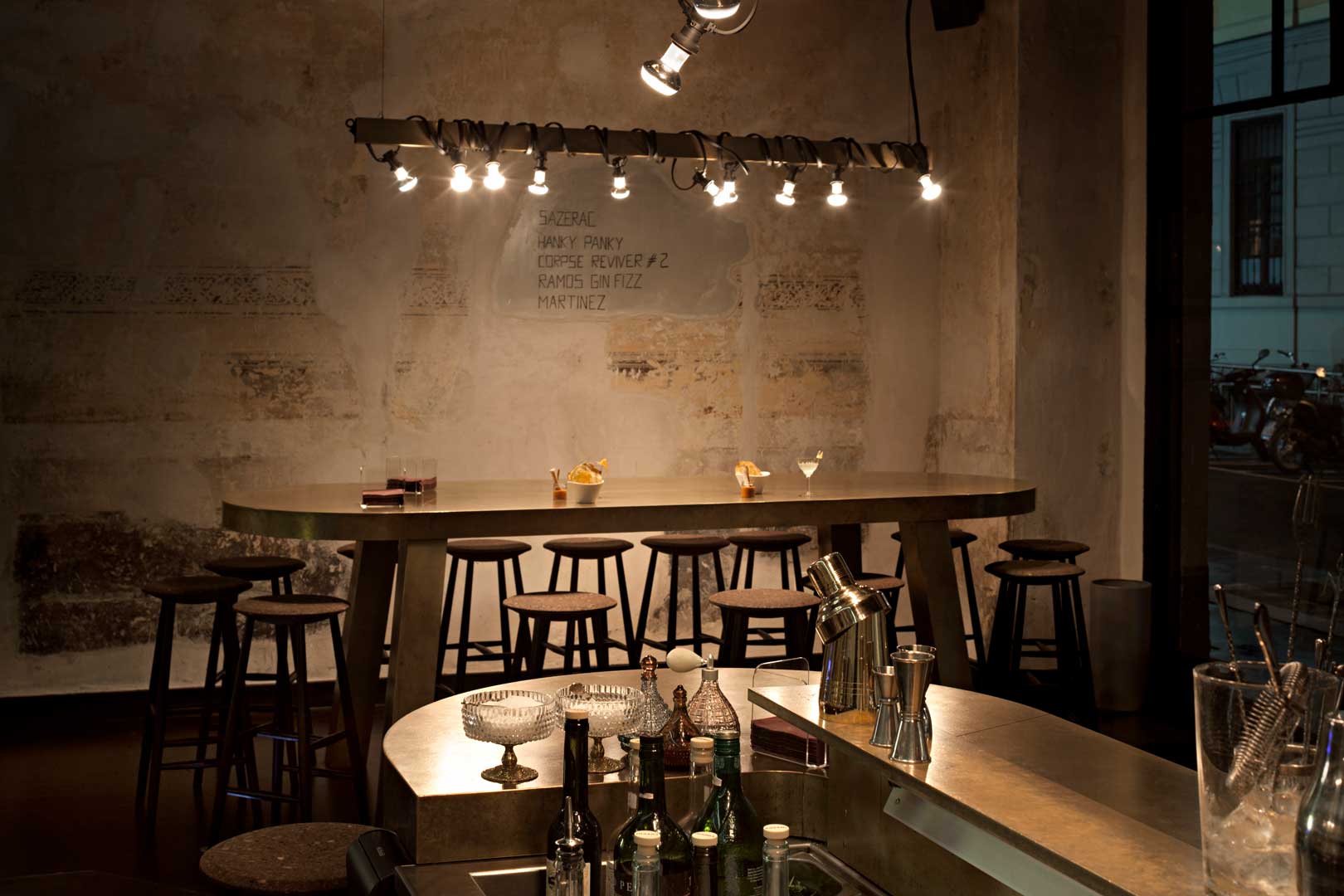 The term “Dry” at the time of Prohibition literally meant “dry,” or alcohol-free. In this restaurant, cocktail bar in via Solferino, on the other hand, it takes on the tones of a bizarre anti-phrase. The stars here are the drinks that are exceptionally paired with pizzas and gourmet focaccias. Dry Milano is a concentrate of chimerical contrasts, and right here even the kitchen knows no breaks, not even #aftermidnight. From Tuesday to Sunday, the people of the night will be able to taste some specialties of the chef, Lorenzo Sirabella – studied ad hoc – starting from midnight, until one o’clock! 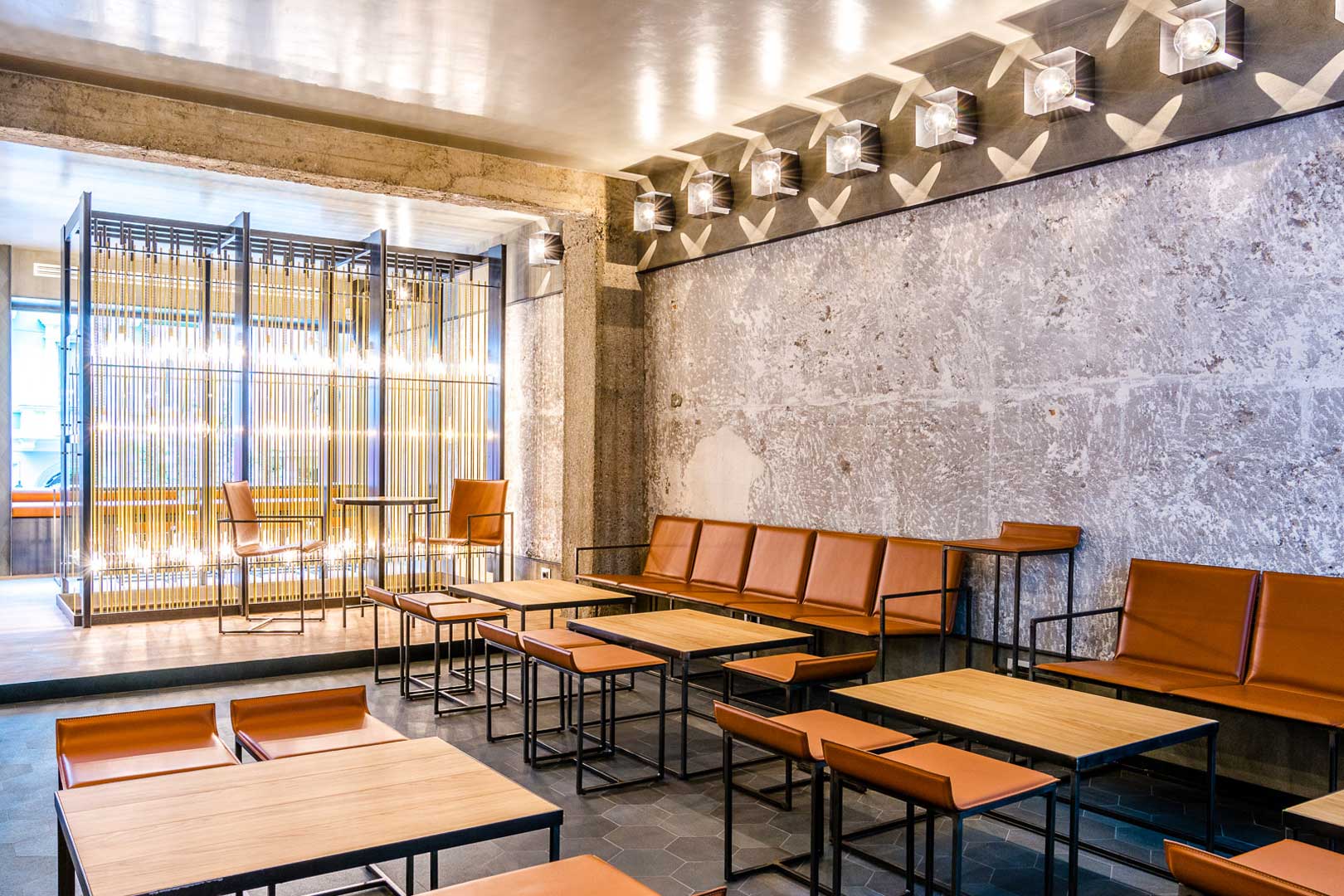 Aperitifs and after dinners while contemplating the beauty of the Gucci Art Wall are what’s in store at Chinese Box. For some years now, the nightlife of the area has been crowding the sidewalk of the now iconic Corso Garibaldi venue. This is a cocktail bar with a minimal design and a family atmosphere, inside which – once you have crossed the threshold – the attention falls on the long counter of seven meters and on the battalion of exposed spirits for your viewing pleasure. With the city clearer than usual, perhaps you will also be able to find a place in the coveted outdoor area. 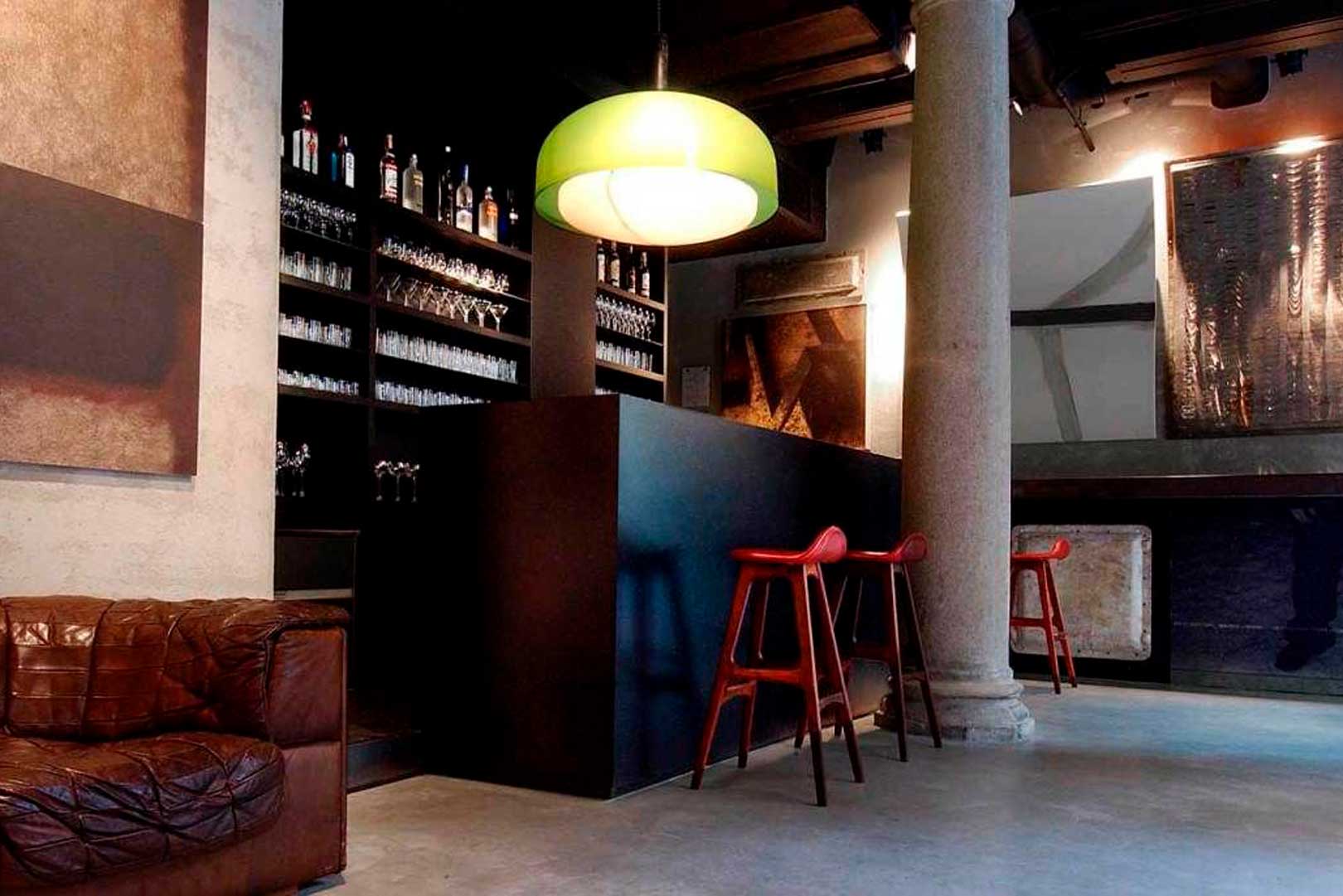 The STRAFbar, the window on the street of the well-known STRAFhotel, could not be missed. As a reference point for travelers and true lovers of Milanese nightlife, it is a happy island made of small talk and aperitifs animated by live music and DJ sets . Attentive but not informal, it reflects the concept and style of the hotel. From sunset onwards your drinks will be accompanied by the sounds of a beautiful musical selection which, as always, marks the times of one of the most popular street happy hours in the capital. 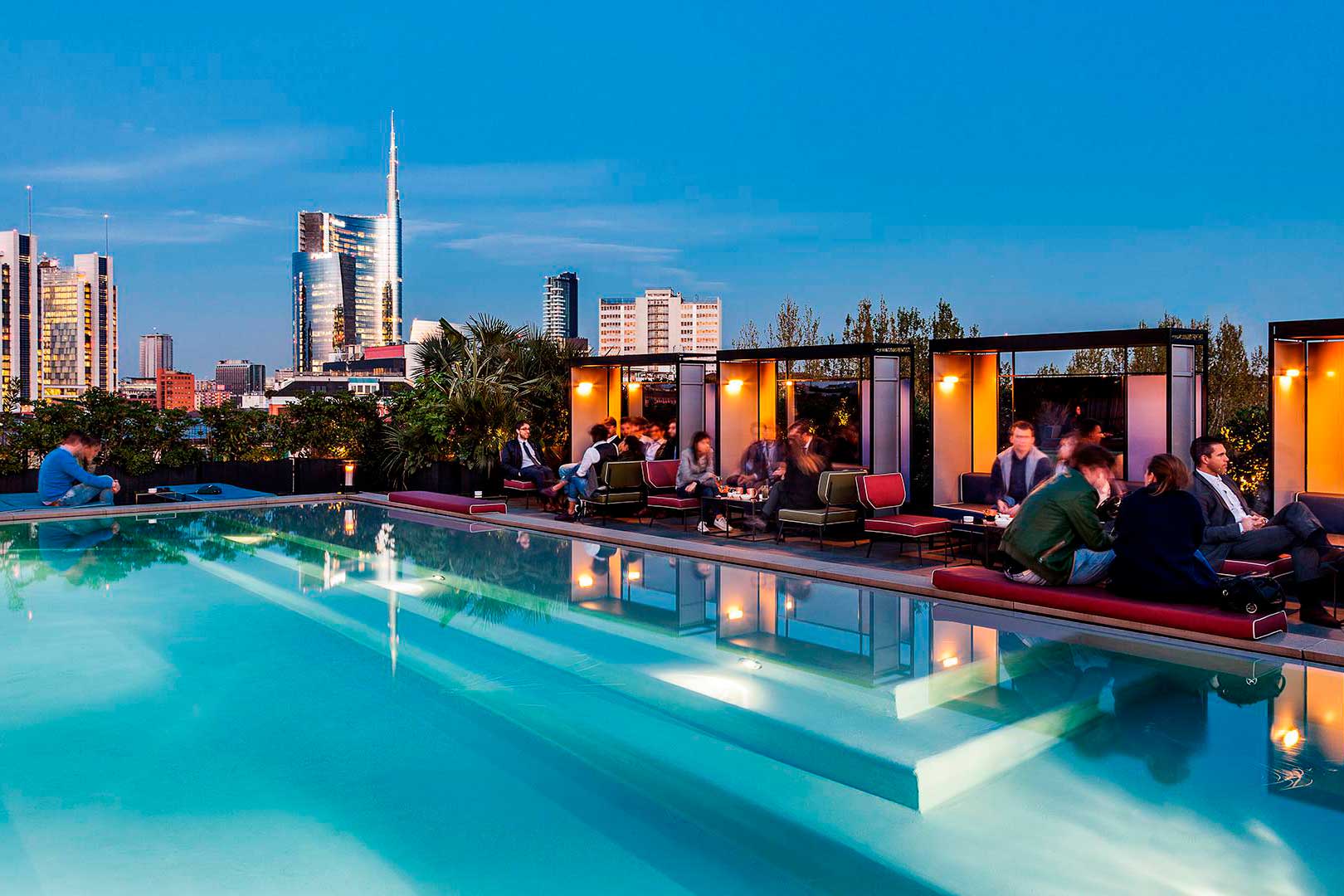 If the Milanese architecture is too narrow, you can only take refuge at Ceresio 7. It’s one of the most chic, design rooftops in Milan, that offers real escape from the usual streets. So, treat yourself to an appetizer by the pool with delicious food, and if you stay, go for an extended pitstop for dinner, all with the city skyline in the background. In this oasis of tranquility, you can breathe an international air and you will feel like you can touch the sky. 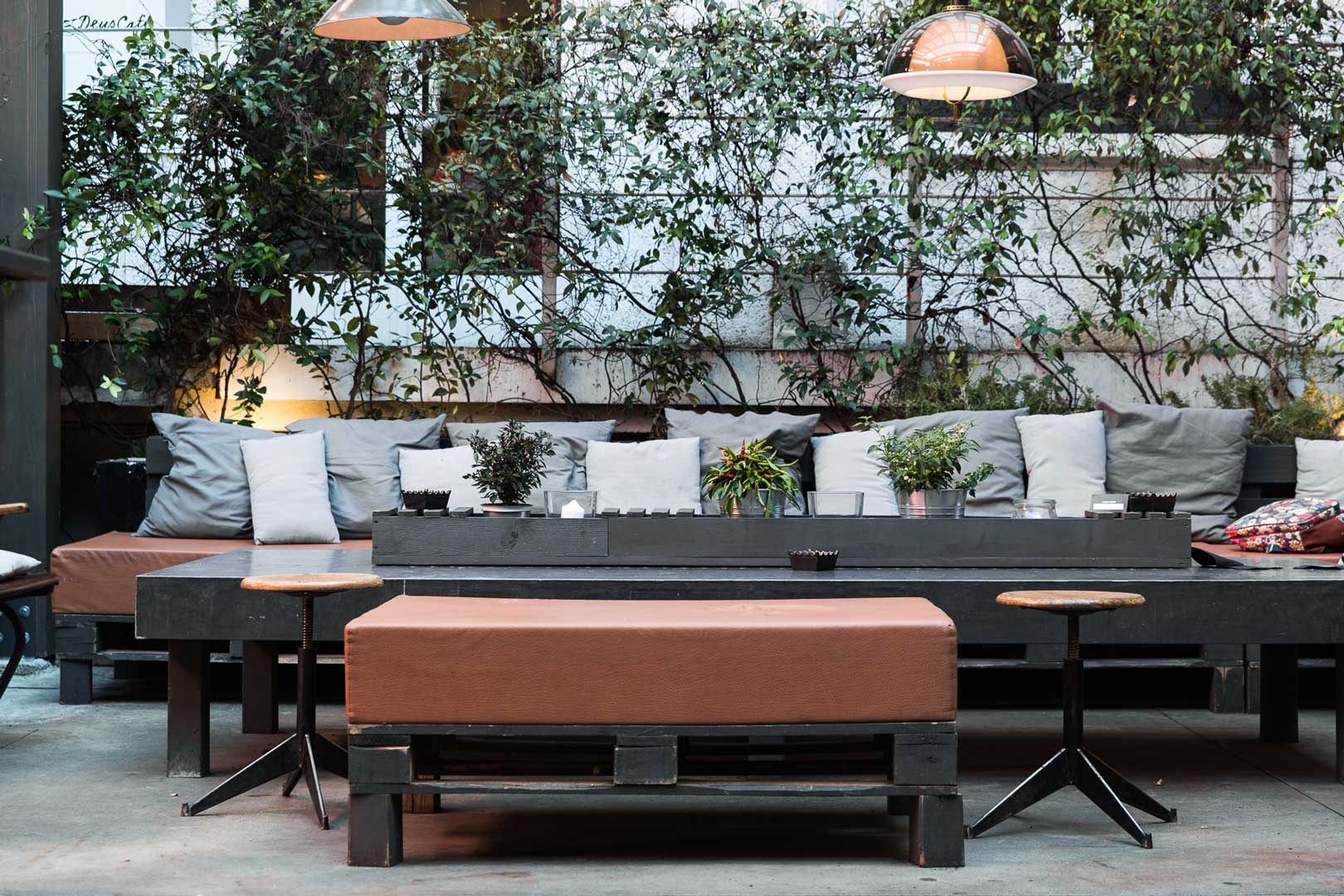 Open every day at almost all hours in one of the busiest districts of Milan, this is a temple for hunters of good drinking . At the Deus Café, the product of an Australian brand of motorcycles, bicycles, surfboards, clothing and accessories, you spend time in a delightful internal courtyard, dotted with pergolas with creepers and comfortable sofas. Here, there is never room for the frenetic rhythms of the outside world because the imperative is to enjoy and savor every moment calmly. 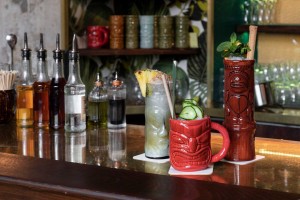